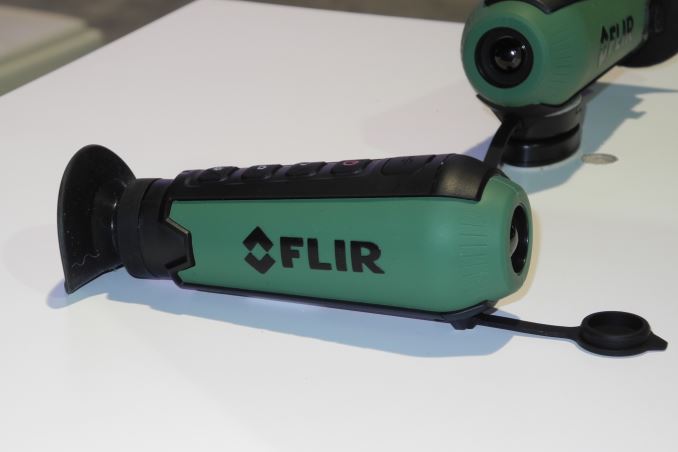 Thermal imaging has become more accessible to the average consumer, thanks to advances in the development of low-cost infrared sensors / microbolometers. FLIR was one of the first to make a breakthrough in this segment with the development of the low-cost Lepton sensor (80x60) that was used in the first-generation FLIR One Thermal Imager for iPhone 5/5s. In the meanwhile, Seek Thermal, a startup, debuted their low-cost microbolometer (206x156) in the Seek Thermal Infrared Camera.

In 2015, FLIR continued to make advancements in the sensor space with the launch of the Lepton 3, a 160x120 microbolometer. This sensor was used in the second-generation FLIR One cameras (including the Android version that we have been using in our reviews of mini-PCs). Seek Thermal, on the other hand, had entered the market with a higher resolution sensor. So, their focus has been on developing new products to widen the appeal / addressable market for that sensor. At CES 2016, FLIR demonstrated a couple of new products based on the Lepton sensors, while Seek Thermal showed the products introduced through the course of 2015.

The FLIR Scout TK is a stand-alone and rugged thermal camera with specifications similar to the FLIR ONE (i.e, the same 160x120 Lepton 3 sensor), but, meant for outdoor use. It comes with storage for photos and videos, and they can be transferred to a computer for further review. The FoV is narrow, meant more for viewing objects / animals up to 90m away. There is a 640x480 LCD display on one end, and the industrial design allows for one handed operation. The intended use-case is outdoor enthusiasts who want to spot wildlife in the night or in low light situations, as well as those interested in personal and home security. The product uses an internal Li-ion battery that is rechargeable. It can support up to 5 hours of continuous operation with a fully charged battery. 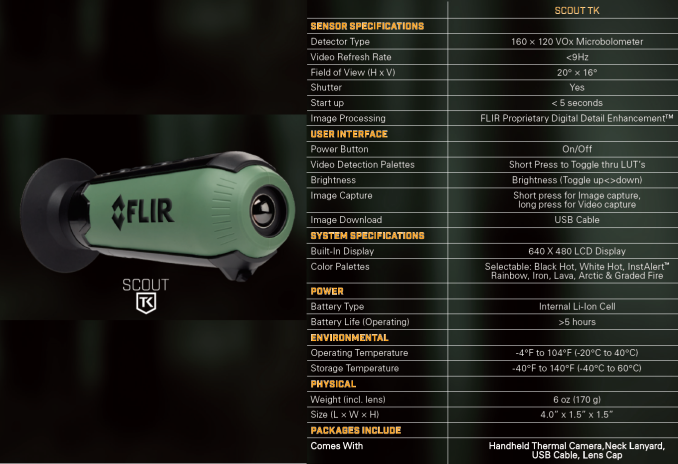 The TG130, a entry-level spot thermal camera for home and small businesses. It is based on the first-generation Lepton core (80x60 sensor). It is targeted at home users who want to find out insulation issues (places of heat loss in a house). It can also help in determining correctness of HVAC operation, electrical equipment troubleshooting, and refrigerator maintenance. There is no storage media to record to, as the usage involves pointing and clicking to freeze the image with the temperature being part of the OSD. The product uses 3xAAA batteries. It can support up to 4 hours of continuous operation with one set of fully charged batteries. 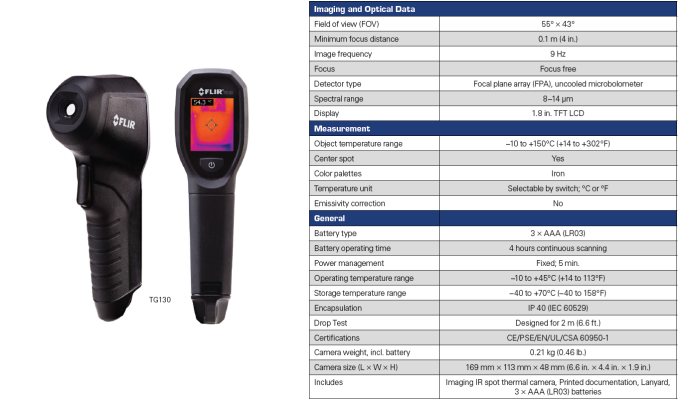 At the FLIR booth, we had the chance to see working models of both the Scout TK as well as the TG130 along with a host of other thermal imagers from FLIR targeting the professional market. The Scout TK and TG130 are both slated to ship later this quarter.

The Scout TK will be priced at $599, while the TG130 will be priced more economically at $249 due to the use of the first-generation Lepton sensor and lack of any recording capabilities.

In addition, Seek Thermal also demonstrated the Seek Reveal, which is very similar to the FLIR TG130 in terms of use-cases. The added capabilities include a 300 lm. integrated LED flashlight, ruggedness and the ability to withstand submergence in water. The LCD display has a 240x320 resolution. A micro-USB cable can be used to transfer recorded images. The device has a range of around 150m and has a 36 degree FoV similar to the Compact. All of the Seek Thermal offerings are still based on the original 206x156 thermal sensor. While the Compact and CompactXR retail for $249 and $299 respectively, the Reveal, with its in-built display and smartphone-free operation, retails for $399. 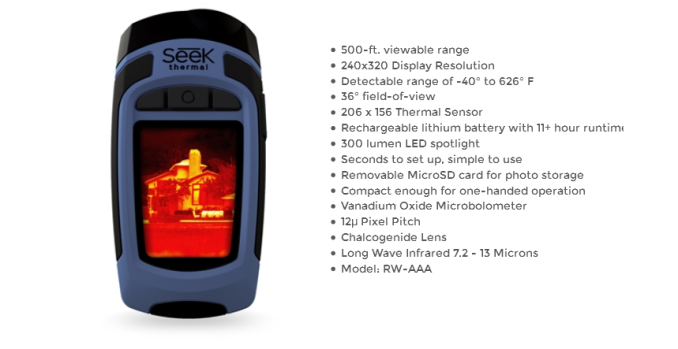 The offerings from FLIR and Seek Thermal have given consumers a wide range of thermal imaging products to choose from, depending on the intended use-case. We would like to see FLIR improve their Android app for better compatibility with a wider range of mobile devices. Hopefully, a future update to the Lepton series would help them achieve resolution-parity with the Seek Thermal sensor. That said, FLIR's MSX (one of the proprietary features of some of FLIR's cameras that blends the output of an image sensor and the output of the thermal sensor) seems to make up for the disappointing thermal sensor resolution to some extent. On the other side, we would like to see if Seek Thermal can bring in thermal sensors with better resolution at similar price points. On a common note, government restrictions still prevent thermal imagers from offering greater than 9 FPS for videos without going through extensive paperwork. Hopefully, the advent of low-cost thermal imagers like the ones from FLIR and Seek Thermal can help in making this situation better.