ECS Goes Skylake with LIVA One 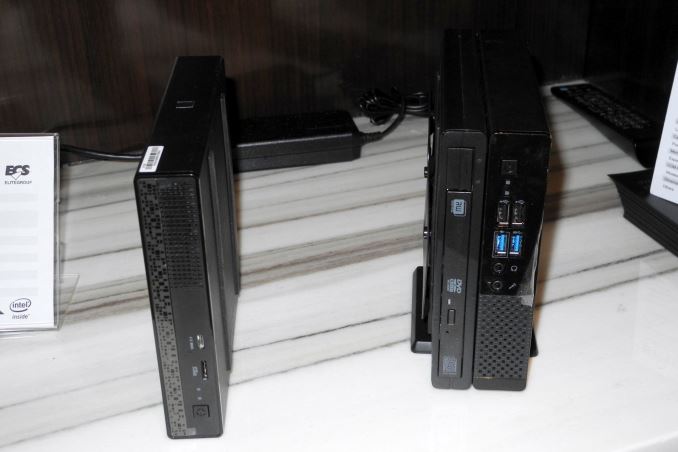 At CES 2016, ECS displayed their consumer-focused as well as OEM products to the press and business customers. On the direct-to-consumer side, ECS had some 100-series chipset boards on display, but they were all ones that had been announced before (like the Z170-Claymore). However, my main intention was to check out updates to the LIVA mini-PC lineup and also get some information on the 5x5 form factor that ECS had hinted at prior to the show.

In our Intel Compute Stick review, we had talked about the efforts made by Intel to take advantage of a second screen (such as a tablet or smartphone) when interacting with the PC. ECS also had something similar for the LIVA series. They have tied up with Insyde Tools to install necessary support for ShareKanTan on the LIVA mini-PCs that come with the OS pre-installed. In addition to the input options provided by apps such as the Intel Remote Keyboard, this app also allows for display of media on the PC in the second screen. 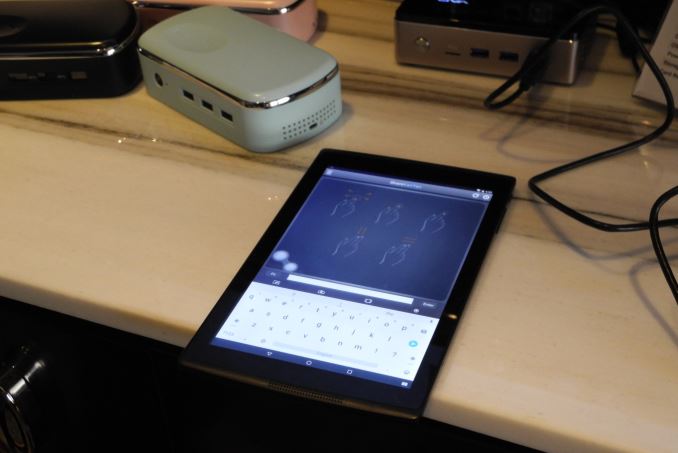 ECS also took the opportunity at CES to show off their latest addition to the LIVA lineup - the LIVA One. LIVA One is a Skylake mini-PC, which uses a 35W TDP -T class processor. Unlike other members of the LIVA family, this one is larger (1L volume - 173mm x 176mm x 33mm) and also actively cooled. The default configuration from ECS utilizes a Core i3-6100T, a LGA processor. The end user can actually upgrade the CPU after purchase, or install any other CPU after buying a barebones configuration. Even processors such as the Core i7-6700T can be used (as long as the CPU is LGA1151 and has a TDP within 35W).

The LIVA One uses 2x DDR3L SO-DIMMs.It has a free 2.5" SATA drive slot and also a M.2 SSD slot (SATA interface). The industrial design is stylish and functional, with the front panel including a microSD slot and a USB 3.1 port (with rapid charging features). The default configuration contains a 1x1 802.11ac / BT 4.0 WLAN card, but that can be changed by the end user.

ECS has also used the same chassis design for a mini-PC to target business users. This 'SF100' model will support Windows 7 officially. It also supports vPro (thanks to the Q170 chipset) and Intel SBA (Small Business Advantage) technology. Unlike the LIVA One's DDR3L SO-DIMM slots, the SF100 has the costlier DDR4 SO-DIMM slots that can provide better RAM capacity and performance. It also has a RS-232 port as well as a 2W in-built speaker. The SF100 also uses an Intel I219-LM GbE NIC.

Both the LIVA One and the SF100 can be augmented with an optical drive or extra 2.5" bay using a special 'HD Drive Bay' (shown in the top picture) that connects to the main system via one of the rear USB 3.0 ports. The LIVA One will be priced $168 for the barebones configuration and $450 for the pre-built default configuration. Pricing for the SF100 is not available yet.

Moving on to the mini-STX front (the official name for the 5x5 boards that we first uncovered at IDF 2015), ECS had one of the first motherboards in this form factor on display. The H110SU-02 (with the S standing for the mini-STX form factor in ECS's nomenclature) is meant for SFF systems, thanks to the low-profile heat sink from Silverstone. ECS and Silverstone have tied up to offer consumers a one-stop shop for those attempting to build a system based on the H110SU-02 mSTX board. The gallery below shows some shots of the motherboard with a low profile heatsink installed.

The full details of the board are provided in the table below. Pricing is not available yet.

On the whole, the consumer products from ECS on display at CES point to where the desktop computing market is headed. The market share for small form factor systems is increasing even as the overall desktop PC market declines. SFF systems are also turning out to be an attractive proposition in the business PC market.