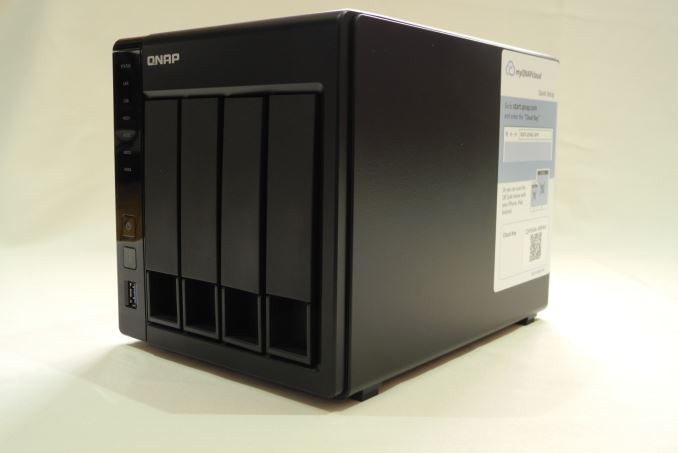 QNAP is one of the leading vendors in the COTS NAS (commercial off-the-shelf network attached storage) space. They have a wide variety of hardware platforms to choose from, ranging from ARM-based single-bay systems to Xeon-based rackmounts. Earlier this week, they launched the Bay Trail-based TS-x51+ series for home and SOHO users.

Despite Intel having launched the Braswell platform for storage applications, QNAP has opted to remain with Bay Trail for the TS-x51+ series. A look at the specifications reveals that the core SoC and memory capacity seem to be similar to the TS-x53 Pro launched last year. However, while the TS-x53 Pro targets the mid-end SMB market, the focus of the TS-x51 is more towards the home consumer side. The differences between the TS-453 Pro and the TS-451+ are listed below:

The various specifications of the NAS are backed up by the data gleaned via SSH access to the unit. 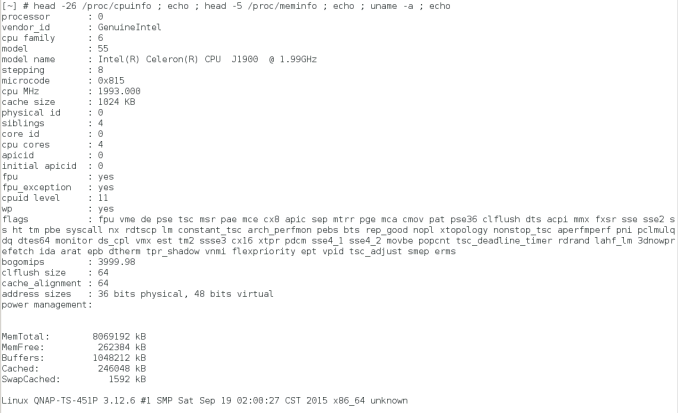 Having reviewed QNAP's SMB-targeted NAS units for the last couple of years, I was a bit put off by the industrial design of the unit. The drive caddies of the TS-451+ are plastic and flimsy. Despite the home consumer / SOHO focus, I would prefer that the caddies be the same as the ones used in the Pro series at this price point. Otherwise, the local control / LCD display panel is not going to be missed much (I rarely used that feature even in the Pro series). An in-built PSU would be good, but most SOHO NAS units come with power bricks and it is something difficult to get rid of in the units targeting this price point / market segment.

Our review unit initially shipped with QTS 4.1.4, but we upgraded to QTS 4.2 for our evaluation. The setup process itself is quite straightforward. Upon connection to the network, the QNAP TS-451+ receives a DHCP address even in a diskless state. The IP address can be determined either from the DHCP provider in the system or via the Qfinder utility. Accessing the IP address with the default admin/admin login credentials got us going with the setup process. We started off with one disk in the unit, and it was configured as a JBOD volume. Disks were added one by one, migrating in the process from JBOD to RAID-1 and on to RAID-5. The QTS OS handled the RAID migration and expansion without any issues. A detailed discussion of QTS 4.2 and the QNAP mobile apps will be done in an upcoming review.

In the rest of the review, we will take a look at the benchmark numbers for both single and multi-client scenarios across a number of different client platforms as well as access protocols. We also have a separate section devoted to the performance of the NAS with encrypted shared folders. Prior to all that, we will take a look at our testbed setup and testing methodology.

The QNAP TS-451+ can take up to 4 drives. Users can opt for either JBOD, RAID 0, RAID 1, RAID 5, RAID 6 or RAID 10 configurations. We expect typical usage to be with a single RAID-5 volume. To keep things consistent across different NAS units, we benchmarked a RAID-5 volume. Four Western Digital WD4000FYYZ RE drives were used as the test disks. Our testbed configuration is outlined below.

The above testbed can run up to 25 Windows 7 or CentOS VMs simultaneously, each with a dedicated 1 Gbps network interface. This simulates a real-life workload of up to 25 clients for the NAS being evaluated. All the VMs connect to the network switch to which the NAS is also connected (with link aggregation, as applicable). The VMs generate the NAS traffic for performance evaluation. However, keeping in mind the nature of this unit, we restricted ourselves to a maximum of 10 simultaneous clients. A detailed explanation of our solution-based benchmarking approach is available here.