A few months ago, we reviewed the Razer Blade 14” (2015) which we found to be a great laptop for those that wanted something thin and light but could still be used as a gaming PC. However, one of the big questions that was left unanswered with that review was whether the 1080p version of the laptop would have advantages in battery life, and whether the display was of the same quality as the QHD+ variant outside of differences in resolution. So to answer the question we reached out to Razer, who sent over the 1080p version of the Blade with Windows 10 for further evaluation.

While advantages in battery life could be interesting, the most important part to look at first is the display itself. In order to test this, we use SpectraCal’s CalMAN 5 with a custom workflow, along with X-Rite’s i1Pro2 spectrophotometer and i1DisplayPro colorimeter. 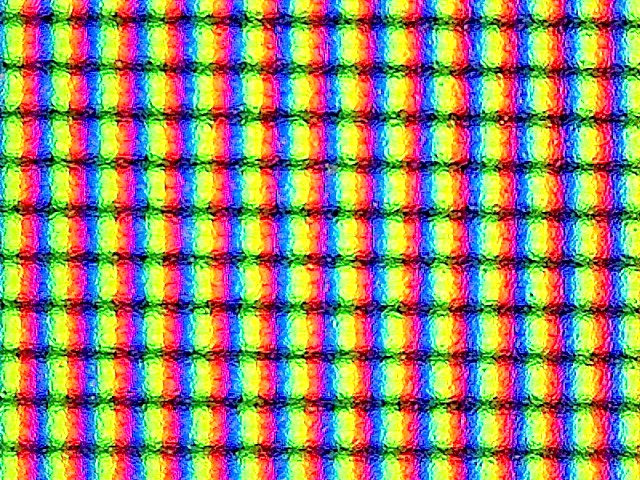 In the case of the Razer Blade 14” 1080p, it seems that Razer has elected to fit this variant with LG’s LP140WF3-SPD1 IPS display. Unlike the Sharp QHD+ panel, this LG IPS display uses traditional a-Si (amorphous silicon) to create the thin film transistors that control the liquid crystals in the display. This means that electron mobility is relatively low compared to IGZO, which means power efficiency on a per-transistor basis will be lower.

Unlike the QHD+ panel, this 1080p also has a matte display. For those that are unfamiliar with the difference that this creates, matte displays attempt to reduce specular reflections which create the mirror effect that glossy displays can have. However, the price of this generally reduced clarity and ultimately since matte coatings don’t do any sort of interference to eliminate reflections diffuse reflections are still present which can wash out the display. 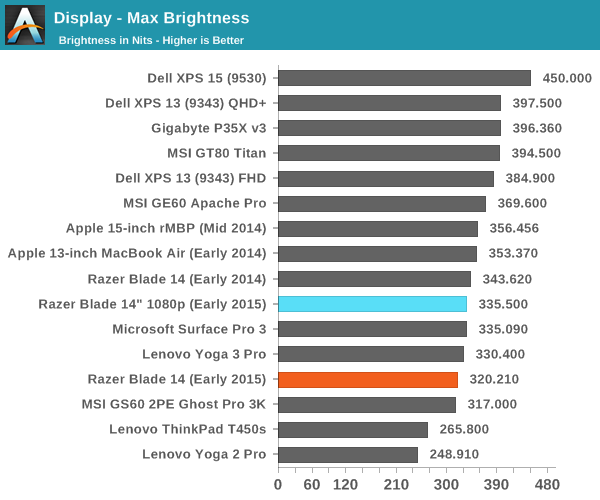 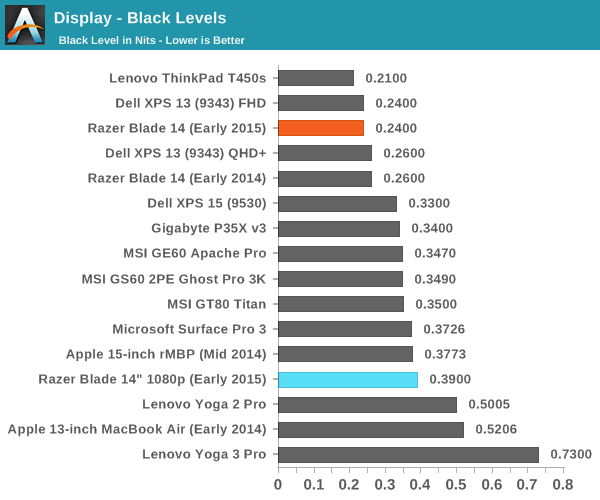 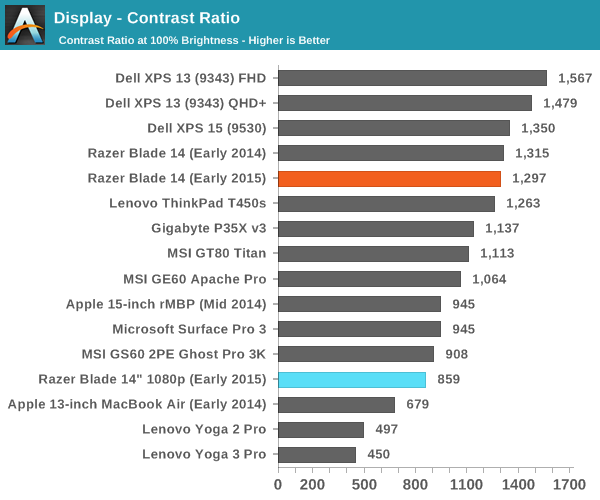 If we look at some of the basic tests of brightness and contrast, the panel is roughly equivalent to the QHD+ variant of the Razer Blade, but black levels are higher which makes contrast lower. This is likely due to the lower Ion/Ioff ratio of a-Si compared to IGZO TFTs. It’s worth noting here that minimum brightness on the Blade 1080p is below 20 nits relative to the 80-90 nits that the QHD+ gets, so night time use should feel less like staring into the face of the sun. 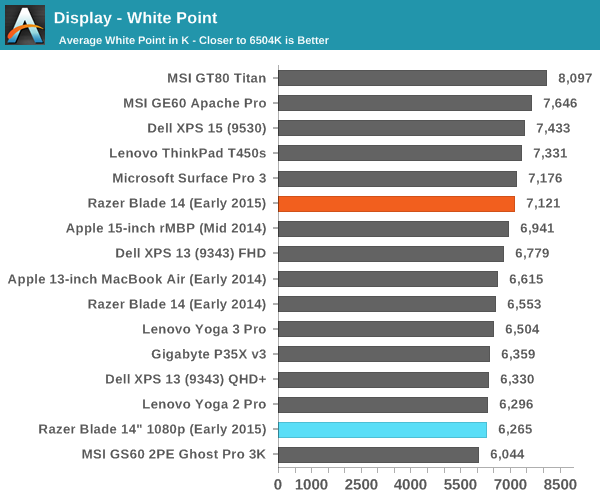 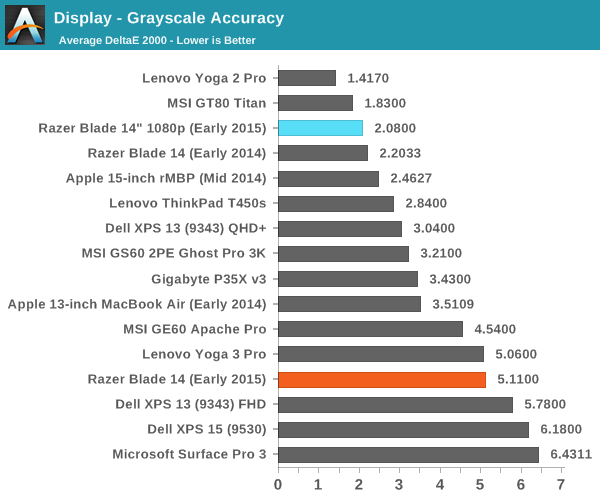 Out of the box for grayscale, it’s clear that Razer is taking calibration at least somewhat seriously judging by the presence of their own color profile for the display in the color management settings. This is set by default, and with it grayscale calibration is already quite acceptable for work that needs color accuracy. The display does end up a bit warm but the difference from neutral shouldn’t be too noticeable. 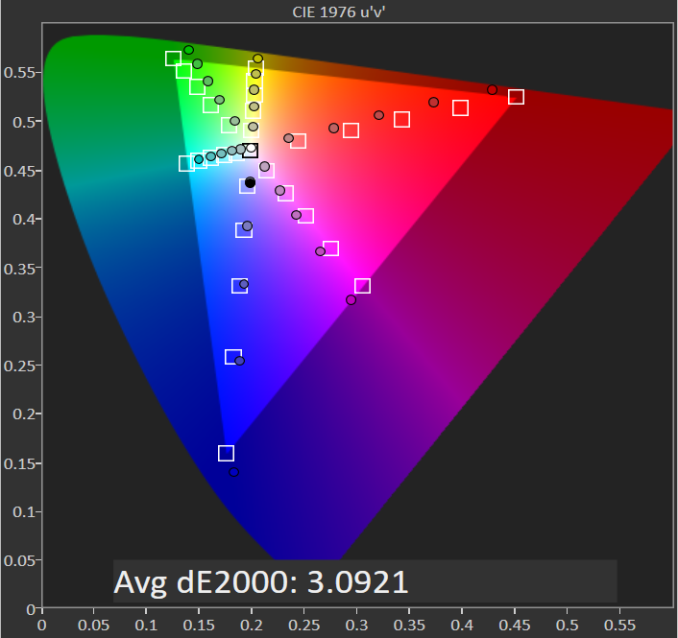 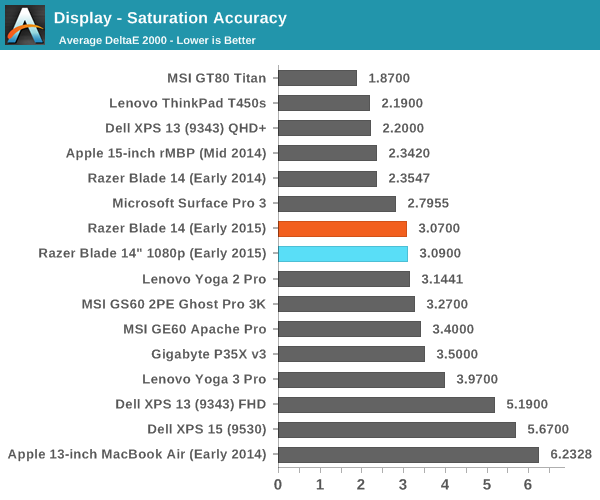 Moving on to the saturation sweep, it’s apparent that the gamut of the display isn’t quite right at roughly 90% sRGB, and as a result colors won’t be 100% accurate. The deviations aren’t enormous, but they’re there for green and red and will affect color-critical work. It’s likely that this should help with power efficiency for what it’s worth. 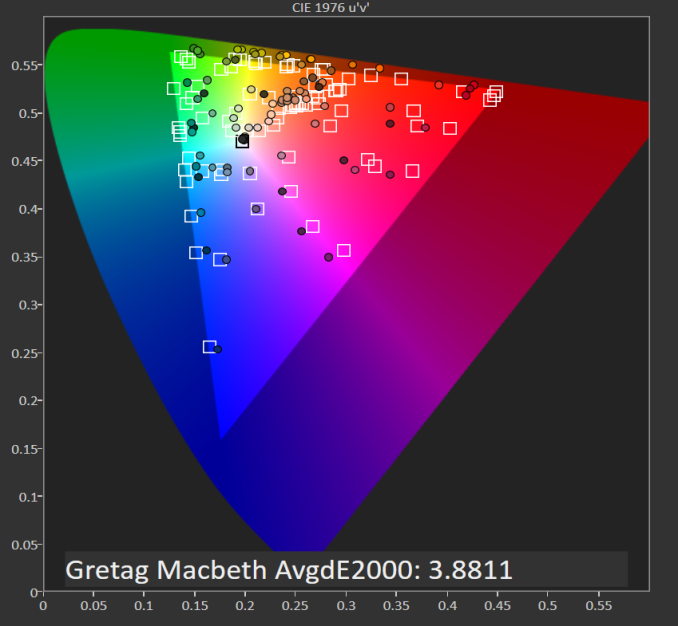 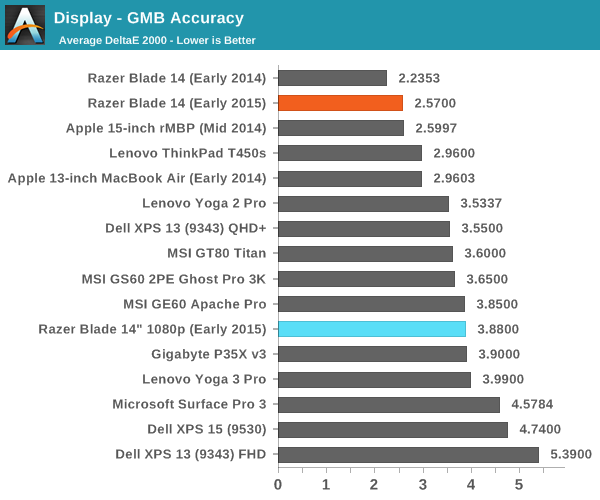 In the GMB ColorChecker, overall accuracy ends up behind the QHD+ variant due to the difference in gamut. It isn’t much, but it’s worth noting.

In order to test calibrated accuracy, we calibrate the display using our custom workflow and the i1Pro2 before running the same tests again, with all calibration done at 200 nits. 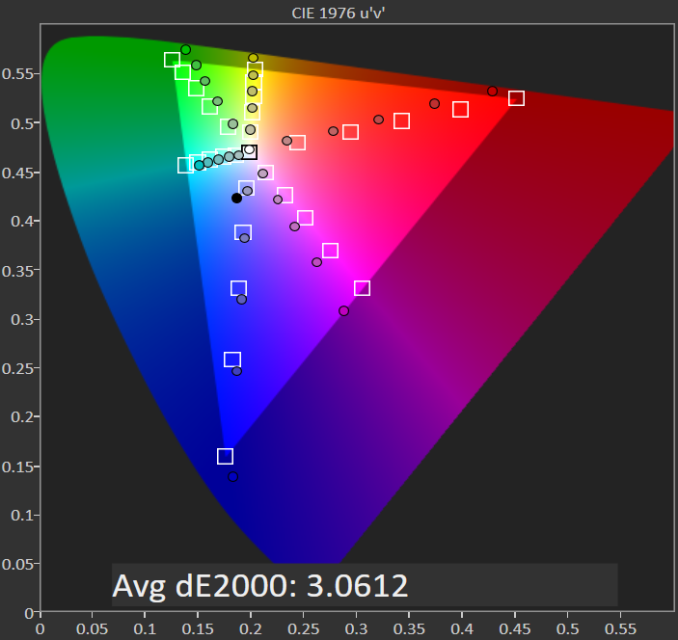 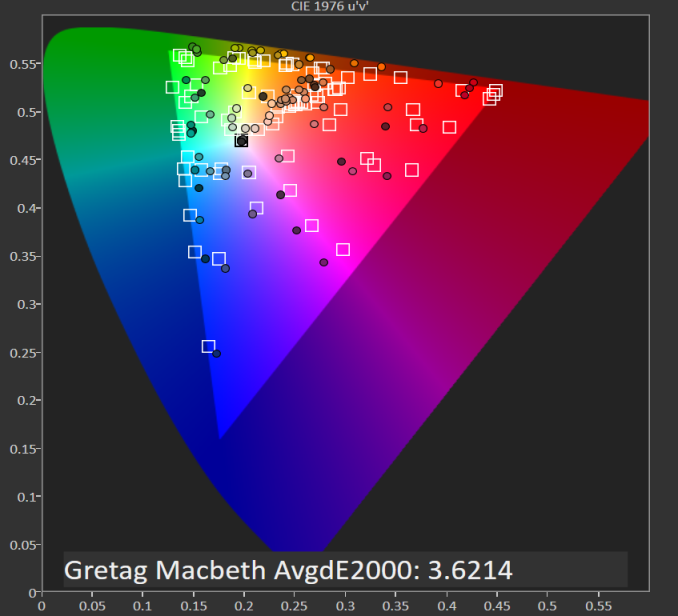 Overall, the display does see some improvement in grayscale but because the display has a gamut problem there’s basically not much that can be done here to improve color accuracy. Accuracy is good enough for just about anyone that will use this laptop, but people that are looking for a display that is almost perfectly covering sRGB should look towards the QHD+ variant.

The next area of interest in this variant of the Razer Blade is definitely battery life. As pretty much everything else can be held constant, the main difference between the 1080p and QHD+ variants this time around can be solely attributed to the display in these tests, as something like RAM isn’t going to have an enormous effect on battery life. In order to test this, we run our standard battery life tests in which the display of the laptop is set to 200 nits brightness, with Power Saver mode enabled with some standardization of advanced power settings within the mode. We then run a loop of certain workloads timing the device from when it’s first unplugged until the laptop dies. 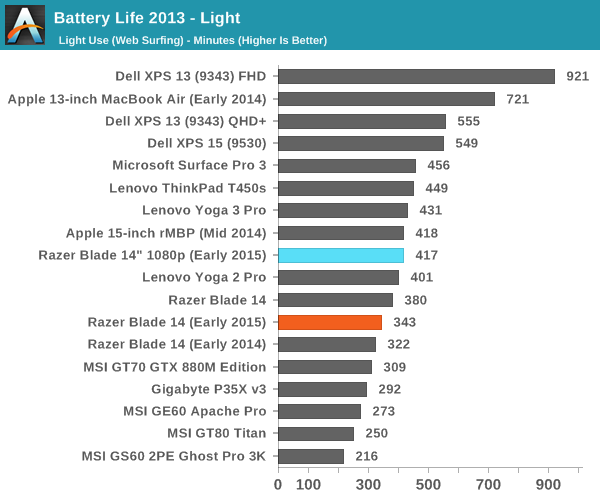 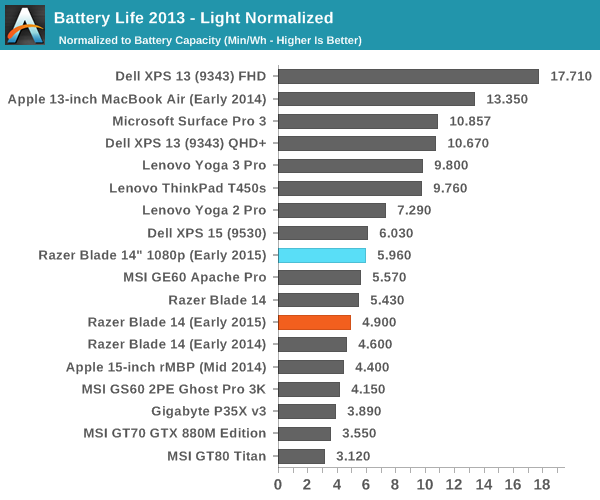 Our first test, which is simply light web browsing, we can immediately see the trade-off that results from the higher resolution of the QHD+ display despite the use of more power-efficient IGZO TFTs. The 1080p Razer Blade gets roughly 22% better battery life in this scenario which is all in the form of higher power efficiency. The 1080p Blade averages roughly 10W throughout this test assuming nominal battery capacity, while the QHD+ Blade averages roughly 12W in this test. Given that this is basically all simple 2D GPU work, I suspect most of the delta here is from display power rather than the GPU increasing clock speed to keep up with the higher resolution. 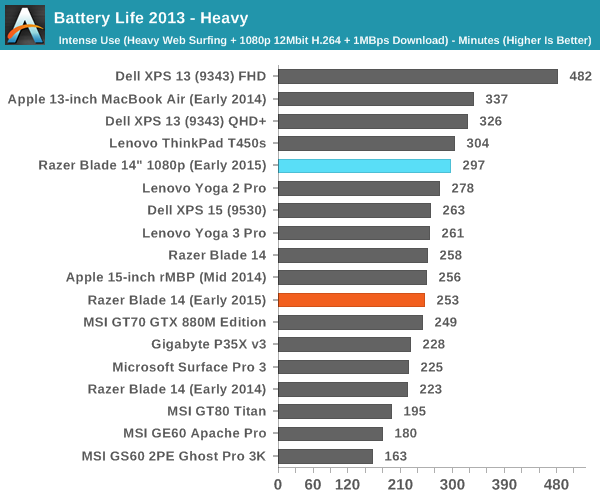 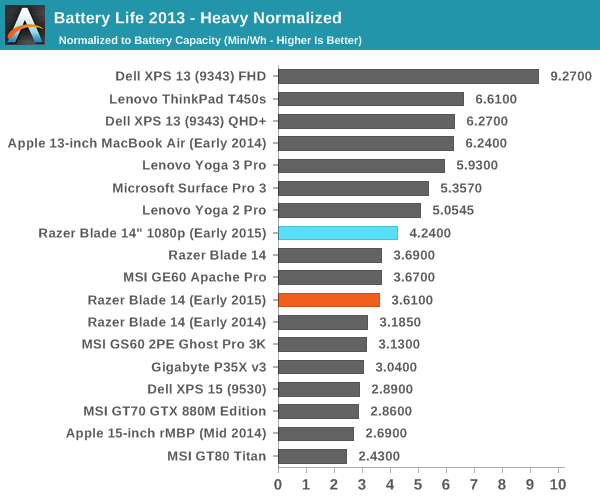 In the heavy test, we can see that the same result plays out, but the gap between the two systems shrinks slightly to 17% instead of 22%, which is because the rest of the system becomes much more dominant in regards to battery life. Here, the Blade 1080p is using about 14W average throughout the test while the Blade QHD+ is using roughly 16.5W. Given that the difference is effectively constant, it’s probably a pretty safe bet that the delta in display power is mostly intrinsic to the display itself.

Overall, for those that are still wondering whether the 1080p or QHD+ Blade is the right way to go here, it’s a tough call. The QHD+ Blade unquestionably has the better display, as someone that has spent over a year using the Blade 14” (2014) as their primary PC. However, the 1080p Blade’s display is still quite good, with decent color accuracy and resolution.

In terms of tradeoffs between the two, on a personal level the matte display is annoying to me because I strongly prioritize display clarity. On the other hand, the 1080p Blade has significantly more battery life, on the order of a 2W reduction at the same brightness level. This may not make a difference when you’re dissipating an average of 80W+ in a gaming scenario, but in any light use scenario like simple web browsing battery life will definitely be a noticeable jump up. The 1080p Blade is also cheaper, but with 8GB of RAM running VMs and other RAM-hungry applications like Chrome will necessitate avoiding excessive multitasking to avoid commit charges well north of 8GB.

Regardless, if battery life is critical I would go with the 1080p variant. On the other hand if you value multitasking or display quality more strongly than extra hour or so the 1080p version will get you, I would still go with the QHD+ variant.