For users that are used to consumer grade motherboards, the BIOS design is basic at best which is unfortunate given Lenovo's prowess in chassis design. Rather than follow the route for a graphical interface, because these workstations are designed to be for software use rather than self-build configurables, we get a black on grey implementation showing basic lists of features.

It is also worth noting that Lenovo’s BIOS does not have a ‘save screenshot’ feature like many other modern UEFI setups. As a result, I apologize for the series of photographs. 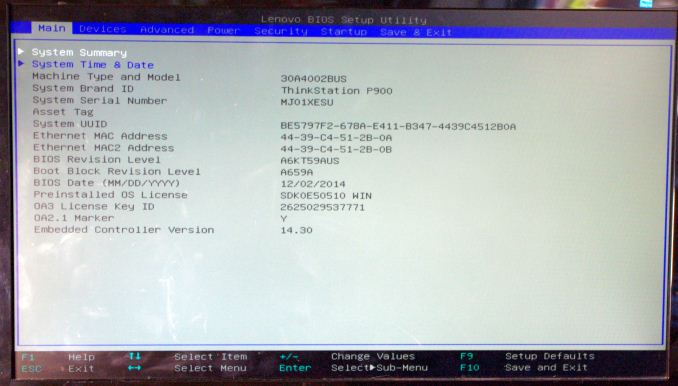 The main screen of the BIOS gives us the brand name (ThinkStation P900), MAC addresses and a BIOS date, but in order to get meatier info on the system, pressing Enter on the ‘System Summary’ option tells us more of what is under the hood: 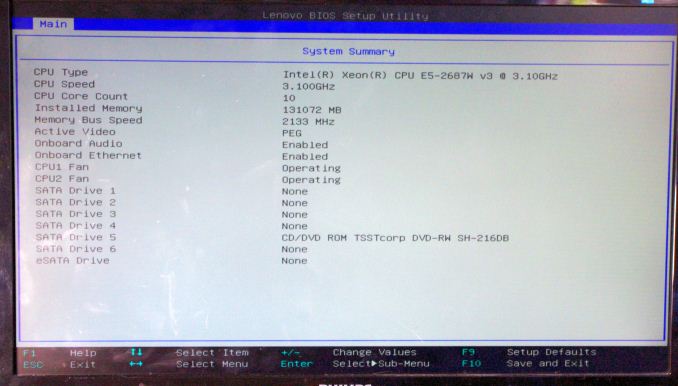 The E5-2687W CPU is found, although only one is mentioned here rather than the two installed. Total DRAM at 128GB running at 2133 MHz is also indicated, with the fans and audio/Ethernet. What is interesting is that due to the FLEX Module being PCIe based, we don’t see the XP941 drive shown here.

The Devices tab at the top gives a direct link to many of the controller and PCH based options: 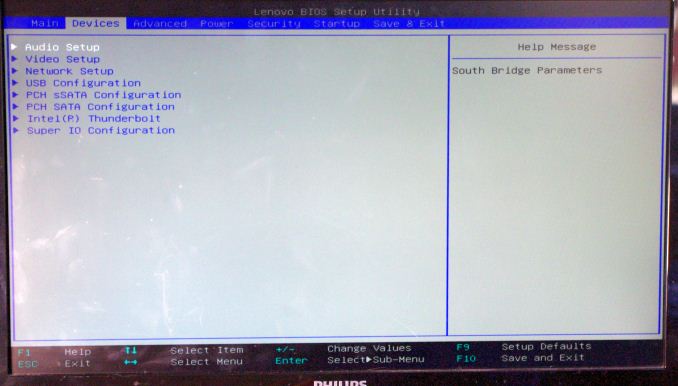 Most of these are enable/disable, and the Thunderbolt menu requiring a Thunderbolt card to be installed. The Haswell-E chipsets technically have two SATA controllers, one that can hold six and is RAID 0/1/5/10 capable (‘SATA’) and another that holds four but is not RAID capable (‘sSATA’). Users can select between IDE, AHCI in these sub-menus and RAID also in the ‘PCH SATA’ option – it is worth noting that Lenovo only uses four from the SATA controller in the PCH. 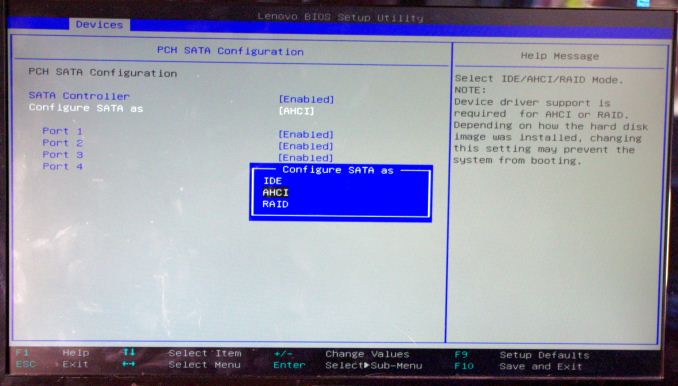 The Advanced top tab focuses more on the intricate options of the system, most of which will mean nothing to most users. 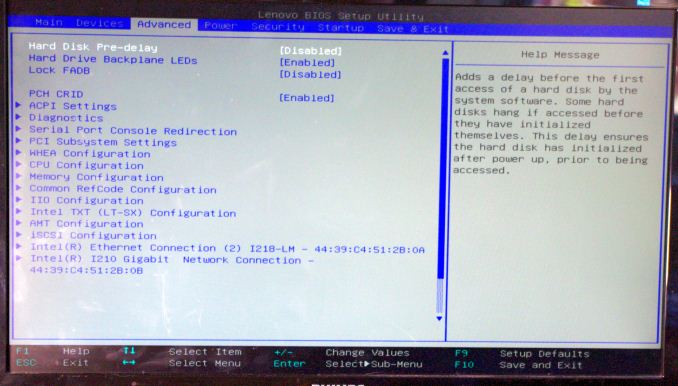 The most important options, in order, are as follows.

Above 4G Decoding, for Xeon Phi type co-processors, is by default disabled and found in the PCI Subsystem settings: 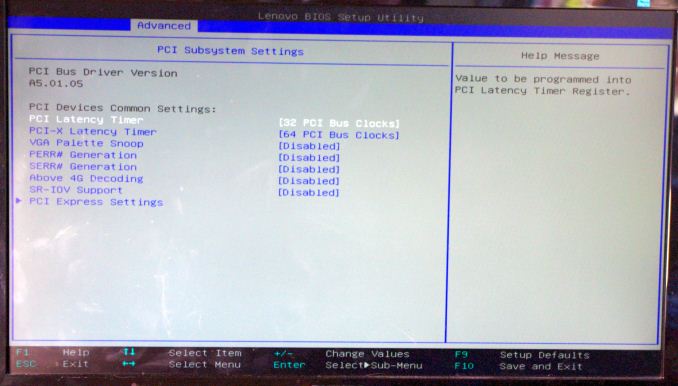 The CPU Configuration menu gives more details on the processors in each socket: 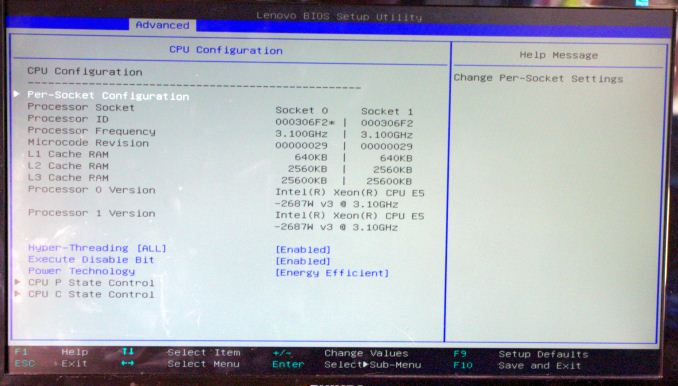 Here we can enable/disable HyperThreading, as well as look into the power and control states of the system in order to adjust efficiency. 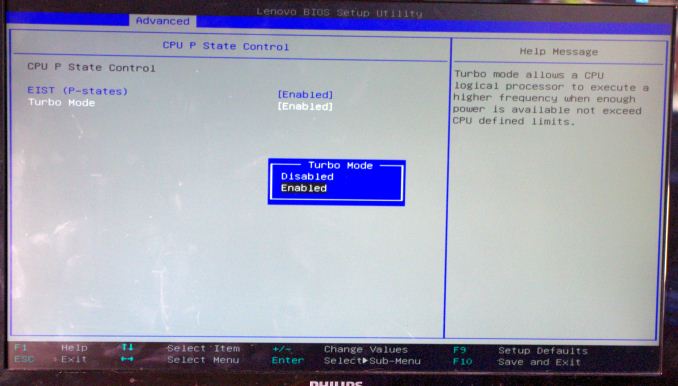 The Memory Configuration option allows the administrator to select ECC support, the memory frequency, the memory type as well as subtimings. Normally in this sort of BIOS we do not get this level of memory detail, however the administrator will have to know exactly what is under the hood to make sense of the options. 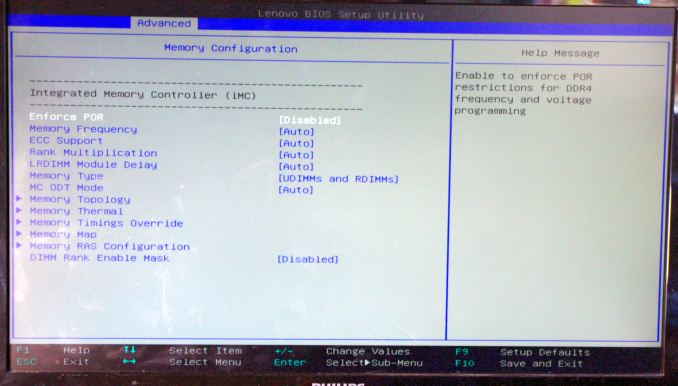 For example, in the memory sub-timings override menu, all the values are set to 0 rather than showing what the training/pre-testing did on POST: 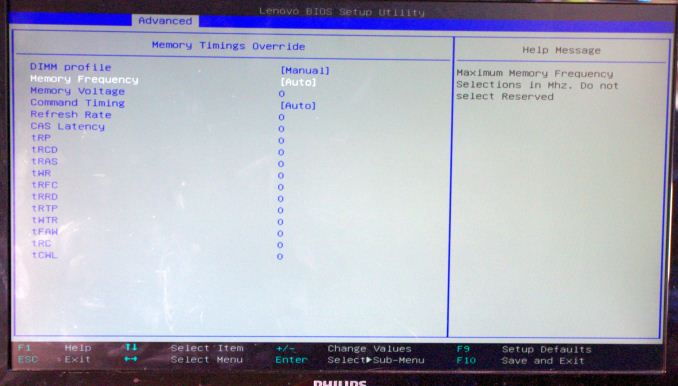 One wrong setting could cause the system not to boot, requiring a BIOS reset. Lenovo’s BIOS team might benefit from looking at how this is done on more commercial products in order to develop this section of the BIOS. 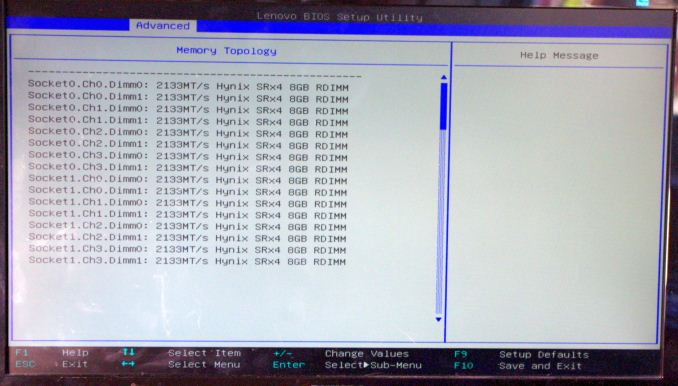 The Memory Topology option is helpful in case the user notices the total memory of the system decrease. If one module is not working as it should, this screen should show it. 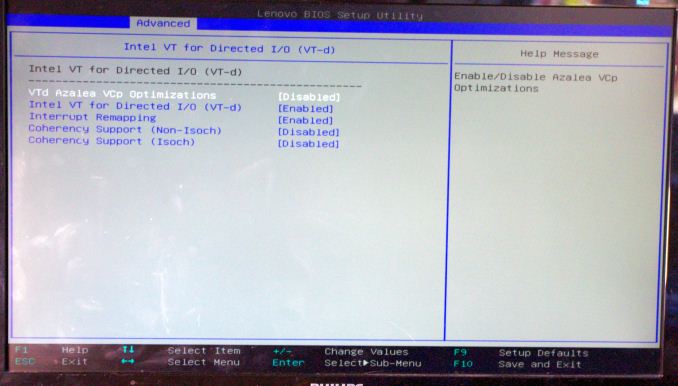 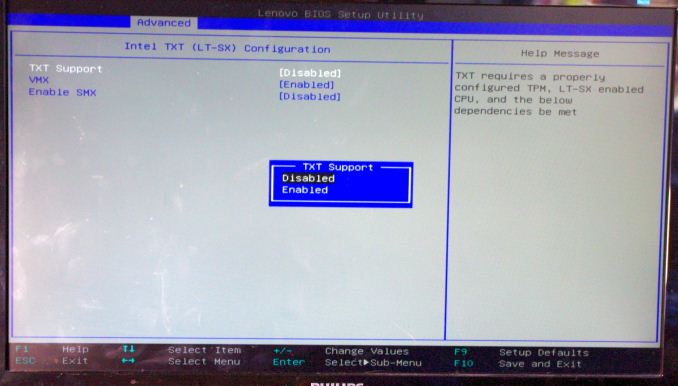 Our system came equipped with an Intel I218-LM and Intel I210 network interfaces which get their own screens in the BIOS. The I218-LM is designed for vPro capable products, whereas the I210 is a more general interface that allows virtual MAC addresses: 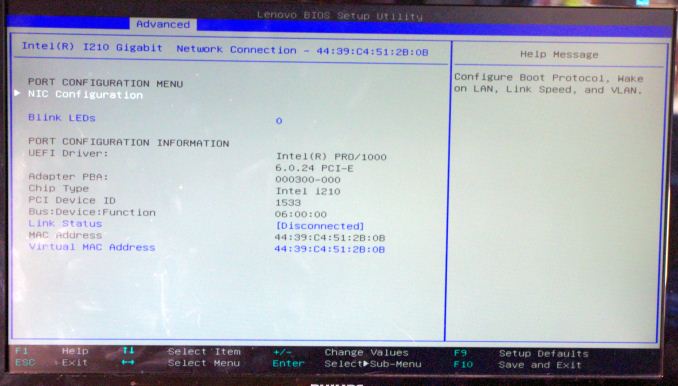 Security features include support for TCG, hard disk passwords, a fingerprint sensor (if one is installed) as well as a system event log. 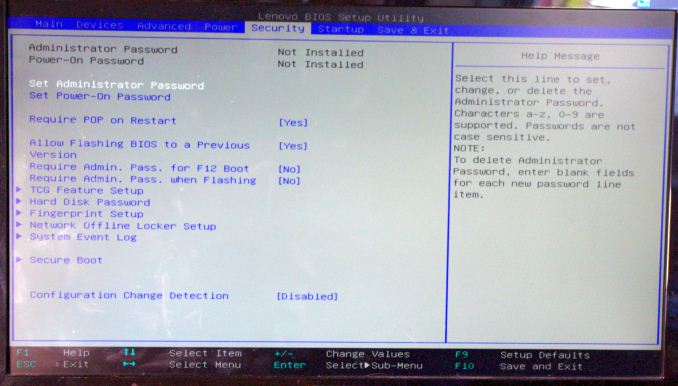 The Hard Disk Password screen also provides an option for ‘Security Erase HDD Data’, which is presumably passing the Secure Erase function over the IDE protocol. 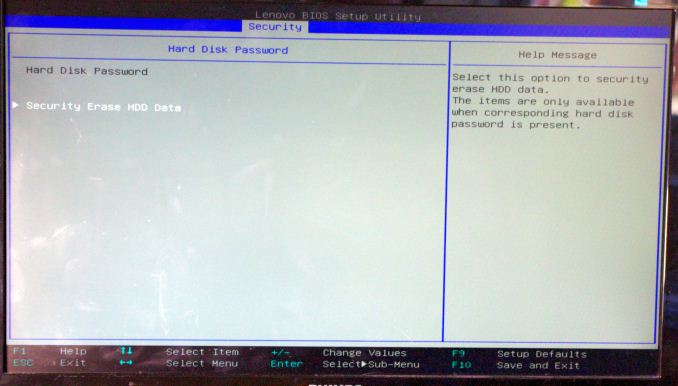 Users who want to use the P900 as an IO-less machine will have to navigate to the Startup tab and adjust the ‘Keyboardless Operation’ option to let the system boot without a keyboard attached. 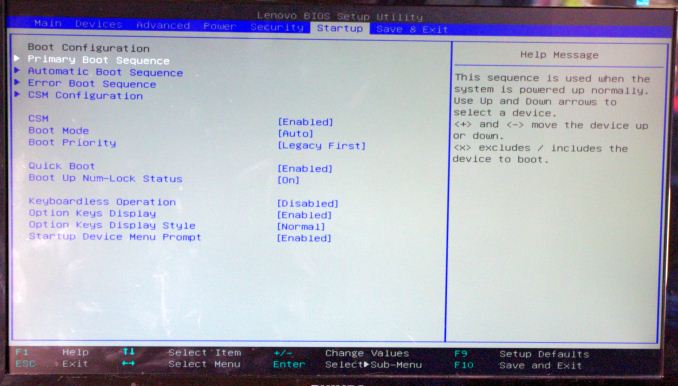 Aside from this is the regular Save and Exit features. Unfortunately Lenovo doesn’t include a Quick Boot option, allowing for a one-time boot from a different device. This option is usually useful for users playing around with LiveUSB installs.

Though reviewing different types of systems and components, the software packages from manufacturers broadly fall into three categories. On the low-end we have the zero-software implementations, usually found on server motherboards or third-tier manufacturers. At the high-end is a plethora of testing options and settings that allow for the system to be configured and manipulated, as well as additional tools that some users will find useful. In the middle is where we found the ThinkStation P300, and in a similar situation the P900 is as well. It comes with a couple of useful tools for administrators, but nothing mind-blowing. Nevertheless, users rarely buy this level of system for the software – professional packages could easily cost twice as much as this system for a single license. 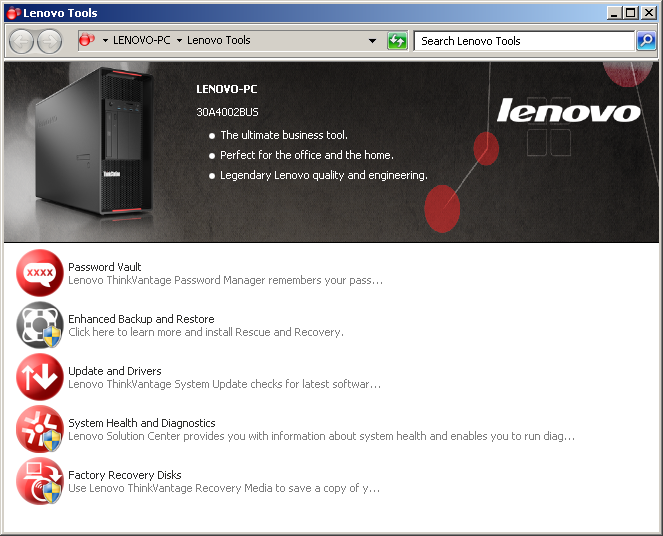 The main frontage is the Lenovo Tools suite, giving access to the Password Vault, Backup and Restore, an update system as well as diagnostics and recovery packages. 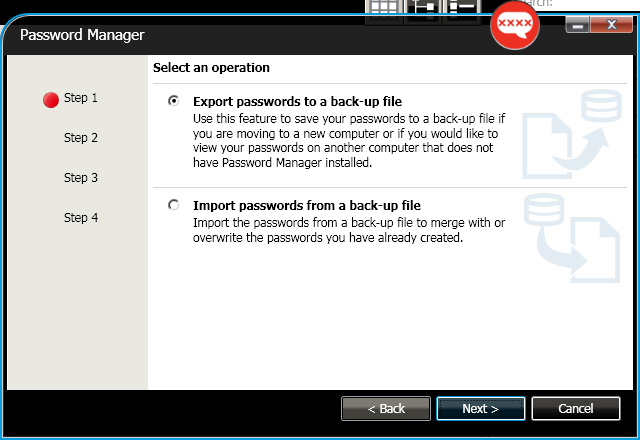 The Password Vault (or manager) allows users to create a username and password list for their browsers which are auto entered but not held by the browser itself. 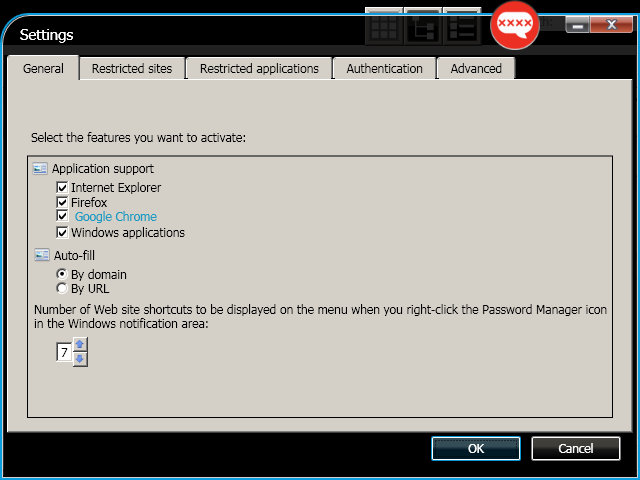 There was no indication that the passwords were encrypted by the software but one would assume so given the nature of what the software holds. 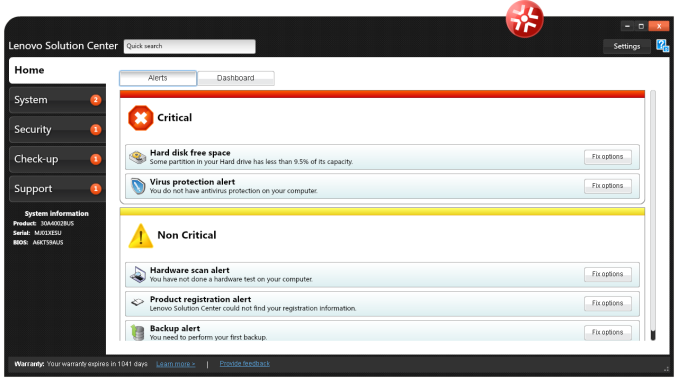 Lenovo’s Solution Center, which we saw back on the P300, is a rather nice tool that shows the user when something needs critical attention. In this case, as shown above, the main drive has less than 10% capacity and there is no virus protection installed. (The first issue is my fault; I split the drive into two partitions for benchmarking.) We also get non-critical alerts, such as registration and regular scanning. 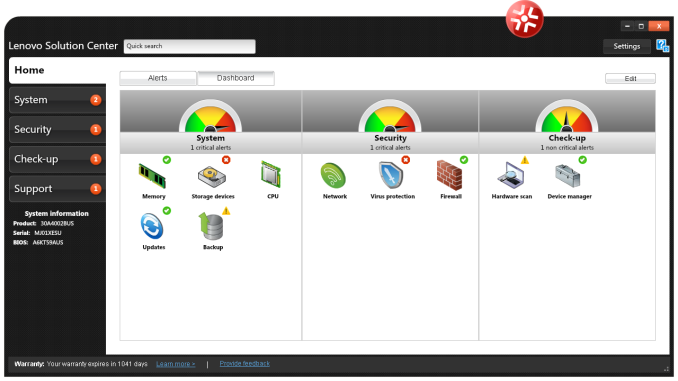 Alternatively the dashboard shows the issues from a separate system/security/checkup standpoint. 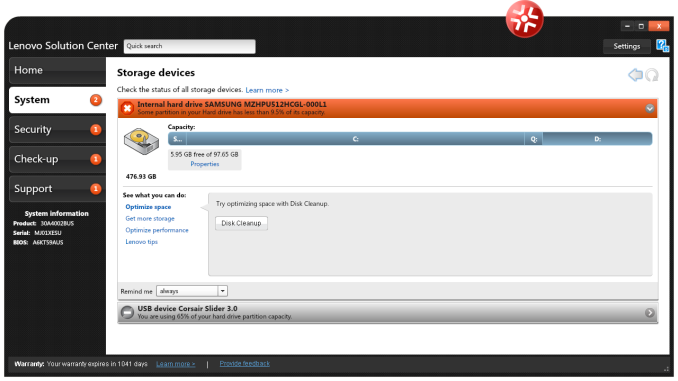 Individual elements of the solution center will show the issues at hand, as well as potential solutions. For example, here we get Disk Cleanup as an option, or a link to order more storage. 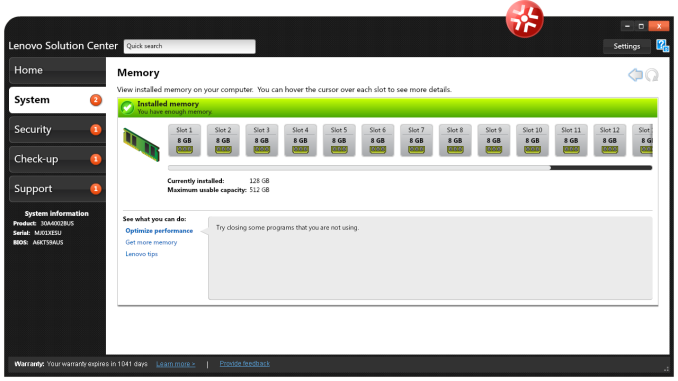 Whereas with the DRAM section we are told we have ‘enough installed memory’, and the tip is to ‘try closing programs’ to optimize performance. 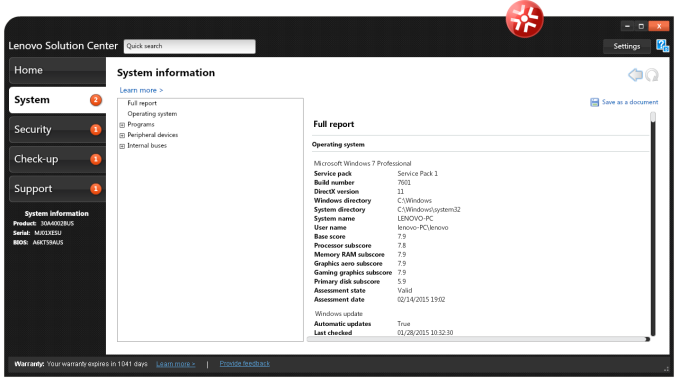 The system also gives a full information report which can be saved and uploaded as part of a debugging procedure should the need arise. 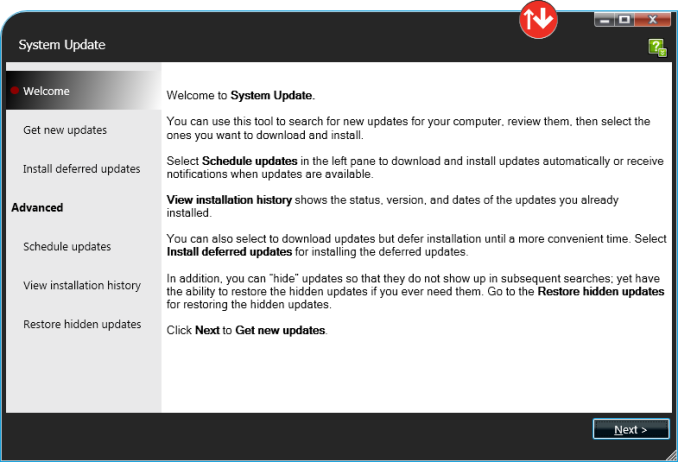 The System Update tool is also identical to the one we saw in the P300, whereby the tool synchronizes with Lenovo’s server and checks for updated versions compared to those on the system. These updates are for both software and drivers. 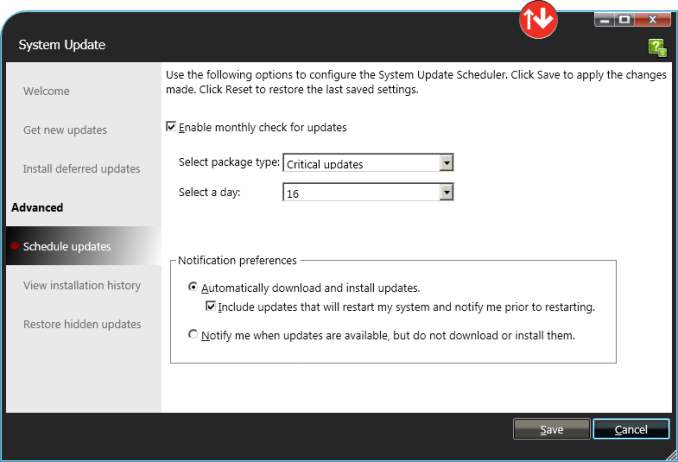 As before, an update schedule can also be selected. 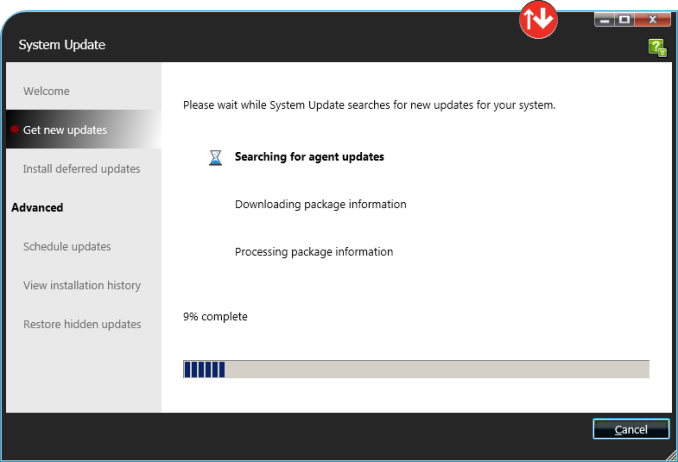 Lenovo also includes two storage based programs – one on cloud storage and one for sharing files over a network. 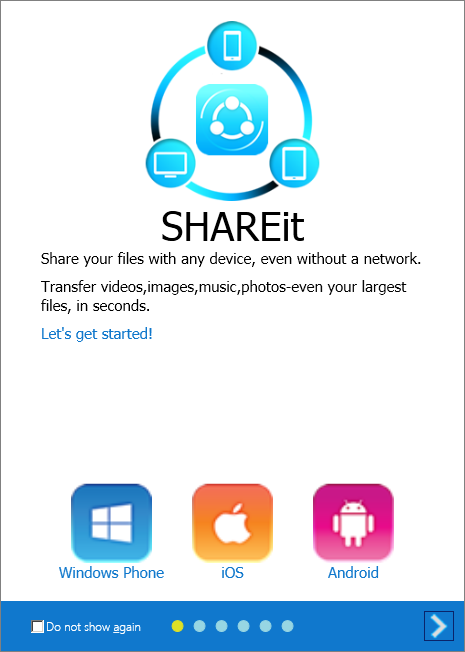 ShareIt acts as a WiFi peer-to-peer arrangement when a DHCP server isn’t available. 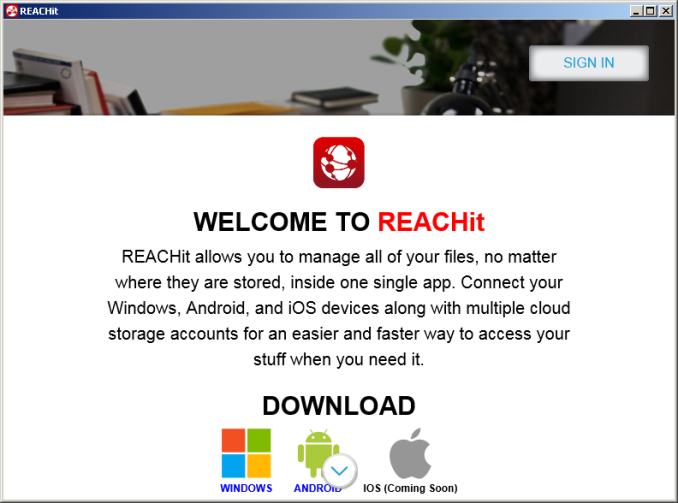 ReachIt combines multiple cloud storage accounts into one single interface, allowing users to search through them all from any device to obtain their files.