By now, it generally goes without saying that a high end smartphone needs to have an amazing display. However, defining what an amazing display is can often be quite difficult. We can all agree that a display should get as bright as possible and that black pixels should be as dark as possible, but some characteristics are often subject to personal biases. Something as simple as white point can divisive because some people prefer warmer colors, but others prefer a colder color balance. Color in general can be a subjective preference, as some prefer wide color gamuts and saturation compression to achieve a vivid look, but others prefer more muted and subtle colors.

However, despite subjective preference we have to all have a common standard for color rendition. After all, if pink on one screen looks like magenta on another, this could easily result in a number of problems when sharing content. Something as simple as taking a photo can be difficult with an inaccurate display, as white balance on a photo could easily appear to be incorrect for a scene even if it isn’t. As a result, in addition to judging simple characteristics such as brightness and contrast, we also test how well a display matches against the sRGB color standard with a gamma target of 2.2. In order to do this, we use our usual test suite which includes X-Rite’s i1Pro2 for accurate color and brightness measurements, along with X-Rite’s i1Display Pro for accurate contrast measurements. In order to fully utilize this hardware, we use SpectraCal’s CalMAN 5 Ultimate with a custom workflow for mobile devices. 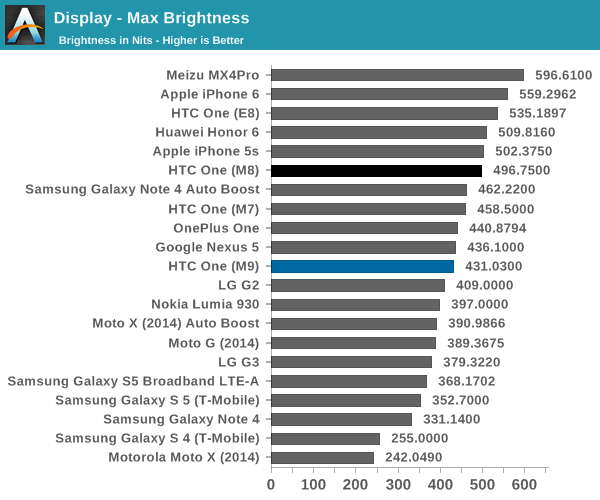 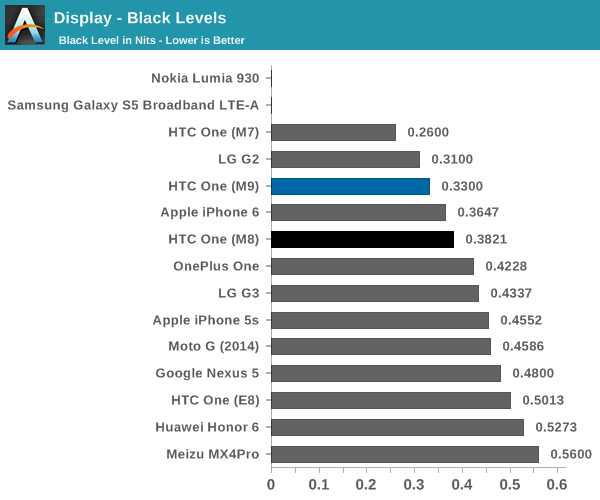 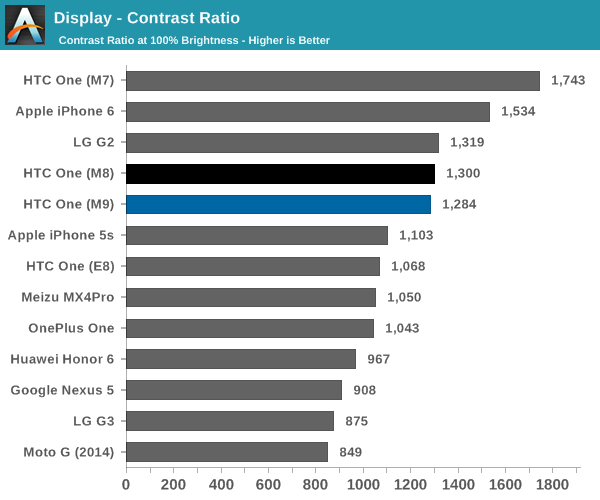 Our first test is focused on some of the basic aspects of the display, namely brightness and contrast. In this regard, the M9 seems to effectively identical to the M8. Both have some level of content-adaptive backlight control, which means that static contrast is lower than the value that we’ve tested it for. 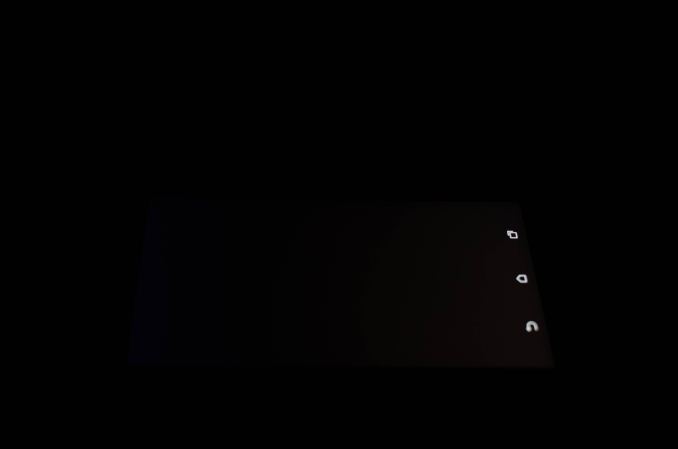 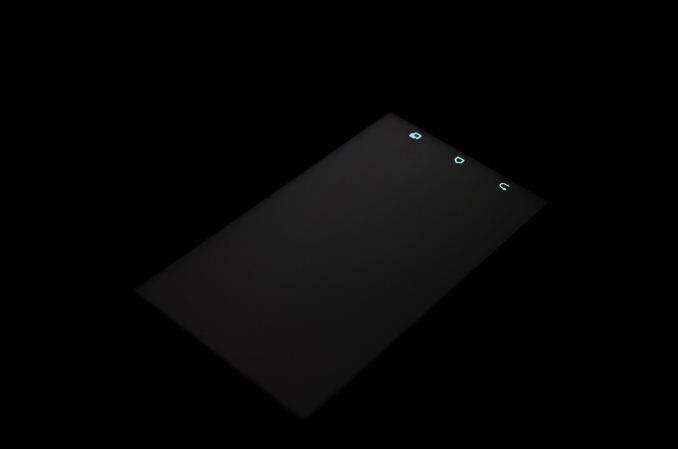 Outside of this basic test, I noticed that the display has worse viewing angles than the M7 and M8. Although the off-angle glow isn’t visibly different when shifting the display along the horizontal and vertical axes, anything in between dramatically decreases contrast as seen in the photos below. It’s likely that this is related to the polarizers used, as the IPS glow effect is strongly angle-dependent. In practice, this really does reduce the effective contrast of the display. The brightness of the display could be higher, but it’s likely that at this point it makes more sense to target lower reflectance with improved coatings rather than driving brightness. 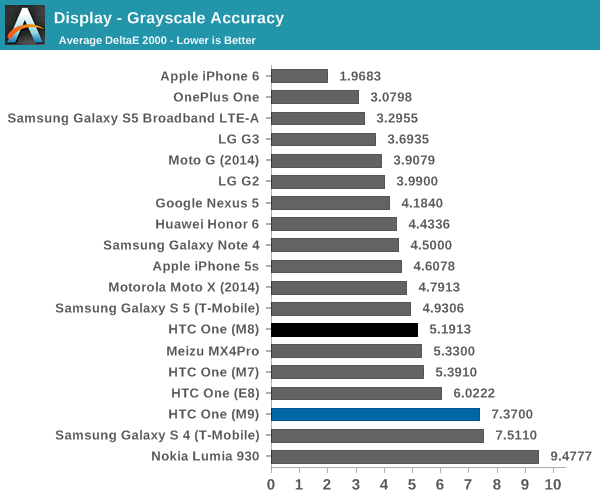 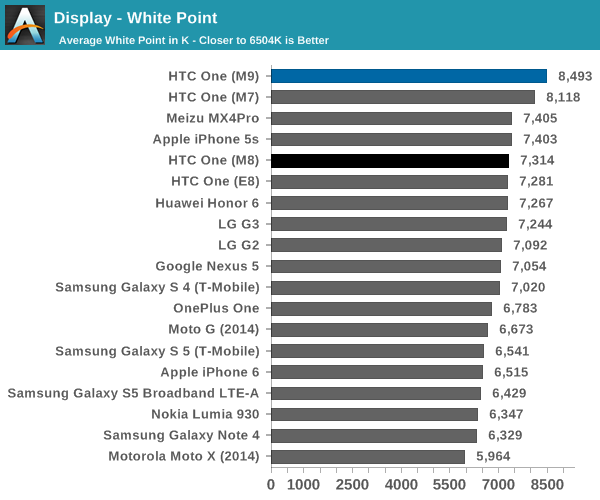 Moving on to grayscale calibration, we can see a dramatic reduction in accuracy when compared to the M7 and M8. Although gamma is generally correct, the white balance ends up far too green and blue. The next most notable issue seems to be related to CABC, as there’s a dramatic increase to gamma from 70% to 100% white. In practice, everything looks excessively cold and with a strange green tint to a lot of content, which really hurts the viewing experience. In order to get an idea for whether this is just a single point or a general trend, we can look at the saturation test which introduces multiple colors. 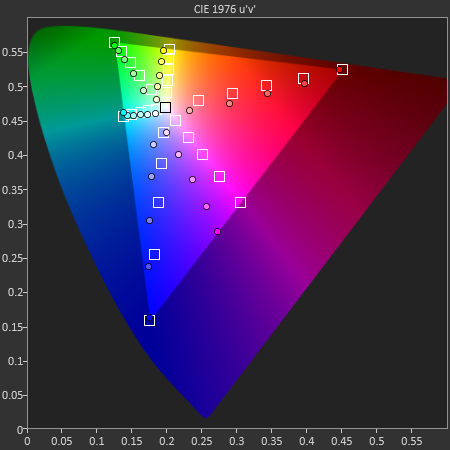 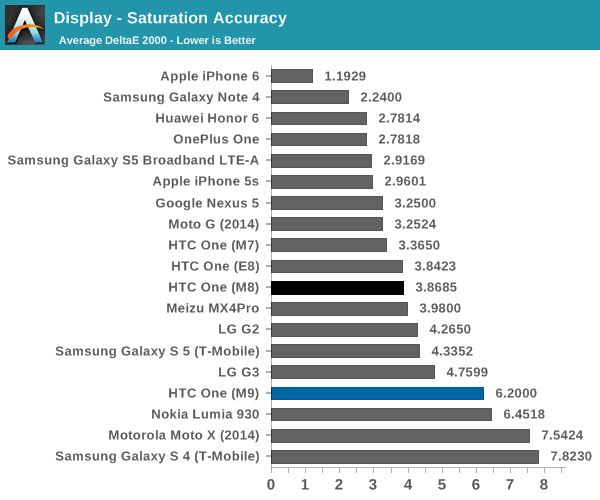 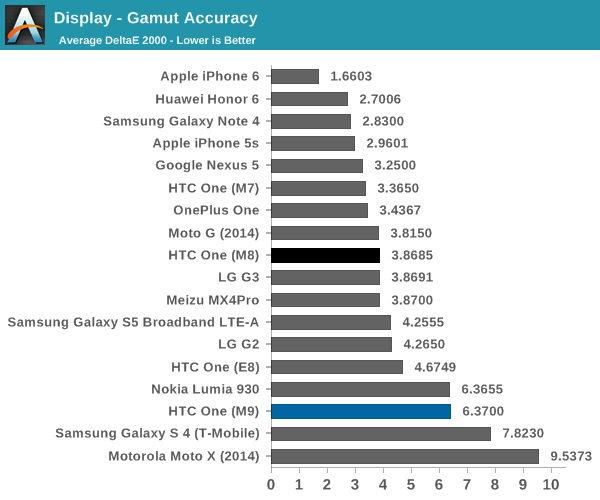 As we can see, in the saturation test this excess of green and blue in colors is not an isolated case of white balance. Colors like magenta are significantly skewed towards blue, yellow tends to skew towards green, and colors like blue and green have noticeable saturation compression. As a result, the color accuracy will be noticeably different from a monitor that follows the sRGB standard. The only positive aspect of this color calibration is that HTC has managed to constrain the gamut of the display to sRGB, unlike the M8 which noticeably exceeded sRGB. 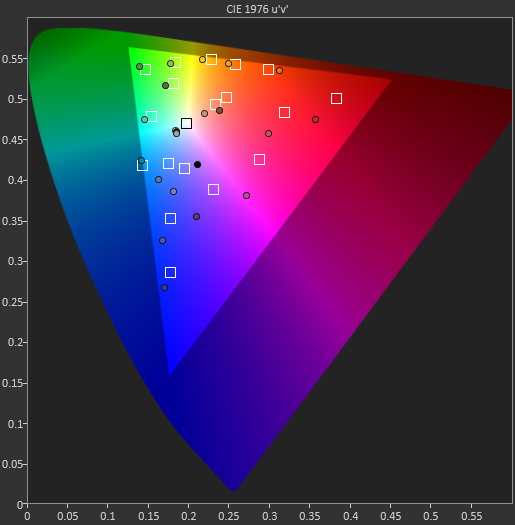 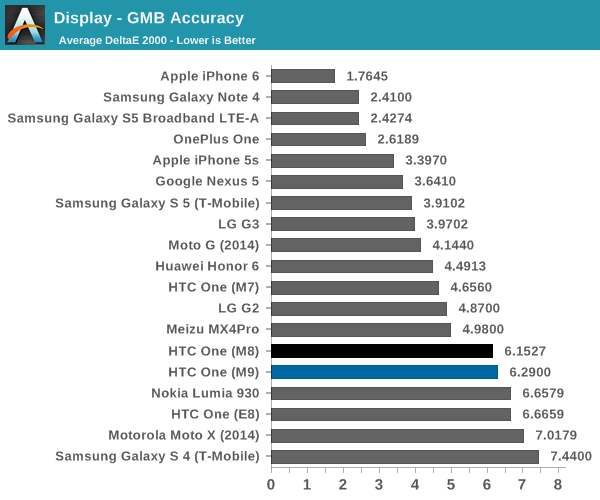 In the Gretag MacBeth ColorChecker, we can get a holistic view of color accuracy within the sRGB space which tests hue, saturation, and gamma to see display calibration as a whole. Somewhat predictably, the M9 also falls short in this scenario. Given how significant the deviations are, it would be difficult to use the M9 in any case where color accuracy is needed.

Overall, the display of the M9 is disappointing. At some point, it was clear that HTC was integrating some of the best mobile displays possible into smartphones, but starting with the M8 it seems that we’ve seen HTC slip in this area. The M9 continues this trend, which is somewhat concerning as the display of a slate smartphone tends to be a critical part of the experience. Some may be eager to point to AMOLED as an alternative, but the problem is that HTC has failed to integrate a high quality LCD into the M9. In the near future though it seems that it may make sense for HTC to move to AMOLED. However, it’s unlikely that such a move would result in any reduction of bezel size as all current displays require a display driver that must be placed directly next to the display.