SilverStone was not kidding when they said that this is the world's smallest 1500W power supply. The 180mm chassis is certainly not adhering to standard ATX specifications, yet it is significantly shorter than any 1500W power supply we have seen to date. With its modular design and a short cable kit available, SilverStone mentions that someone could even install this in some HTPC and small form factor cases, and even recommends some of their HTPC cases for use with the ST1500-GS. We cannot possibly fathom why anyone would want to power any such system with this behemoth, but the possibility is there. 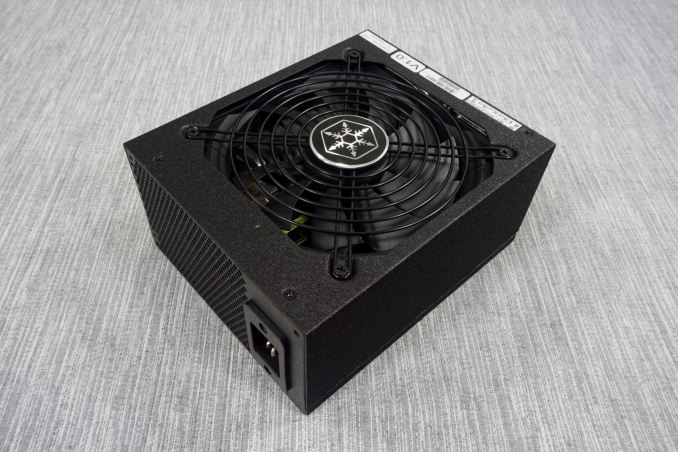 The chassis is sprayed with a grainy black paint that is smudge and scratch resistant. SilverStone attempted to engrave the whole company logo across the top of the chassis, somewhat unsuccessfully, as it is barely visible to the naked eye in a well-lit environment. 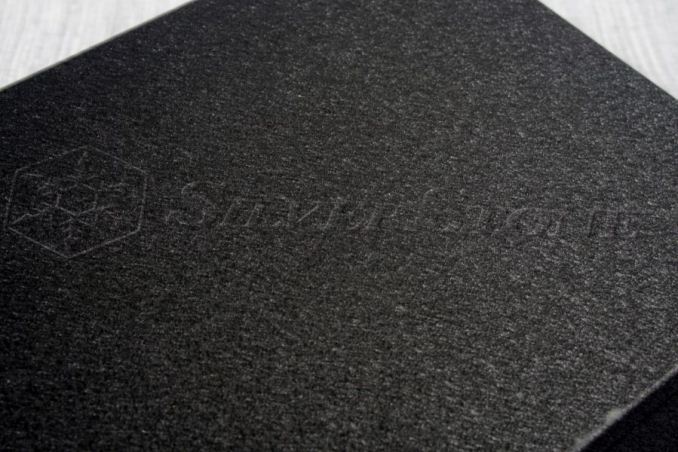 A metallic badge with the company logo can also be seen at the center of the fan finger guard. The sticker with the electrical specifications of the PSU is on the left side of the chassis, visible from a windowed side panel if the PSU is installed with its fan facing downwards. 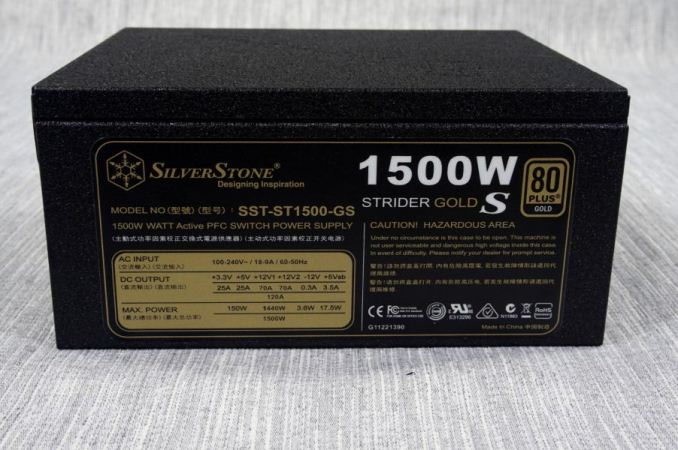 The only interesting thing at the rear of the PSU is the lack of a simple on/off switch. Apparently, certain sacrifices need to be made when trying to fit that much power in a 180mm long chassis. The numerous connectors for the modular cables can be seen at the front of the chassis, with a sticker indicating which connector corresponds to each cable. SilverStone also placed small plastic caps on the connectors, which is definitely more of an aesthetic than a practical enhancement. 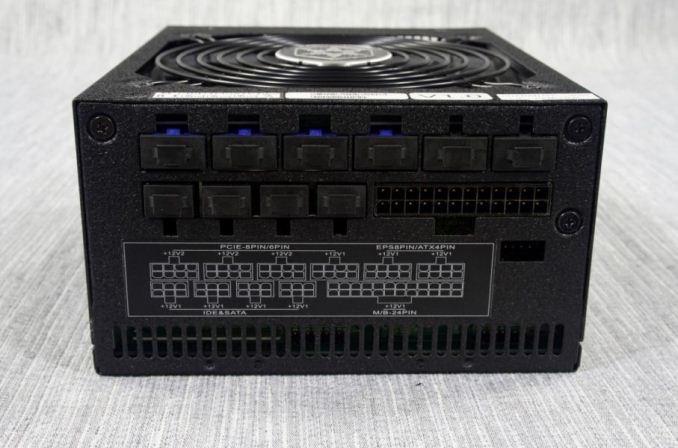 The CPU and PCI Express cables do not share the same connectors, which differ in color. These are also keyed, meaning that you cannot insert either cable into the wrong connector, even if they both have the same number of pins. The 24-pin ATX cable has a little connector beneath it for the voltage sensing connector, which is oddly recessed almost half a centimeter inside the body of the unit. The smaller connectors are for SATA/Molex cables.

A standard black 135mm fan from Young Lin Tech is what lies beneath this unit's circular finger guard. The model of the fan is DFB132512H, which means a dual ball bearing system and a maximum speed of 2500RPM. Such a speed is insanely high for a 135mm fan, which would be pushing over 120CFM if it were to reach it. As with any modern PSU, the ST1500-GS features thermal control circuitry adjusts the speed of the fan according to the load and the temperature of the unit; we can only hope that it will not get anywhere near its maximum speed. 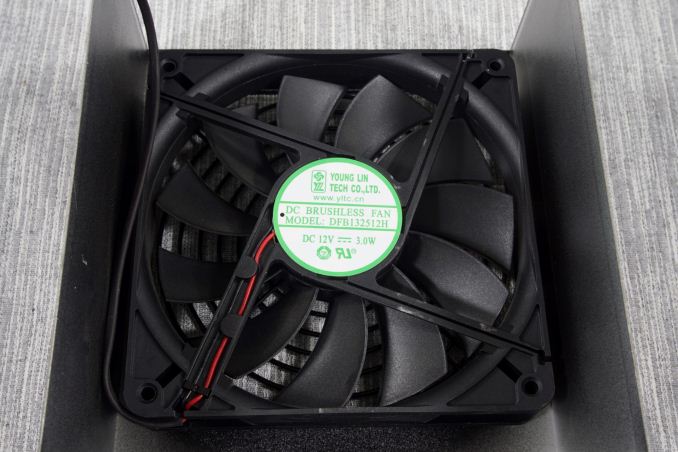 For the creation of the ST1500-GS, SilverStone enlisted a not very well known but respectable OEM - Enhance. The layout is extremely well designed, especially considering the vast number of components that the designer had to fit in such a small chassis. Many PSU layouts are a mess with half as many parts. The designer certainly did not hold back either; even though this is a 1.5kW top-tier PSU, everything about it is an overkill. The filtering stage comprises of four Y capacitors, four X capacitors and two filtering inductors. There are two NTC thermistors to limit the inrush current, which would be immense considering the size of the capacitors, with a relay for each. The relays will isolate the thermistors after their job is done, minimizing energy losses. The primary conversion bridges share their own small heatsink right after the filtering stage. 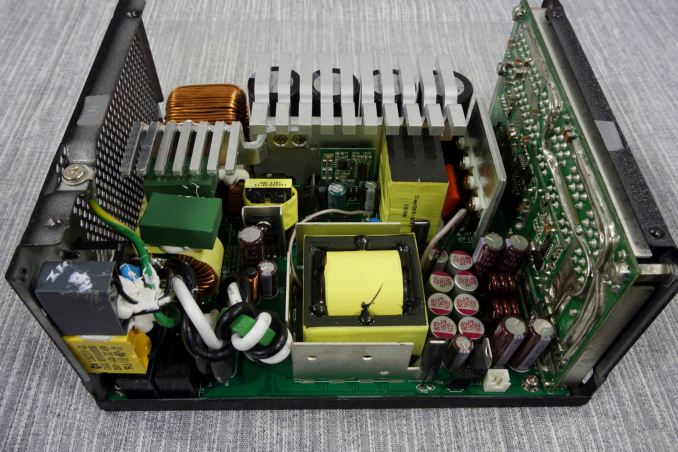 Despite its appearance, the huge heatsink along the side of the PSU only holds the Active PFC chips, three transistors and a diode. The passive components of the PFC circuit are a large filtering inductor and not one, not two, but four Matsushita (Panasonic) 270μF/420V capacitors. Without the NTC thermistors, the inrush current of this PSU would probably be high enough to de-solder or even melt wires. A simple, plain heatsink that looks like nothing more than a metallic plate holds all four transistors of the primary inversion stage, which form a full-bridge configuration. 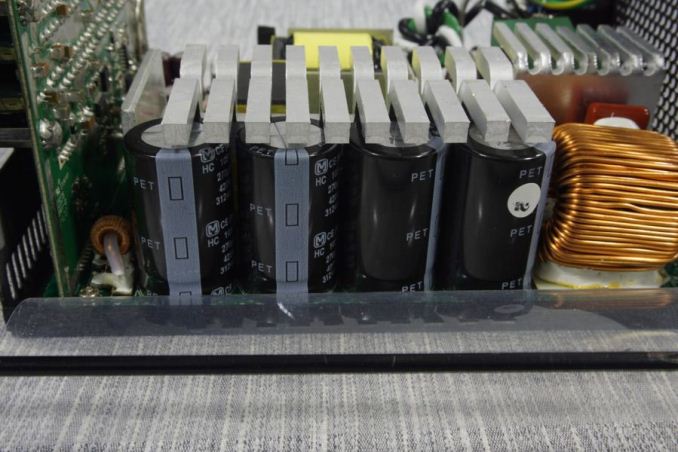 The secondary conversion stage transistors are at the bottom of the main PCB, on a thermal pad. SilverStone is cleverly using the body of the unit itself as a heatsink for the secondary side, which will normally get (very) warm if the PSU is loaded. This however will also have a side effect that we cannot quantitatively assess within the frame of this review - it will increase the internal temperature of the system that will be powered by this PSU.

The quality of the Strider Gold S is a very complicated matter. As we mentioned above, the PFC stage electrolytic capacitors are supplied by Panasonic. Most of the secondary stage electrolytics are supplied by Nippon Chemi-Con and Rubycon, both of which are very reputable companies. There, unexpectedly, a TAICON electrolytic capacitor appears. TAICON is a good manufacturer as well but the company does not share the reputation of either Nippon Chemi-Con or Rubycon. Still, the role of that capacitor is not highly important, nor it is installed in an area that is expected to get overly hot. The polymer capacitors are supplied by Teapo, which SilverStone selected because these are almost impossible to fail regardless of the manufacturer. 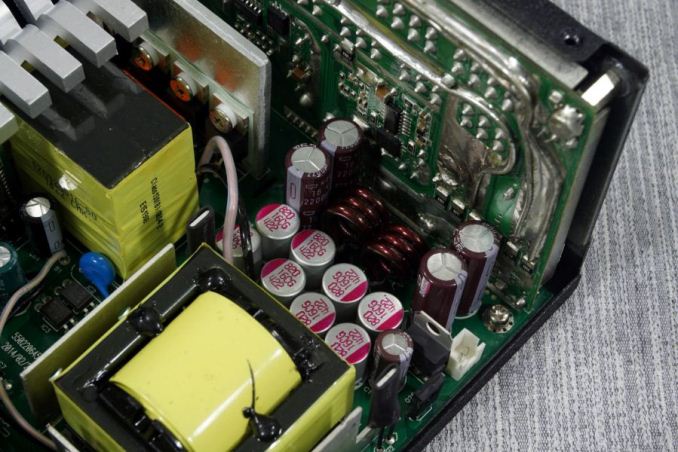 It also may be exceptionally well designed, but on balance the assembly quality is mediocre. The soldering job is messy, with copper wires dipped in solder serving as power rails (see above) and numerous joints that look as if they have been manually performed by a complete amateur, which comes across as a little worrying.