SteelSeries is best known for their keyboards, with MSI using SteelSeries designed keyboards in their gaming laptops for quite a few years now. They have a variety of other peripherals as well, including mice, surfaces, headsets, and various gaming controllers. Focusing on just keyboards for a moment, they have two product lines, the G-LINE features mechanical Cherry MX switches while the APEX line is for users that prefer membrane switches. (Yes, apparently such people do exist.) Here's where things get interesting.

At CES, SteelSeries was showing off a new mechanical switch that they worked with Kailh to design. They're calling this the Linear QS1 switch, and it's completely different from existing mechanical switches as far as I can tell. It features 3mm travel with a 1.5mm actuation point, 45cN force, and it's rated for 60 million actuations. That's nothing particularly new for mechanical switches, but what sets the QS1 apart from other switches is the feel. Basically, SteelSeries set out to create a new switch that would feel more like a membrane switch, but it would keep the longevity and durability properties of a mechanical switch. That switch is the Linear QS1, and it will be showing up in the new APEX M800 keyboard. 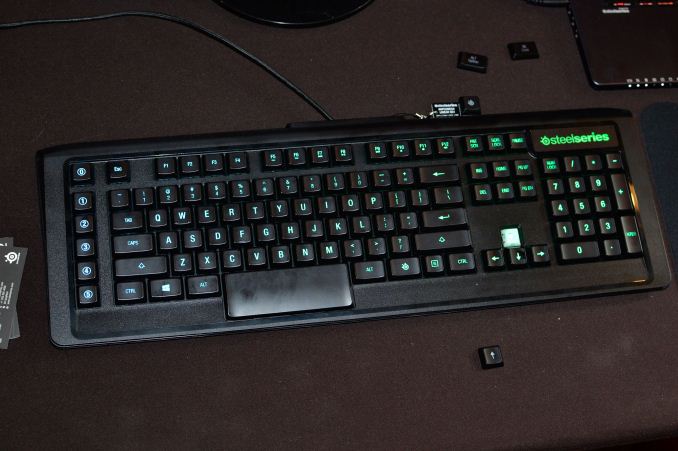 The switch also features full RGB LED lighting and the M800 will have per-key programmable lighting and effects available via software. Unlike some other companies (e.g. Monoprice and Rosewill), SteelSeries already has a lot of experience with creating software for controlling keyboard backlighting, macros, etc. so this is a natural fit for them. The M800 has macro support as well as anti-ghosting with 256-key rollover. (Why 256 when there are only 110 or so keys? Probably because they used eight bits for monitoring the rollover state as there was no benefit to only using seven bits.)

As far as the performance of the QS1 switch, SteelSeries says it's "built for speed" and will target gamers. I'm probably not skilled enough at any games these days to notice the difference, but typing on the keyboard felt good. Keyboards are inherently highly subjective, so it's impossible to declare one type of switch as being universally superior, which means the QS1 is really just one more option – albeit a SteelSeries exclusive. Pricing is currently targeting $199 MSRP, with availability sometime in the coming months. 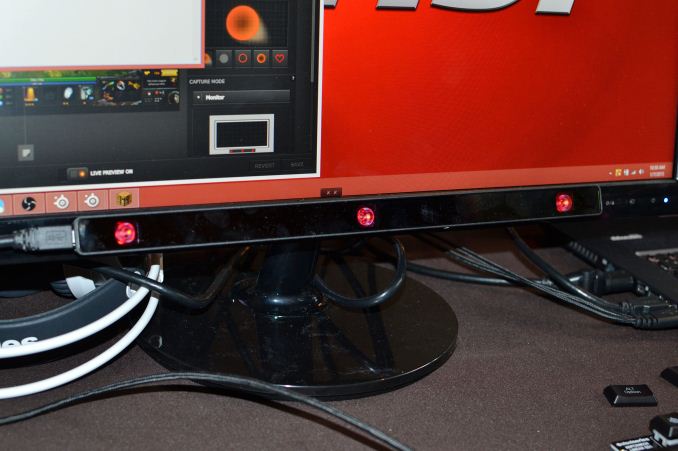 The other product SteelSeries was demonstrating is their Sentry Eye Tracker that mounts to the bottom of your display. With their software the Sentry allows is the creation of an overlay in game streaming that shows where the user is looking on the screen. They had some recorded videos showing some top professional gamers using Sentry, and it was interesting to see exactly where on the screen they were looking during a match. SteelSeries also mentioned that the Sentry tracks statistics for supported games – e.g. how much time the user spent looking at the mini-map in DOTA2 or StarCraft II – and that some of the pro-gamers have used that to improve how they play, working to train themselves to not waste time looking at their cool-down bar but instead getting a better sense for how long it takes for an ability to recharge.

Anyway, it's not something I would use, but when watching a game stream it does actually create a more interesting feed (assuming it's used properly). The Sentry Eye Tracker is available already with an MSRP of $199, so it doesn't come cheap, but it could be used in other ways as well – e.g. controlling the mouse cursor with your eyes (which is really where the technology came from in the first place).