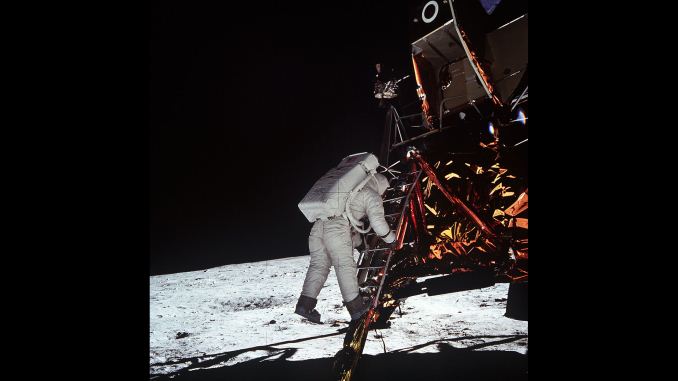 When NVIDIA held their press briefing on the upcoming GM204 Maxwell GPUs back in September, one of the big new features for Maxwell 2.0 was VXGI – Voxel Global Illumination. As part of the presentation, NVIDIA did their best to recreate the famous photo from the lunar landing that took place 45 years ago, and in the process they hoped to debunk some of the "inconsistencies" that conspiracy theorists have been going on about for decades.

Today, on 11/11, the Apollo 11 demo is now available to the public. Of course it's doubtful anyone that believes in the conspiracy theories will change their mind thanks to the NVIDIA demo, but it's at least a demonstration of VXGI that end users can run. Among other things, you can adjust camera exposure, sun position, and toggle Neil Armstrong on/off (he had to be outside the lunar module to take the photo after all), all of which affect the scene rendering in real time.

Since the Apollo 11 demo uses VXGI, it does require NVIDIA's latest GM204 GPUs in order to run – Radeon and older GeForce users need not apply. I tested it with a GTX 970 and it ran "okay" (15~35 FPS, depending on the view), indicating as we suspected that you'll need a whole lot of GPU power if you want to do this level of VXGI in a real-time game. The demo also appears to be locked to a resolution of 1920x1080, or at least there's no feature to change the resolution within the demo itself. Considering the frame rates are already a bit low, however, trying to render VXGI at 2560x1440 would really require at least two GPUs to do it justice. [Update: reader fallaha56 passed along information below: from the command line you can use "-ResX [width] -ResY [height] -Fullscreen" to set a custom resolution; 4K support appears to require too much memory, but performance at 2560x1440 is quite choppy with a single GPU, as expected.]

Below is a gallery of screenshots from the demo, and if nothing else it's a sign of things to come with global illumination. Real-time path tracing is still a long ways off for consumer hardware, but VXGI provides a better approximation of path tracing compared to existing algorithms and we could see the technology start showing up in games within the next year or two. The demo was built using Unreal Engine 4 as well, and Tim Sweeney has talked about voxel-based lighting in the past, which means there's a good chance VXGI support could end up widely adopted by UE4-based games. In the famous words of Captain Picard, "Make it so!"