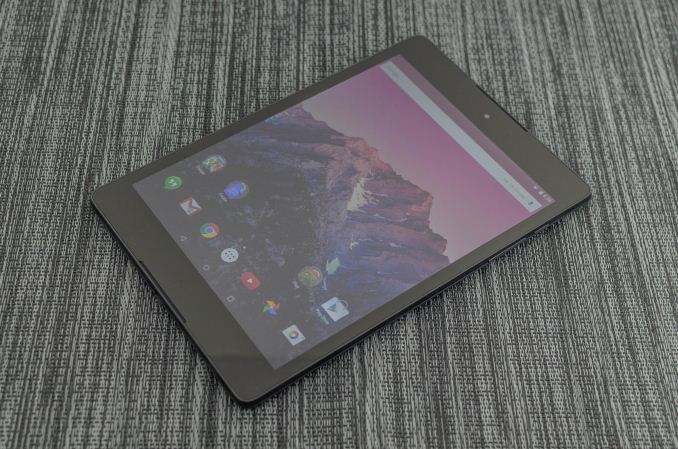 For the past few years, we’ve seen Google place significant emphasis on price as a way of competing with other tablets on the market. The original Nexus 7 managed to deliver a good tablet experience without the conventional 500 USD price for a tablet. The successor to the Nexus 7 was even more incredible, as it pushed hardware that was equal to or better than most tablets on the market at a lower price. However, as with most of these low cost Nexus devices not everything was perfect as corners still had to be cut in order to hit these low price points.

The Nexus 9 is supposed to be the polar opposite. Instead of driving price as the primary differentiator, Google has refocused on the high end tablet market for the Nexus 9. With a new focus on industrial and material design, along with some of the latest and greatest hardware in every dimension. HTC has been brought on as a partner for the first time since the Nexus One to enable this vision. In addition, NVIDIA’s Tegra K1 with Denver CPUs can be found inside as the launch platform for Android Lollipop on 64-bit ARM v8. The Nexus 9 also has a 4:3 aspect ratio on its display, a notable departure from the 16:10 ratio that was shared with phones. There’s also the addition of BoomSound speakers on the front and a metal frame running around the edge of the device for improved in-hand feel. The rest of the key specifications can be found below.

While specs are nice, one of the key areas where the Nexus 9 has to push the limits is in industrial and material design. To this end, Google seems to have mostly delivered, but not quite at the levels that one might have wished. The back continues to be a soft-touch plastic, with almost nothing other than required regulatory text, the Nexus logo, and the camera with its LED flash. I definitely like the feeling of the back cover with its slight outward curve, but on the black model the finish seems to attract smudges quite easily. This is unlikely to be a real problem, but those that are extremely concerned with fingerprint smudges may want to look into getting the white version of this tablet. There is a small amount of give in the dead center of the device, but this is something that one has to actively try to do instead of being immediately obvious. In my experience, the same is true for the Nexus 5 as well which calls into question whether this is a real issue. 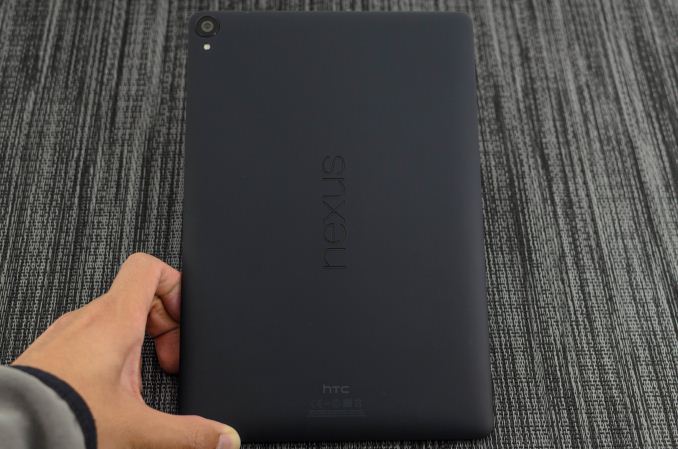 Outside of the back cover, the metal rim definitely makes for a significant contrast in texture and feel. The texture seems to be the same as the M8’s gunmetal grey, with an extremely delicate brushed texture. Unfortunately, this does mean that the metal feels glossy in the hand rather than matte, and I suspect that a more standard matte texture would be better in this case. At any rate, it still feels great to the touch, especially when the device is cold. The metal frame has a noticeable outward angle to it, and does make it feel like the One (M7) in that respect. Along the left side of the rim, the device is barren but there is a microUSB 2 port along the bottom and a hole for one of the microphones on the device. Along the right side, we see another microphone hole, the volume rocker, and the power button. While the feel of the buttons is relatively clicky and the actuation is solid, the buttons are definitely a bit on the thin side and are hard to locate and press. The top side has a 3.5mm jack along the top right, and a single plastic line that breaks up the metal frame in line with the speakers. 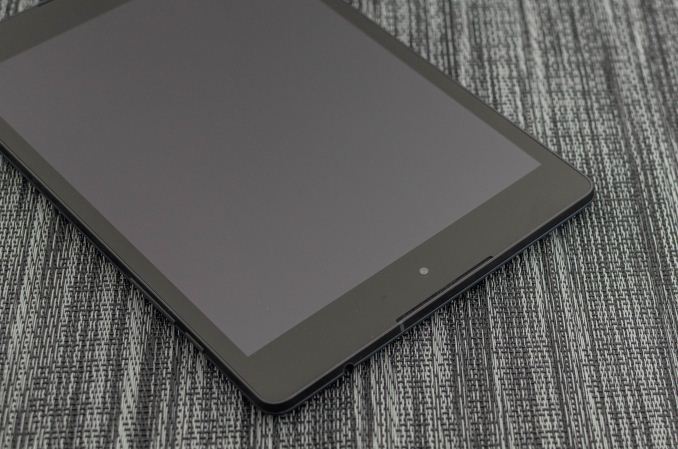 Speaking of the speakers, unlike the One (M8) and (M7) where the front-facing speakers are a major design element, the speakers on the Nexus 9 are noticeably hidden away from view. They’re definitely present, but the speaker grilles are recessed and black to match the bezels. The recessed nature helps with the design minimalism that is pervasive throughout the Nexus 9, but it does mean that it’s pretty easy for lint and dust to find its way into the grilles. There’s also a noticeable lip around the entire display which makes for a noticeable rounded metal edge, which should help to some extent for drop protection although the thickness of the lip is really quite thin. This means that it can only help with drop protection on flat surfaces. Other than the speaker grilles, the front of the tablet is almost barren. There’s a front-facing camera on the top, and a light sensor to the right of this camera. Other than this, there’s only a single LED at the bottom of the device but it appears that this hasn’t been enabled in the system as I only see it active when charging the device from a fully-depleted state. 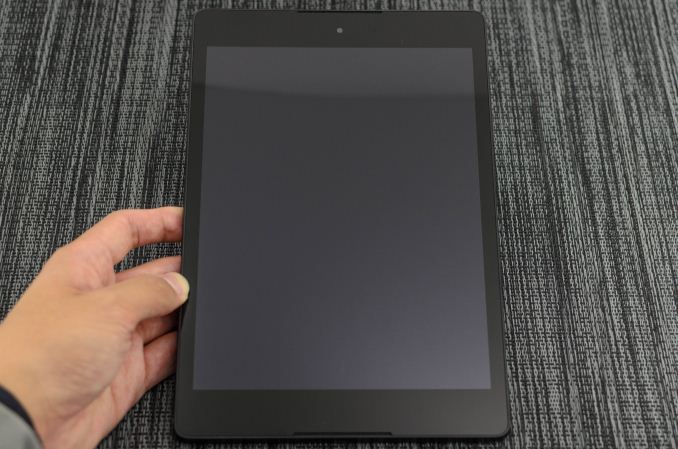 Overall, the Nexus 9’s build quality is decent. It isn’t quite as incredible as an all-aluminum unibody, but the feel is quite comfortable and the design fits well with the rest of the Nexus line-up. I do wish the metal frame had a bit more matte feel to it and the buttons do need some work, but I otherwise don’t really have a lot to complain about in this device. It is quite obvious that disassembling the device starts with the back cover though, as it’s pretty easy to stick a fingernail between the back cover and metal frame to pry it apart like the One X.