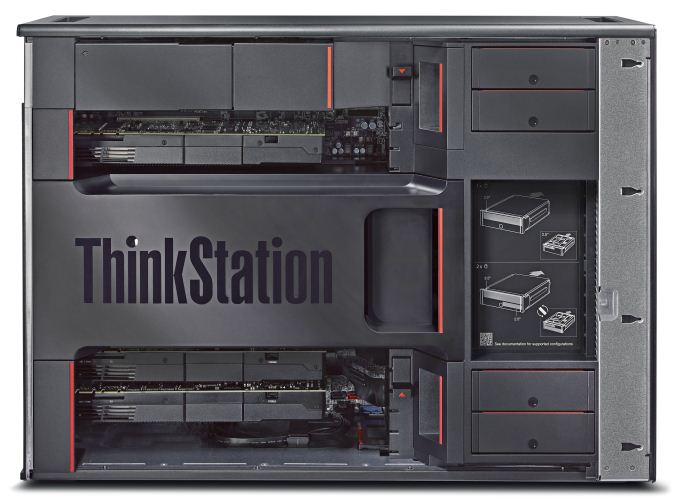 As much as I would like to be at SIGGRAPH, one of the reasons to visit would be to see Lenovo’s latest launch of their Haswell-E Desktop Workstation series. One of the key elements to the workstation market in recent quarters is to develop a professional-grade system that can encompass all the critical industries that require horsepower under the desk: engineering, media, energy, medical, finance and others. These systems have to be verified with industry standards to even be considered by these markets, but also the shift to Haswell-E and DDR4 will be an all-important factor for those that rely on speed and performance. One of the issues that these system manufacturers have is to define themselves in the market – Lenovo is already a big player in many other PC-related industries, so listening to customers is all important when trying to develop market share. 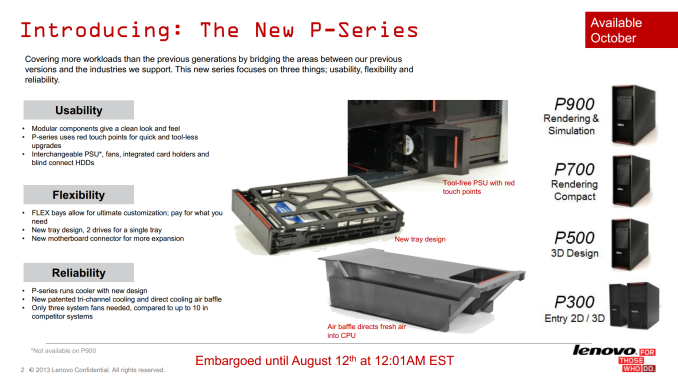 The new ThinkStation P series will be based around the LGA2011-3 socket, using Xeon processors and high capacity DDR4 memory. Given the nature of the platform, we can assume that the DDR4 will be ECC by default. For GPU Compute Quadro is being used, with the top line P900 model supporting dual Xeons alongside up to three Quadro K6000 graphics cards and up to 14 storage devices. All the P series will be certified to work on all key ISV applications, and via Intel they are quoted as supporting Thunderbolt 2, which should make for interesting reading regarding the PCIe lane distribution or PLX chip distribution depending if it is onboard or via an optional add-in-card.

In terms of that all important product differentiation, the P series will use ‘tri-channel cooling’ and air baffles to direct the cool air immediately to the component in question and then out of the chassis without touching other components. This essentially becomes a more integrated solution than the compartmentalized chassis we see in the consumer market, except when the company makes the whole system, the company can control the experience to a much tighter level. 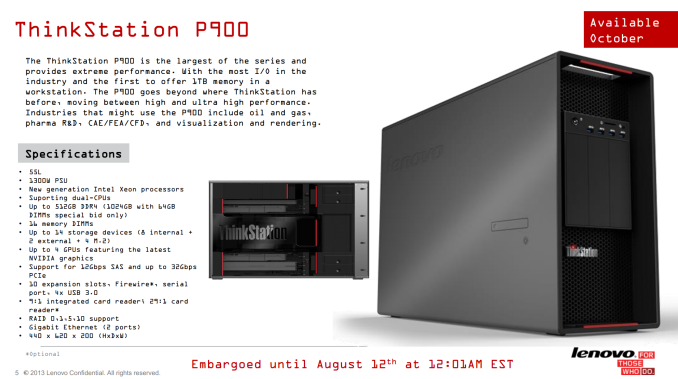 The P series also runs a trio of ‘FLEX’ themed additions. The FLEX Bay is designed to support an optical drive or the FLEX module which can hold an ultraslim ODD, media reader or firewire hub. The FLEX Tray on the P900 allows each of the seven HDD trays to support either one 3.5” drive or two 2.5” drives, hence the fourteen drive support mentioned earlier. The FLEX Connector is a mezzanine card allowing users to add in storage related cards without sacrificing rear PCIe slots, meaning that this connector brings this extra card away from the other devices, presumably at right angles. Lenovo is also wanting to promote their tool-less power supply removal without having to adjust the cables on the P700 and P500, which suggests that the PSU connects into a daughter PCB with all the connectors pre-connected, allowing the PSU to be replaced easily.

Lenovo is also adorning their components with QR codes so if a user has an issue the code can be scanned such that the user will be directed to the specific webpage dealing with the component. The chassis will have integrated handles for easier movement or rack mounting. Lenovo is also promoting its diagnostic port, allowing the user to plug in an Android smartphone or tablet via USB for system analysis using the ThinkStation app. 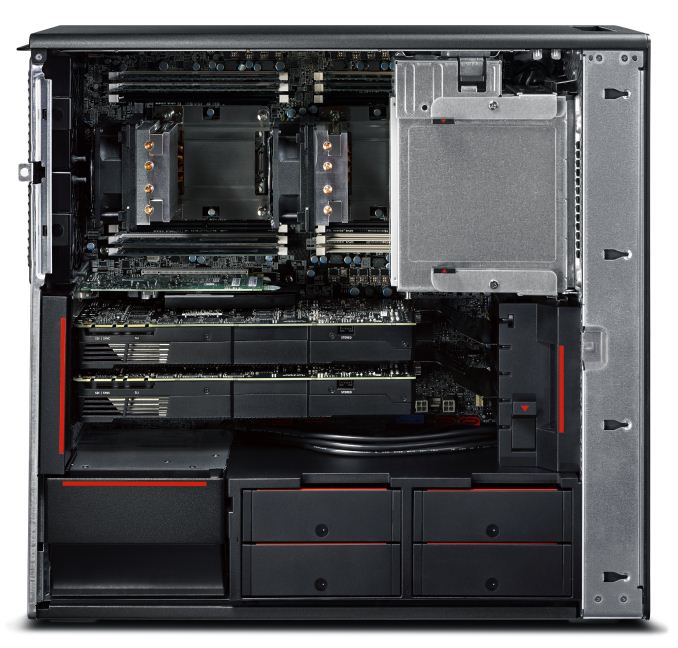 Until Haswell-E and the motherboard chipsets are officially announced, Lenovo cannot unfortunately say more about the specifications regarding the series beyond memory capacities, DRAM support and power supply numbers, however they do seem confident in their ability to provide support and an experience to their ThinkStation users. We have been offered a review sample later in the year when we can test some of these features.

Addition: Ryan recently met with Lenovo last week where we were allowed to take some images of the chassis and design: