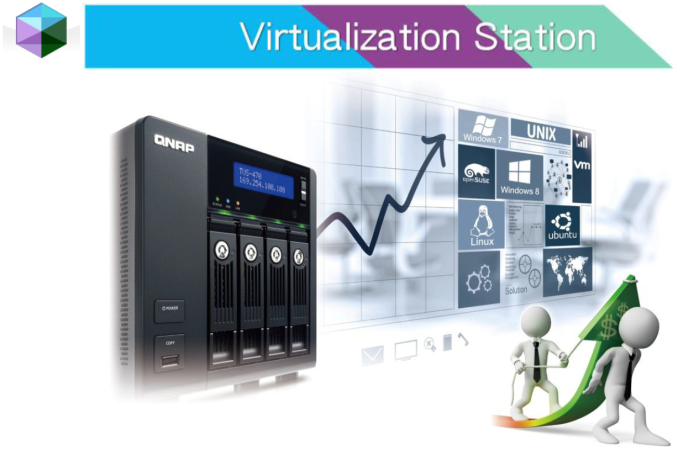 Virtualization has been around since the 1960s, but it wasn't till Intel and AMD started introducing hardware acceleration features that the feature started gaining mainstream focus outside enterprise applications. In addition to several applications in the enterprise space, virtualization has also started to lower the cost of IT infrastructure even for SMBs (think in terms of virtualized Exchange servers and similar applications). However, does the current state of virtualization offer any applications / benefits to home users? What are the ways in which regular users can take advantage of it? The answer to the second question is partly provided by QNAP's Virtualization Station package in the TS-x51 series. The answer to the first question will decide whether the Virtualization Station package can offer compelling enough benefits for users to choose the QNAP TS-x51 series over competing models from other vendors.

Put simply, the virtualization concept that we are discussing today refers to the creation of computing resources that exist 'virtually' - i.e, independent of the underlying hardware infrastructure. Most commonly, the creation of a virtual machine (VM) implies the setting up of a computer (guest machine) on certain hardware resources (host machine) such that the software / OS being run on the VM is separated from the host's hardware resources. An example could be the setting up of a Linux distribution as a VM on a computer running Windows as the host OS. Software developed for Linux can be run on the VM. The combination of hardware and software on the host machine which enables the creation and running of VMs is called as the hypervisor.

Hypervisors come in two flavours: bare-metal and hosted. While bare-metal solutions install directly on the hardware (VMware ESXi, Citrix XenServer and Microsoft Hyper-V), hosted ones run on top of a host OS. As examples of the latter, we have Oracle VM VirtualBox, QEMU and Hyper-V for Windows. QNAP's Virtualization Station is also a hosted hypervisor. It is based on QEMU (determined by taking a look at the running processes in the QNAP TS-451 with a VM active). We have already looked at the performance aspects of the TS-451 in an earlier review. 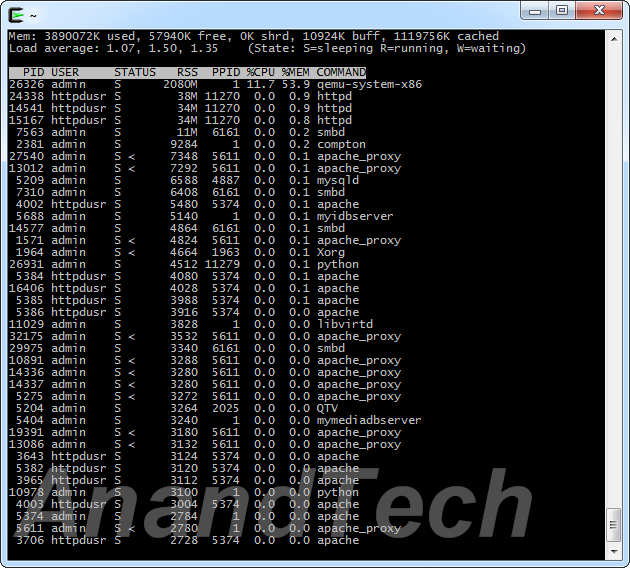 QEMU powers almost all of the Linux-based virtualization technologies. It takes advantage of the hardware-level support in processors (an additional reason why QNAP's Virtualization Station is supported only on models with CPUs supporting VT-x capabilities).

Readers interested in learning more about virtualization (particularly from a SMB / SME viewpoint) can peruse our articles focused on that market segment. In the rest of this write-up, we will take a detailed look at QNAP's Virtualization Station, followed by a hands-on report of how it works in the TS-451. One of the unique features of QTS 4.x is the support for SMB 3.0. We take this opportunity to evaluate SMB 3.0 support in the process of determining the performance impact of running a VM on the TS-451. We will also talk about power consumption numbers in the concluding section. Prior to all that, we take a look at the testbed infrastructure for evaluating performance as well as long term usage.

The QNAP TS-451 can take up to four drives. The benchmarks presented later in this review are with the unit configured in RAID 5 using four Western Digital WD4000FYYZ RE drives as the test disks.

The two ports of the TS-451 were link aggregated in 802.3ad LACP to create a 2 Gbps link for the cases in which no VM was active. In the active VM case, one of the network ports gets dedicated to the VM, while the other is reserved for NAS use. Our performance evaluation testbed configuration is outlined above.

Usage of WD Re drives and Netgear's GSM 7352S switch make sense for benchmarking purposes, but hardly reflect the general use-case of the QNAP TS-451. 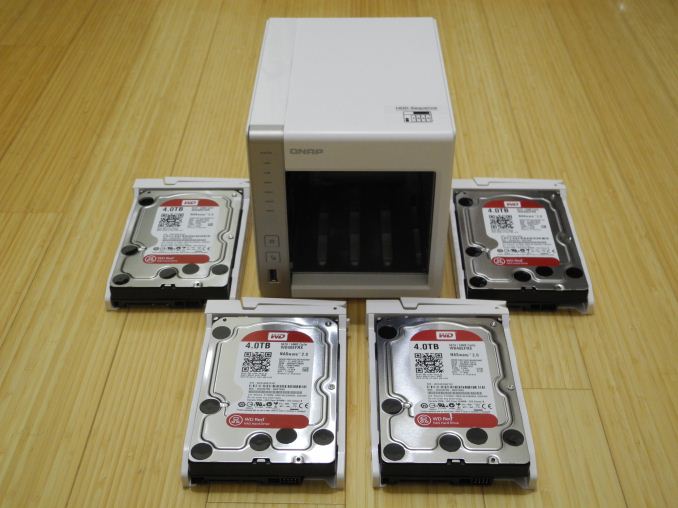 In order to simulate day to day usage, we utilized four WD Red hard drives in a RAID-5 configuration. The performance, as expected, doesn't scale up to what can be obtained with the Re drives, but that is hardly required for most applications of the TS-451.