With each successive generation, the general trend in smartphones has been better battery life. At the high end, this is now partially gated by process node, as we see major leaps in battery life mostly coming from newer generations of SoCs running on 28LP, 28HPm, and 20nm SoC in the near future. Of course, the other direction to scale has always been battery size. This is usually most easily accomplished by simply increasing the overall device size because the total PCB area is generally constant. After all, once you have all the necessary chips that make up a smartphone, you don’t suddenly need more of them to enable a bigger version of a smartphone. Therefore, the battery can be a bigger proportion of the phone overall.

This means that the Ascend Mate2’s large size enables it to use a 3900 mAh battery, with a 14.82 WHr capacity. While I’ve used multiple phablets of similar size, none of them truly approach the level of battery capacity that the Mate2 does. Huawei even offers an accessory that allows for the Mate2 to charge other phones by drawing on the internal battery and converting it into a 5V power supply. This seems to be a feature of the TI BQ2419X charge controller on board.

At any rate, to evaluate battery life on smartphones and tablets, we run a specific workload of web pages looping endlessly until the device dies, with the display calibrated to 200 nits, with background services disabled in order to create a controlled environment. 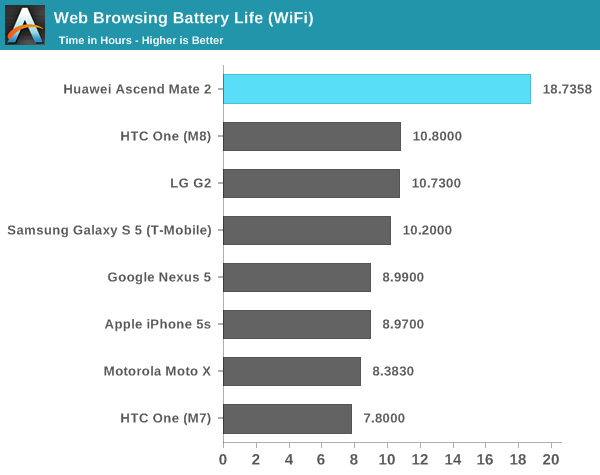 In the WiFi test, Huawei sets a new record for battery life here, almost to a ridiculous extent. The Mate2 does around 73% better than the One (M8) in this test. A combination of the relatively low pixel density display, large battery, and low power SoC (Snapdragon 400, MSM8928) can explain how Huawei pulled this off. 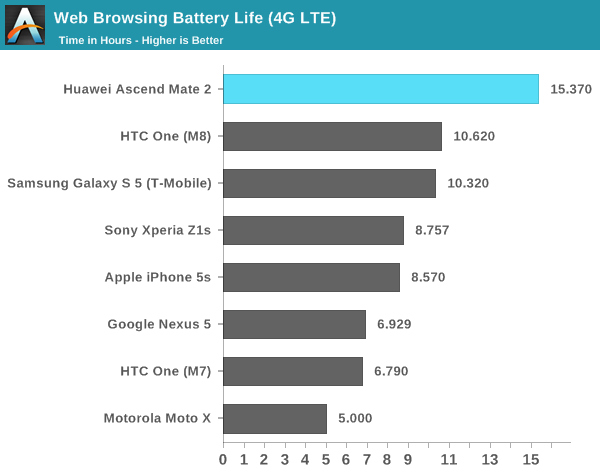 In the LTE test, while the result isn’t quite as game-breaking as in the WiFi test, Huawei still sets a new record. It’s around 48% higher than the result posted by the One (M8), and I suspect that part of the difference is due to the 28LP process that the integrated modem is built upon for the Snapdragon 400 (MSM8928), which would cause a noticeable increase in power consumption when compared to the modem in the Snapdragon 801, which is the same in design but built on a 28HPm process.

While battery life testing used to end at web browsing, we’ve now implemented more tests to see how devices perform under CPU/GPU stress tests run in endless loops. This is also run at 200 nits and controlled to ensure similar conditions from device to device. First, we’ll look at GFXBench, which does an endless loop of T-Rex until the battery dies. 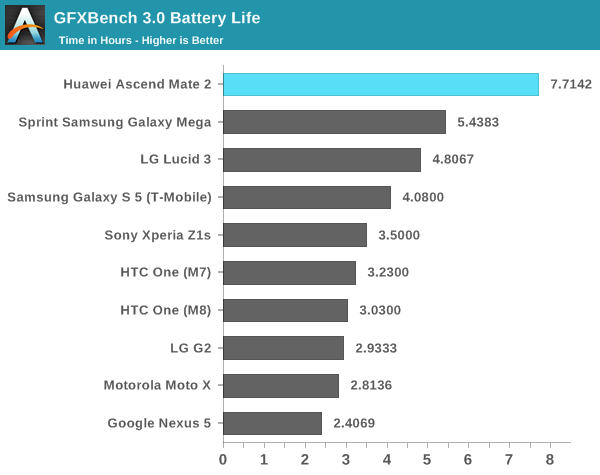 Once again, we see the same pattern. A combination of the device’s massive battery, and the relatively low power consumption of the Snapdragon 400 platform makes this phablet set new records in our battery life test. 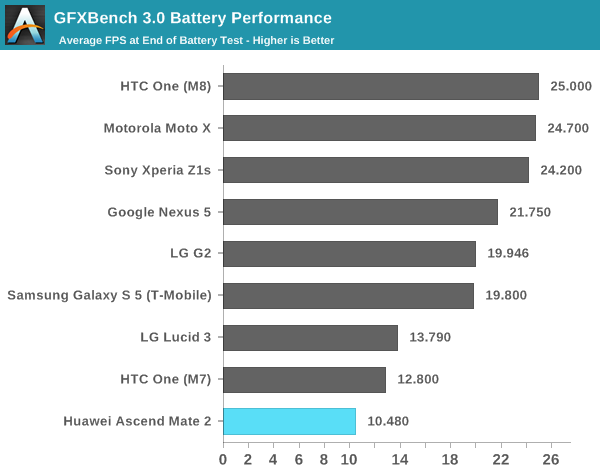 In the end of run FPS, it appears that the Mate2 effectively doesn’t throttle over time for GPU, although performance in general is a bit lower as a product of the older operating system. A more powerful GPU would produce better FPS throughout the run, although thermal throttling is more likely and battery life will be worse during the test. 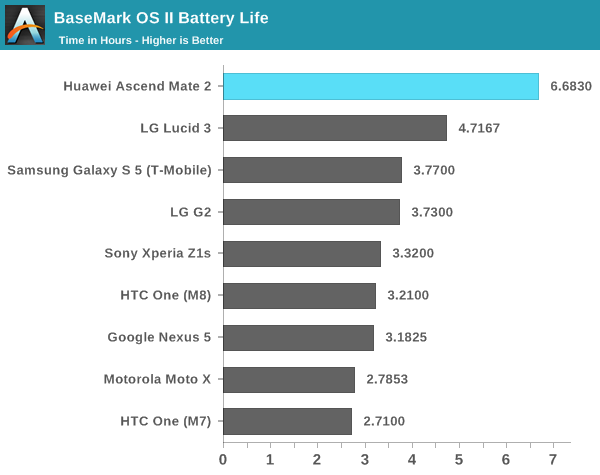 The next test is Basemark OS II on an endless loop. It’s almost a broken record now, but the Ascend Mate2 breaks our record for this test as well. 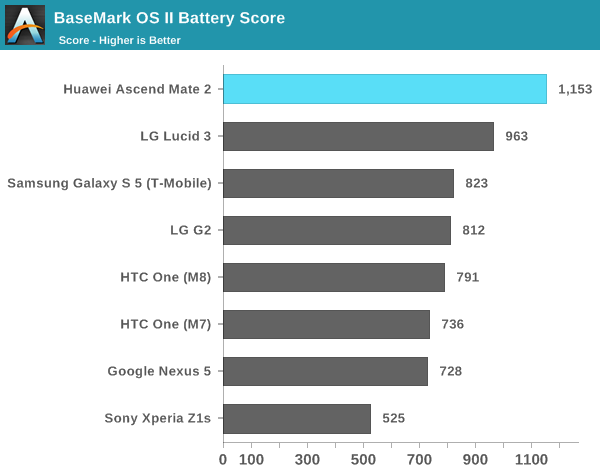 The sheer size of the device means that throttling is much less significant when looking at the final score recorded. This basically means that in most conditions, the Mate2 maintains performance without throttling. However, this is mostly a function of the low power SoC, and the trade-off is worse performance under initial conditions where all SoCs are usually not affected by thermal throttling. 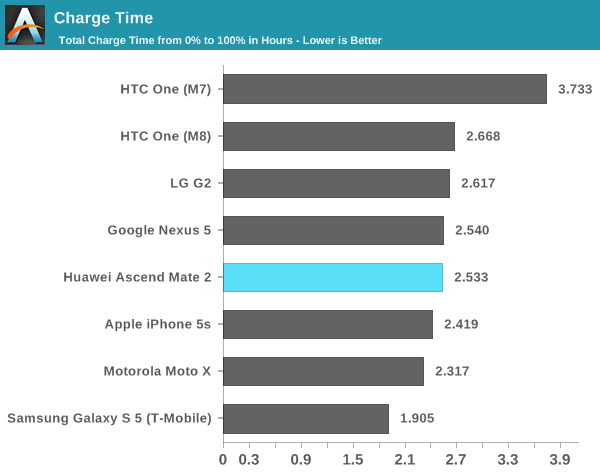 Surprisingly, the sheer size of the battery didn't affect the charge time. The Mate2 charges around as quickly as a Nexus 5. This is mostly because the Mate2 can afford to spend more time drawing the maximum possible current, which compensates for the larger battery size.

In short, there’s not much else to say here. For those that want the very best in battery life, the Ascend Mate2 is as good as it gets, based upon all of the phones that we’ve tested.