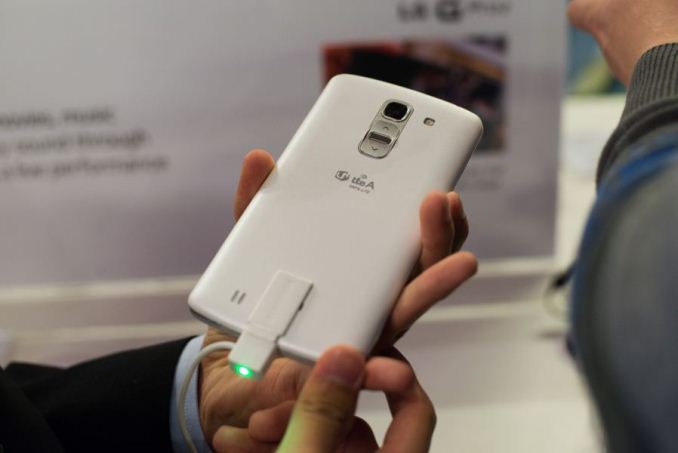 At MWC, LG has also announced a few new devices, some that fit in with their previous cadence of releases, and others that are something new. To start with the expected, the successor to the LG G Pro was announced, and it's a worthy successor to the G Pro and a close cousin to the LG G2. It uses a mildly updated version of the Snapdragon 800, the Snapdragon 800 (8974AB), and shares much of the industrial design and material feel with the LG G2, which includes the back-side mounted buttons, the curved back cover, and the same 13MP camera module with OIS for better low light shots.

Of course, there's also plenty that has changed. The display, while still the same 1080p resolution and IPS technology, is now a 5.9" size, which puts it firmly in phablet territory. While it may be large, LG is also claiming a 77.2% screen to frame ratio, which means that it isn't quite as big as a One max in the hand, and more in line with the Note 3. It's also well worth saying that the G Pro 2 has a matted texture that immensely improves in hand feel. The G Pro 2 also continues the G Pro's hardware line with a removable battery and microSD slot, which is why there isn't a curved battery, which is definitely a big reason why the G Pro 2 doesn't have a significantly larger battery than the G2 despite its much larger size, as seen below. 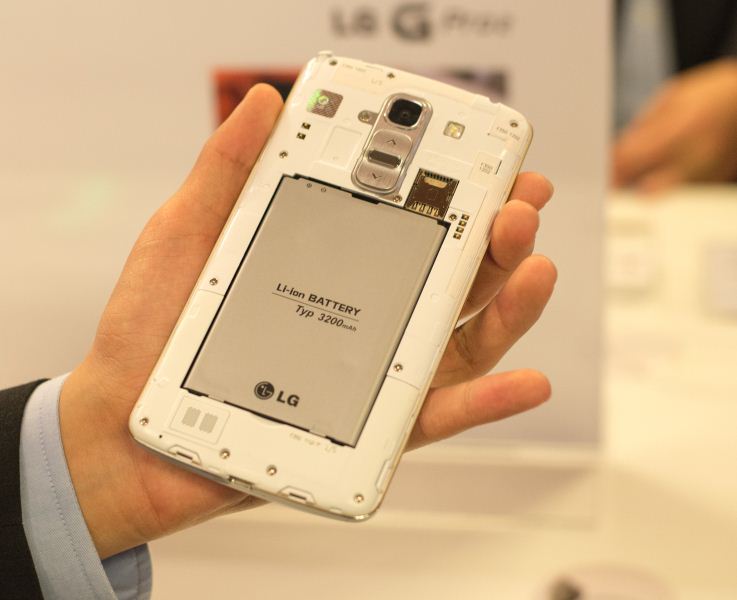 Outside of the hardware upgrades, LG also added some interesting new features. The Knock Code feature basically takes KnockOn and adds the equivalent of a pattern unlock to it, which is a logical next step. LG is emphasizing that this feature will be on all phones launching in 2014, although it's not clear whether this feature would be backported to phones like the LG G2. The Natural Flash feature is also a software feature that uses a photo with the flash off to appropriately set the white balance of the photo taken with a flash. OIS+, another software feature for the camera means EIS (software stabilization) is added on top of the OIS to better filter out unintended motion. While not as effective as increasing the quality of the OIS module due to the need to remove the ghosting image from the sensor, adding EIS will always be more effective than OIS alone. 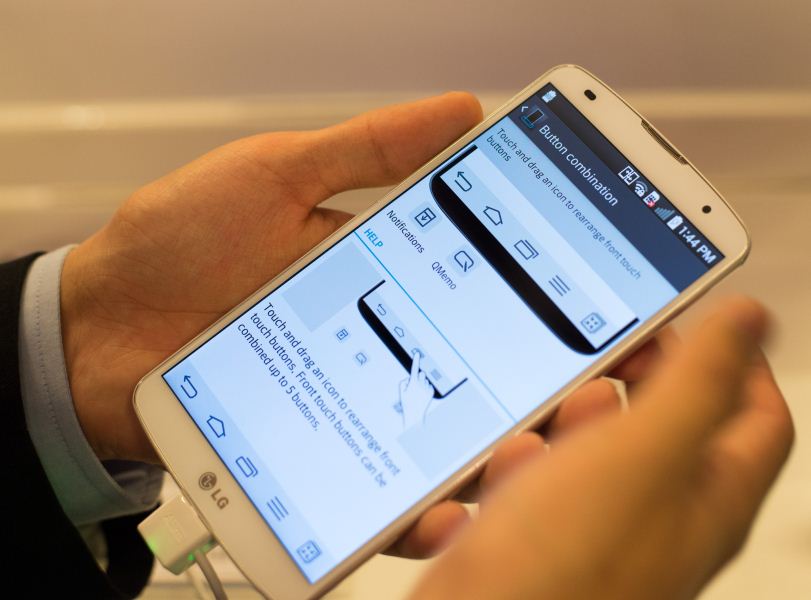 Also, based on initial use of a demo unit, the G Pro 2 can now have a multitasking button on the navigation bar as seen above, although it's not possible to make the menu key behave as on an AOSP device with software buttons. I really do like the new finish, which has a grippy finish that is miles ahead of the G2 in feel. 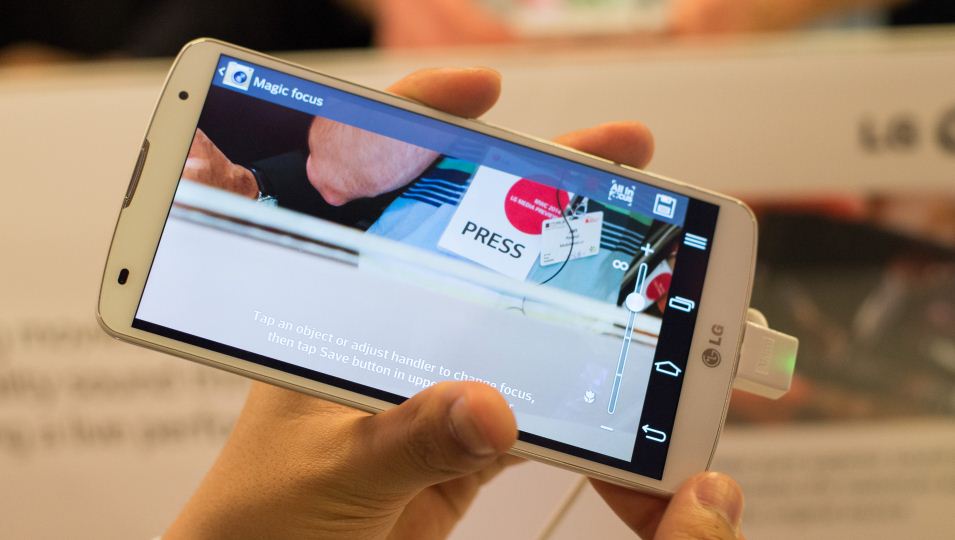 The camera is also good, but a lot of the new camera features like the refocus functionality are very much designed for static scenes only, as a shaky hand or any background movement will cause noticeable change in the photo from one level of focus to another, and becomes most obvious when the "all-in-focus" option is selected, which creates ghosting, much like HDR does on fast-moving objects. In a fast and shaky test, it also made for odd results as the first photo was less detailed (due to blur) than the next closer focal point. This is effectively a fact of life when it comes to any phone that doesn't do this functionality in hardware with a Lytro-style camera, so the Galaxy S5 will also have this issue. I also thought that such a function would have more gradations to levels of focus to allow for fine-tuning out of focus photos, but there's only around four different levels of focus between infinity and the minimum possible. 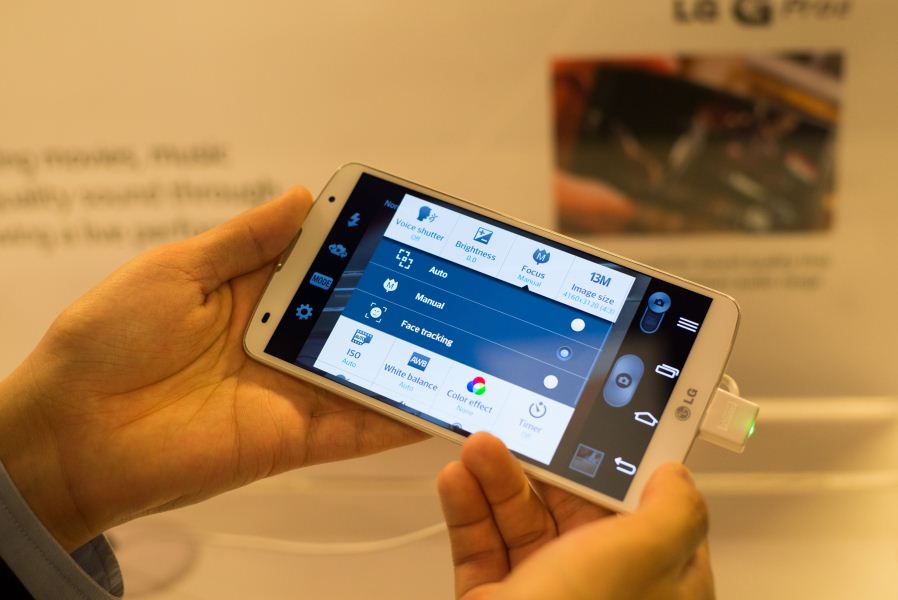 LG also continues to include the manual focus slider for situations where auto-focus fails, which should be included by more OEMs. 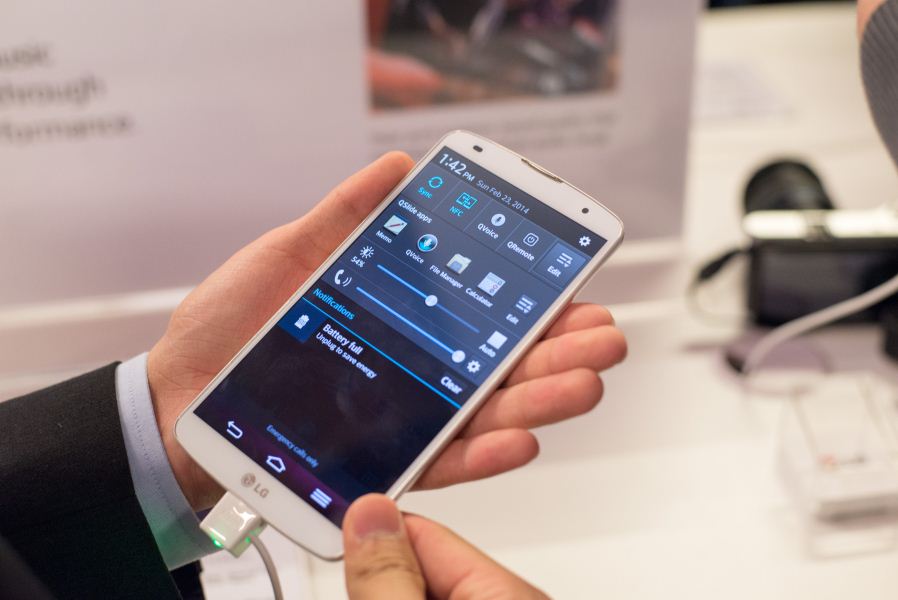 One of the most immediate things I also noticed was that LG continues to fill half of the notification space with things like QSlide, quick settings, and other various extra items. I question the wisdom of doing so, but as far as I recall, most of the unnecessary items can be hidden to restore some level of sanity.

LG also announced the G2 mini, a smaller version of the LG G2. While it's similar, it's more in the same vein of the G Pro 2 when it comes to the overall material feel, which is an evolution of the LG G2, so the shape is largely the same, although there's no word on whether it retains the curved battery. The hardware spec is definitely not at the same level at the G2, but it's tough to say whether the value proposition is gone. The SoC goes from the Snapdragon 800 to Snapdragon 400, or Tegra 4i. This would mean either a quad core Cortex A7 for all but Latin America, which gets the Tegra 4i which has a quad core Cortex A9r4 at 1.7 GHz. Both versions have LTE, which means it's the MDM9x25 block in the Snapdragon version as a part of MSM8926, and Icera i500 in the Tegra 4i part. Unfortunately, the only demo units available were the MSM8x26 parts, as seen below. 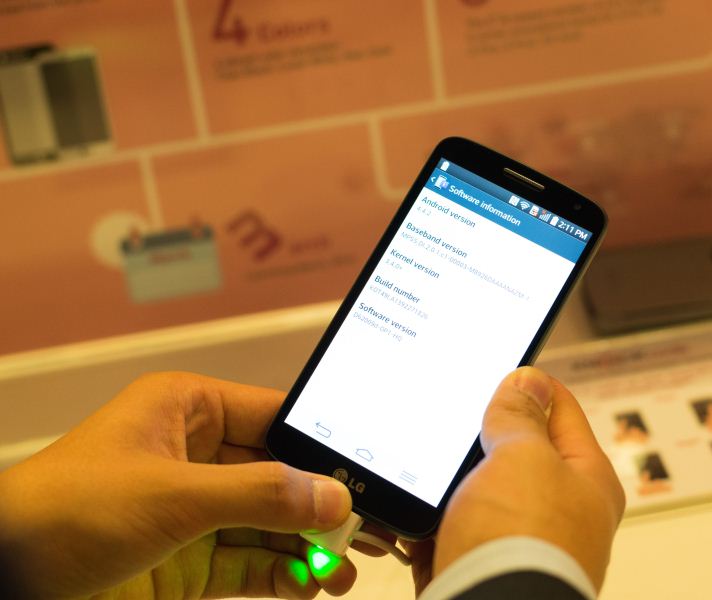 Outside of the SoC, the camera goes down to 8MP, but it's unsure whether the sensor is 1/3" or 1/4". The display is definitely smaller at 4.7" with a qHD panel, which would mean the resolution is below both the GS4 Mini and the One Mini.