Thecus makes it pretty clear on the package that the N2560 is meant for the average home consumer. There are claims of getting a complete installation up and running in 5 minutes and automatic RAID creation. Quietness and energy efficiency are also touted. The unit comes with a 40W DC adapter (12V @ 3.33A), a 3ft Cat 5 Ethernet cable, CD with firmware and allied software utilities, a warranty card and a quick start guide. The unit has a very plastic feel to it and doesn't look very well built (which is probably OK for a budget NAS).

The more obvious issue is the drive insertion mechanism. Instead of the standard drive bays which involves screwing in the drives, Thecus opts to make things easier for the users by doing away with separate drive holders. Four plastic strips are provided to place on either side of a 3.5" drive and these help in stabilizing them when being inserted into the drive slots. However, the mechanism didn't leave me with a positive impression. On the I/O side, we have both HDMI and SPDIF. These point to the multimedia focus of the N2560. 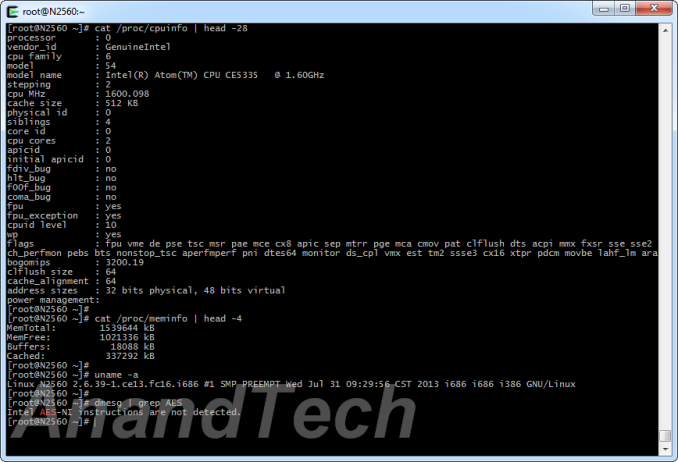 Internally, the Thecus N2560 uses the Intel CE5335 SoC with the Atom cores running at 1.6 GHz. These are the pervious generation Atom cores, which means no AES-NI support. The unit has 2 GB of RAM, but almost a fourth of it is reserved for the GPU. The OS itself is based on Linux kernel version 2.6.39.

Thecus expects users to use the Intelligent NAS utility (based on Adobe Air) to configure the NAS. While I found it passable to get the unit up and running, I felt more at ease with the browser interface. The Intelligent NAS utility provides information on the various file types stored currently in the NAS, configuration of copy tasks, a provision for firmware update and setup of cloud access with dynamic DNS. All in all, things that the average consumer should be quite happy with when taking advantage of the NAS.

Unfortunately, Thecus hasn't paid that much attention to the browser UI functions, which meant some of the options didn't work as intended. The most obvious issue was the fact that RAID rebuild failed when I tried to test that feature out. Interestingly, this was one of the issues I had reported to Thecus when evaluating the N4800 unit. Thecus units have consistently failed this test and despite the fact that I got the rebuild to work after a couple of attempts, I would have been certainly spooked if I had valuable data on the NAS.

Contributing to the multimedia focus is the presence of XBMC as an installable package. When I tested it out, the interface was restricted to 720p60. There was no HD audio passthrough, and multiple media files from our media streamer test suite just refused to play. I also found that XBMC loaded up more than 50% of the CPU even with the HDMI port disconnected. If one is not using that feature, it is advisable to terminate the process so that the CPU power is available for other NAS functions. 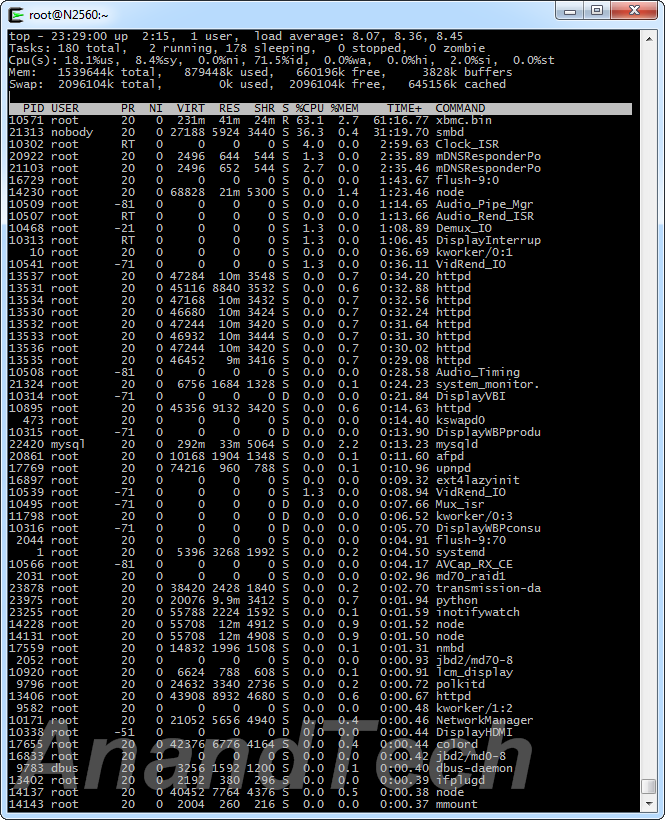 I wouldn't consider XBMC as a killer feature for the N2560. Currently, it is pretty half-baked. We have to wait and watch if Thecus is able to make any progress on this feature which currently seems like a novelty. Thecus claims on their product page that they are working with Intel to get the XBMC app out of the beta phase.

One of the apps available on the N2560 is the Plex Media Server. While trying to play back media on a mobile device with transcoding, we found that Plex doesn't take advantage of the transcoder built into the CE5335. With a single stream, CPU usage went up as high as 90%. Without taking advantage of the hardware transcoder, it is not going to be possible to stream multiple videos to multiple mobile devices.

In terms of miscellaneous features, we find that the N2560 doesn't support iSCSI or NFS. While the former can be excused in a NAS targeting home users, I find the absence of NFS very puzzling. Many media streamers work well with NFS shares. The N2560 doesn't support encrypted volumes or folders, though that can be excused in this market segment. However, Thecus does claim AES 256-bit encryption support for volumes on its product page. It is supposed to make an appearance in one of the upcoming firmware releases.