The while the original Nexus 7 was fast for the money, the new Nexus 7 is just fast. Moving away from NVIDIA to Qualcomm, ASUS and Google settled on the APQ8064 Pro. Although we originally assumed this would be a quad-core Krait 200 based SoC, Brian's teardown revealed the part number 8064-1AA. What's special about that part number is it implies newer Krait 300 cores, making the SoC effectively a Snapdragon 600. 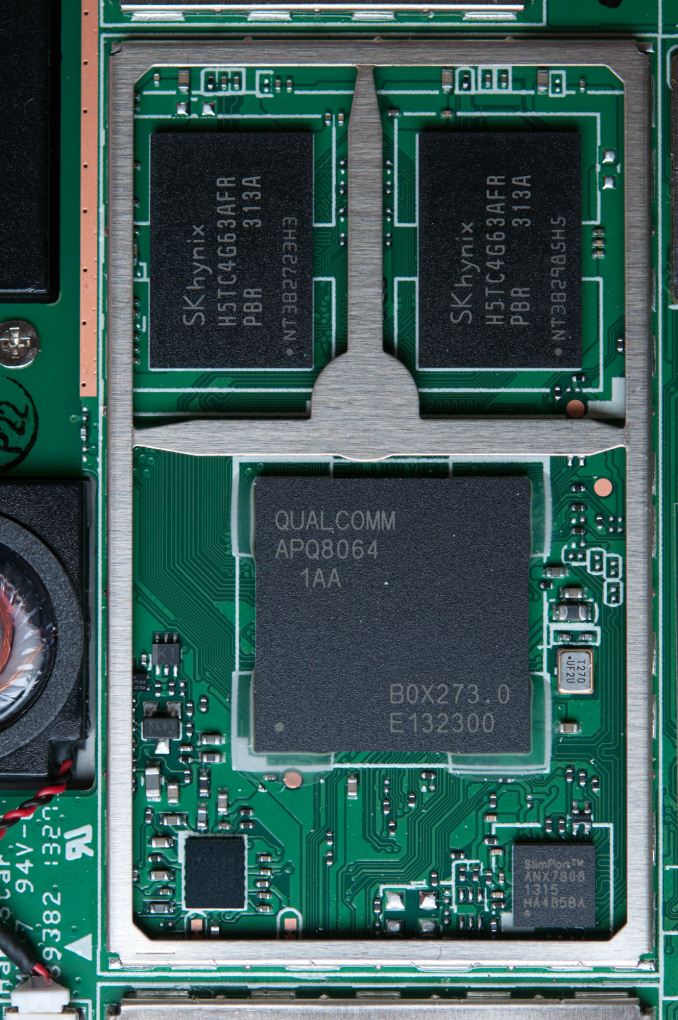 I was curious as to the impact of the lower frequency when combined with the potentially higher chassis TDP so I compared the Nexus 7 to the US Galaxy S 4. I turned to Geekbench because it offers a nicely woven mixture of single and multithreaded benchmarks, letting me look at peak available single core performance as well as what happens when multiple cores are active and working.

In this first graph we're looking at the first Krait 300 core running the workload. I've zoomed in to a small portion of the benchmark so we can get a better idea of CPU behavior: 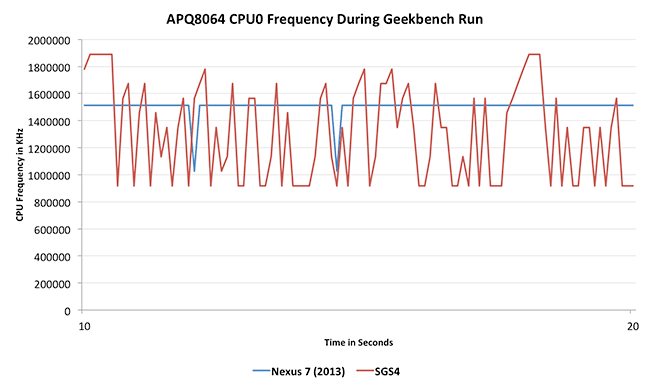 The Nexus 7's CPU0 is almost always pegged at 1.5GHz whereas we see a lot of bursty thermal management on the smaller SGS4. This isn't unexpected, but what ends up happening is the sustained performance advantage drops from a peak theoretical max of 26% down to a more reasonable average gain of ~8%.

I was curious to see if multithreaded workloads showed any different behavior. Here we're looking at the fourth CPU core (CPU3). Note that it's not always active, which is why you see parts of the graph drop down to 0KHz. Once again we see similarly static behavior from the Nexus 7. Even with all four cores active, when you need the performance the Nexus 7 delivers a full 1.5GHz. These tests are short enough where we don't see tremendous swings in frequency, but once again we do see some frequency modulation in a smaller chassis. 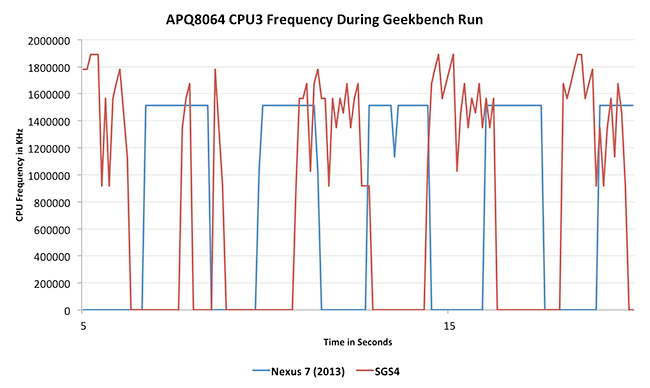 The end result is that the Nexus 7's 1.5GHz Krait 300 cores are slower than what you'd get in a Galaxy S 4, however the gap isn't nearly as large as you'd expect it to be thanks to the larger chassis and how the platform is tuned. The Nexus 7 can run at 1.5GHz more consistently than Snapdragon 600 based phones can run at 1.7/1.9GHz. 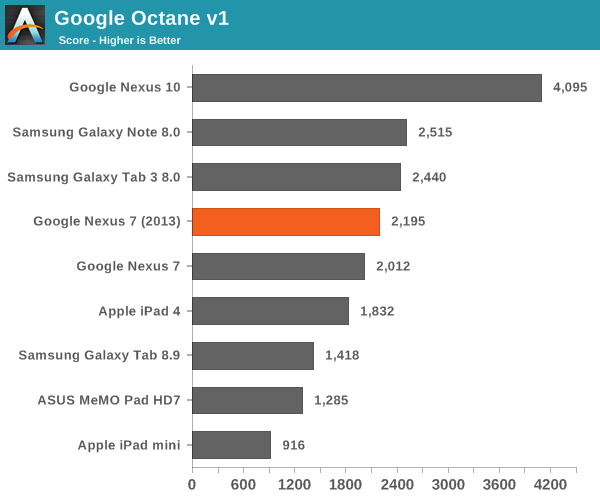 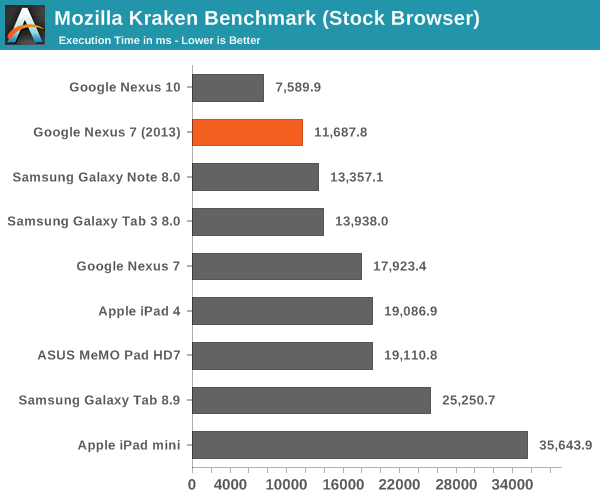 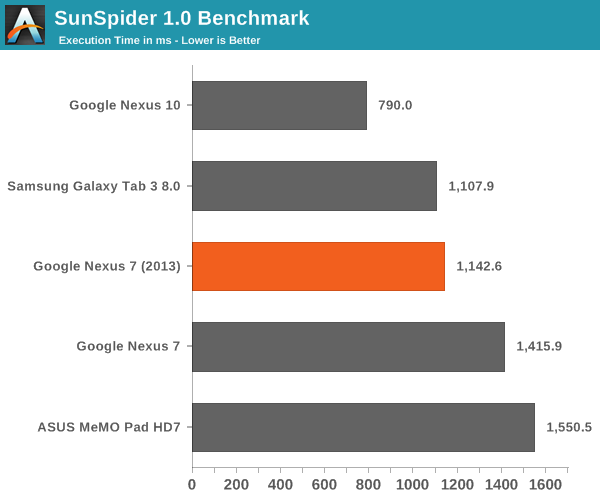 Qualcomm seems to be frequency binning here, which is standard industry practice. Using binning to create these different SKUs gives Qualcomm pricing flexibility and also gives it the option to give large customers special treatment.

On the graphics side Qualcomm's Adreno 320 GPU makes an appearance. Clock speeds are also limited to 400MHz, compared to 450MHz for the high-end Snapdragon 600 implementations we've seen.

The APQ8064-1AA's dual-channel memory controller is populated with four x 16-bit DDR3L-1600 memory devices, giving the Nexus 7 a healthy amount of memory bandwidth. Peak memory bandwidth available to the APQ8064-1AA is 12.8GB/s, equalling what's available to Apple's A5X in the 3rd generation iPad with Retina display. Tons of memory bandwidth is obviously a pre-requisite for driving a high resolution display, and the combination of DDR3L-1600 and the Adreno 320 GPU delivers a butter smooth UI in all well written Android apps. 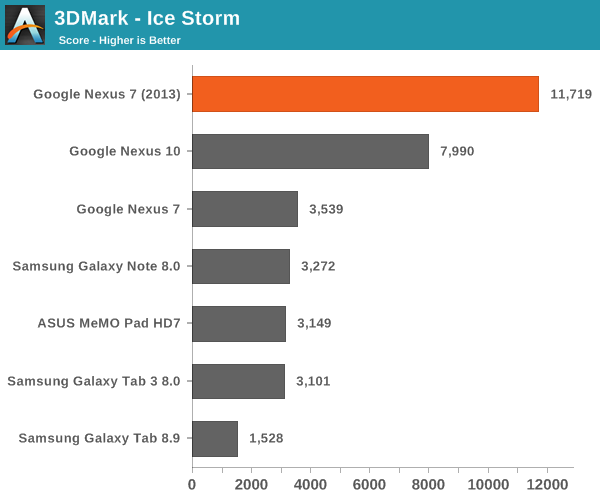 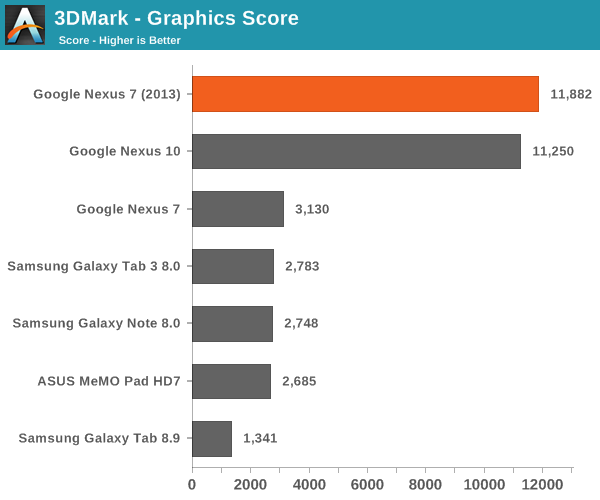 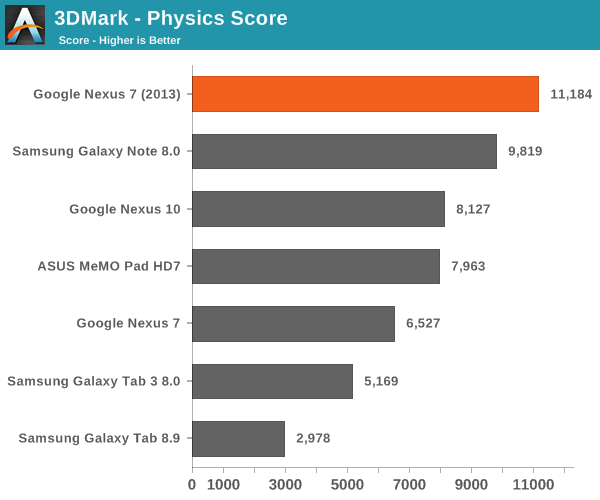 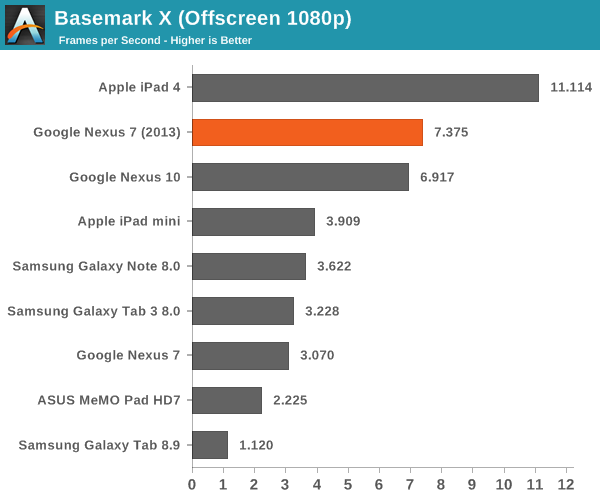 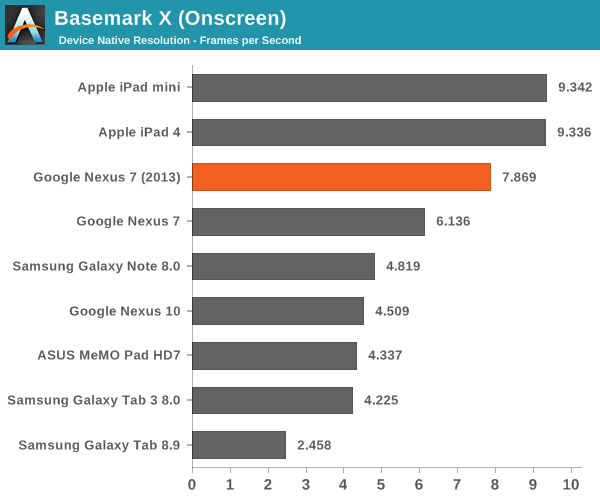 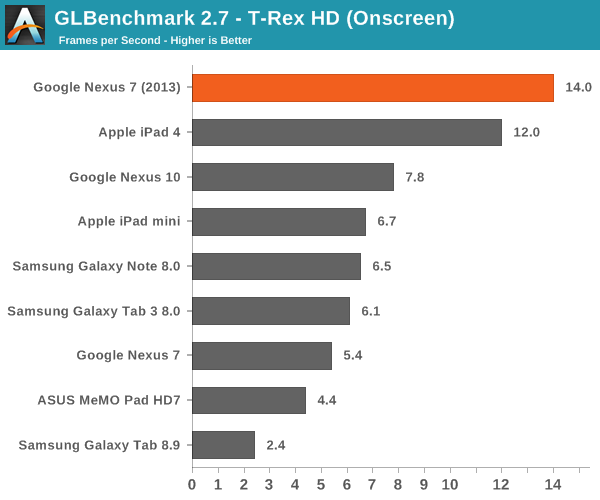 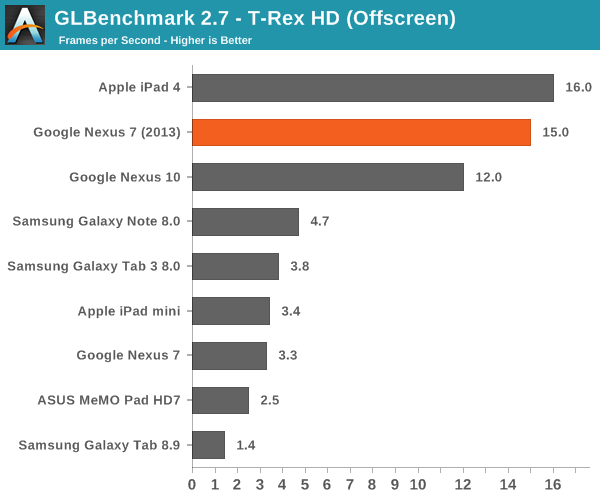 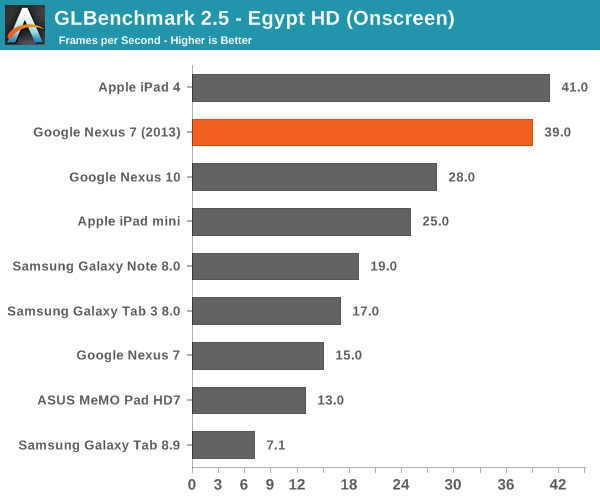 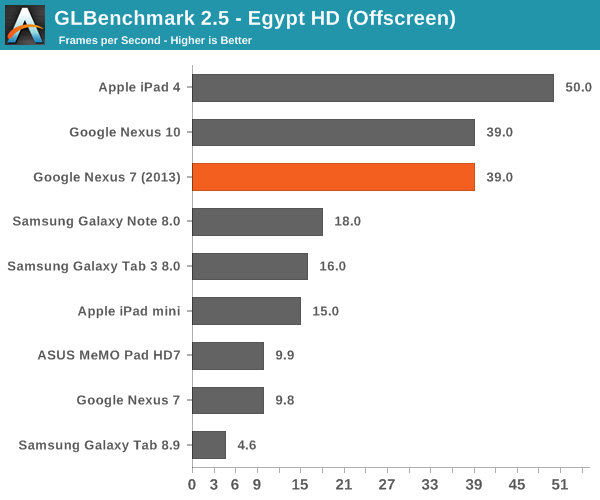 I played Modern Combat 4 as well as Shadowgun, both demanding 3D titles, on the new Nexus 7. Both titles appeared to render at the Nexus 7's native 1920 x 1200 resolution, and both appeared to do so at around 30 fps.