One of the perks of testing a case this small is that sometimes there's just so little you can actually do that the whole thing just kind of blows by. With the Lian Li PC-TU100, there's only so much that can be installed, even by our Mini-ITX testing standards.

Since there's really only one form factor supported by this case, motherboard standoffs come pre-installed in the frame. Popping in the I/O shield is a little trickier than usual due to the pliance of the aluminum Lian Li uses, but getting the board itself in was fairly simple. The case headers included by Lian Li are a little on the long side for a case this small, but they get the job done. Note that the intake fan is 3-pin and will need to be connected to the motherboard.

Mounting 2.5" drives involves inserting screws surrounded by rubber runners into the sides of the drives, then slotting them down into the drive trays. The friction caused by the rubber runners allows the drives to be held in surprisingly securely. This is pretty typical Lian Li, but it's also one place where their persistence in using this design pays off.

Expansion cards are a bit trickier for two reasons. There's a cover plate held on by two screws in the back of the case that just keeps the design looking clean, but will need to be removed. There's also the matter of clearance, though. Our GeForce GTX 560 Ti didn't fit in the PC-TU100. That 200mm clearance works out to about 7.8", making the most powerful card you can fit into the case the extra-short GTX 670 ASUS produces. Even then I'm not sure I'd go that far; the graphics card slot receives very little fresh air due to the way airflow is directed through the PC-TU100. Really what you want is a blower-style cooler, but the case isn't deep enough for one. You can fit a decent graphics card inside, but you'll have to choose with care. 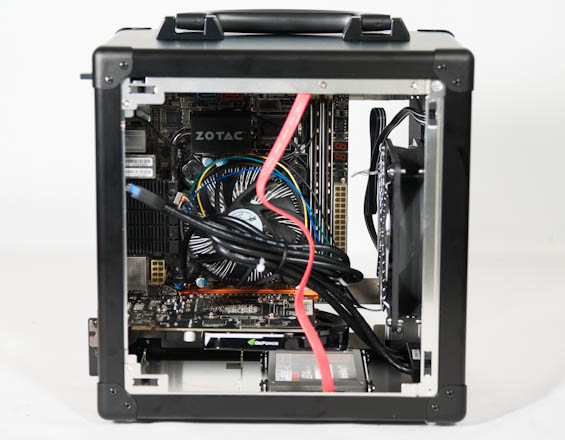 Finally, installing the power supply and getting everything wired is always going to be tricky, and that continues to be an issue here. It's really just a matter of space; cables inevitably get compressed between the power supply and the CPU cooler, and you have to be very careful to keep them out of the cooler's fan blades. Once you have everything in order, though, the case is pretty painless to snap shut again, and the doors themselves are nice and secure.

While it's not a total picnic, assembling the PC-TU100 is about as easy as it's going to get in this form factor barring the suggestions I made on the previous page. You'll see when we get to the test results, though, that any build using the PC-TU100 is going to need special attention paid to component choices. Anything more than a modest overclock won't be an option, and you should probably keep the wattage on the video card fairly low.