In-Win's GT1 gets to be the first benefactor of our shiny new testbed motherboard. Our old Z68 micro-ATX board ran into a serious problem: it wasn't splitting CPU PCIe lanes to the second PCIe x16 slot for SLI, which is the "next level" of testing. Even though I tried just as hard as I could to find another comically undersized board to install in our enthusiast cases, unfortunately I had to get a full ATX board that would be more representative of what users might build with. Rejoice, my year of spiting readers complaining about the micro-ATX board is over! (Actually, you guys were right. The added flexibility of using a micro-ATX board wasn't worth the downsides. Mea culpa.)

Because In-Win included motherboard standoffs effectively extruded from the motherboard tray, installing our new test board was actually a very simple affair. They do include additional standoffs if you're using a smaller board like the previous test board, though. Wiring the motherboard was also easy enough to do, but In-Win includes two power LED leads: one for three pin spaces, another for two, instead of just splitting the positive and negative leads. 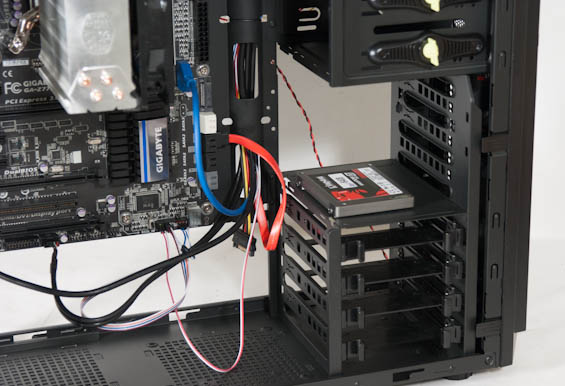 The toolless drive installation also went absolutely swimmingly. For 5.25" drives, the toolless clamp is secure and the bay shields themselves pop in and out easily enough without being frustratingly loose. 3.5" drives fit snugly into the trays; the trays themselves are a pretty sturdy plastic with exactly enough flex, and pins snap into the side screw holes of the drives. 2.5" drives can be bottom-mounted to the trays, but In-Win also includes two dedicated installation points for 2.5" drives. The second is in the bottom of the case, beneath the last drive tray, but the first is actually at the bottom of the top drive cage. There are two wedges that slot into the side screw holes of the 2.5" drive; you angle the drive in, then screw in the other side, and it's held into place securely. You do have to remove the left panel of the cage first, though; that's held in place by a single screw.

Mounting the power supply went easily enough, but when we get to the expansion cards we see another place where In-Win cut costs. The expansion slots are covered by perforated steel instead of actual slot covers, so once you pop 'em out, they're open for business forever unless you buy some aftermarket covers. The steel In-Win used for the case is actually pretty damn sturdy, too, and I was surprised at how much force I had to apply to eventually remove the covers. 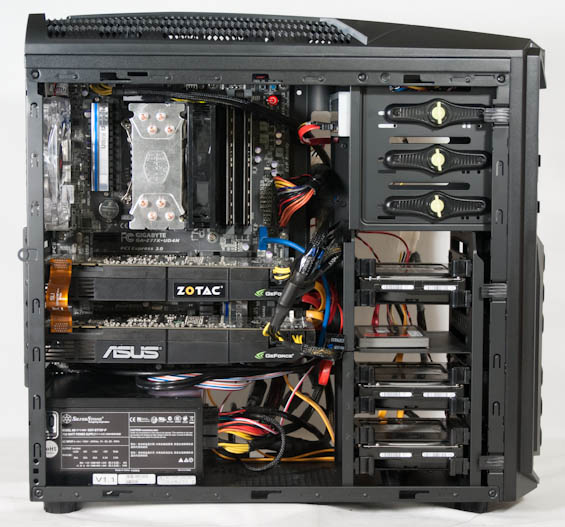 Where installing our testbed into the GT1 goes haywire, though, is the cabling. There are a couple of major problems going on here. First, there's no routing hole for the AUX 12V line, so you'll have to run it across the motherboard. Second, the routing holes that feed into a channel around the motherboard aren't just small, they're actually already mostly occupied by the case's leads. 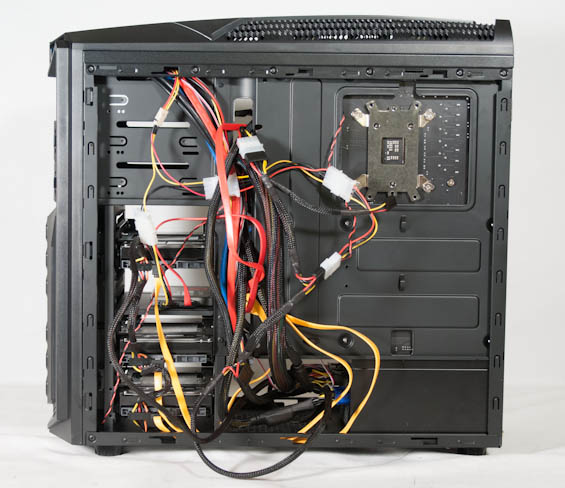 The third problem is the biggest, in my opinion. Our review unit came with all the fans and fan controller connected incorrectly. The fan controller used in the GT1 isn't like the ones I've seen in other cases; it's a single three-pin lead connected to a molex adapter, and if you plug the chain of fans into the wrong side of the sequence, all the fans just run at full speed. That's exactly how the GT1 shipped to me, and if it hadn't dawned on me after a deep and restful sleep to go back and recheck the connection order, this review would be missing an entire set of results and the fan controller declared bunk.

Putting together the GT1 was ultimately fairly easily, but was heavily marred by the cable routing issues and the incorrectly-assembled fan control. I will tell you that with both video cards installed (along with everything else), this case gets cramped in a hurry, but that's to be expected from a mid-tower.