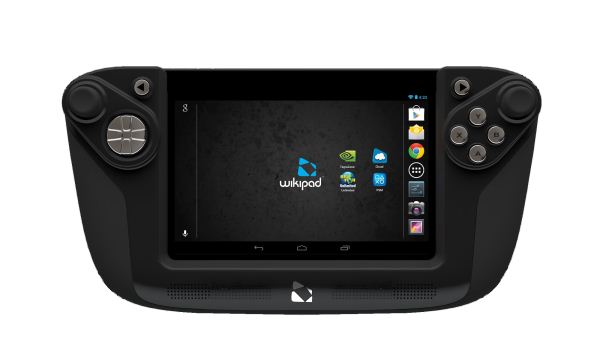 Gaming on Android has been a hot topic lately. Purpose built consoles and handhelds have been rolling out along with plenty of excellent games. The WikiPad, announced in 10-inch form previously, takes a middle ground. A 7-inch Tegra 3-powered tablet is paired with a handheld dock that features two analog sticks, directional pad, a quartet of front buttons, two shoulder buttons and two trigger buttons, along with a pair of speakers and a grippy, contoured design. The software side brings Jelly Bean along with NVIDIA's Tegra Zone, MadFinger's Dead Trigger and Shadowgun: Dead Zone and Distinctive Games' Hockey Nations Tournament. The WikiPad is also PlayStation Mobile Certified, giving it access to the handful of Sony's library of games that have been ported to the platform.

The tablet's specs bear a striking resemblance to Google's 7" tablet, and priced at $249 for the 16GB model it competes directly with the 32GB Nexus 7 or a 16GB Nexus 7 and a decent Bluetooth gamepad. No firm date for release was announced, and the 10-inch model is still in the works. That larger product had some manufacturing issues that presented a lengthy delay, and with the market moving smaller and cheaper the opportunity to bring out a smaller was too good to pass up. We'll see how thing work out come this Spring.