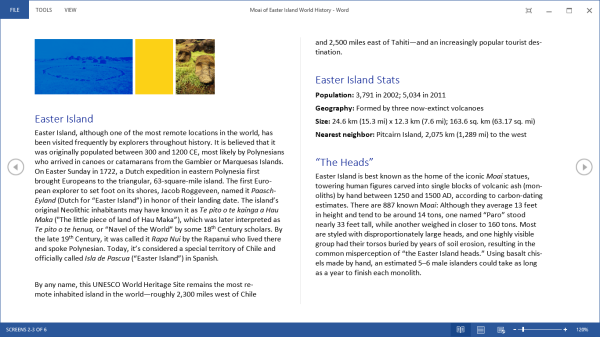 Word 2013 has a couple of nice features worth calling out. One is a viewing mode designed specifically for reading, which is pretty similar in theory to Reader mode in Safari, with text reflowing in columns to fit the display and all navigation and editing tools being hidden to present the document in a consumption-centric manner. The other is much better handling of PDFs - Word 2013 can now open PDFs and treat most content (text, tablets, formatting) exactly the same as standard Word docs. If you’ve ever had to deal with the nightmare of copying content from PDFs to Word, this is wonderful news. Unfortunately, now I’m done with college; it’s unfortunate that Microsoft didn’t decide to implement this in Word 2007 when it would have been legitimately useful to me. (Sidenote: perhaps this is a sign that I’m getting old, but I’ve had a number of moments in the first month of this year when I see new tech products and think to myself “Damn, I would have killed for that 5 years ago when I was an undergrad.”)

PowerPoint comes with significantly better audio and video media support, the ability to add pictures from online directly to the presentation instead of having to save and insert them, a new presenter view when you have a second screen (which is done automatically), more (and better) themes, some cool new transitions (in a category called “Exciting”), and better sharing and editing tools. 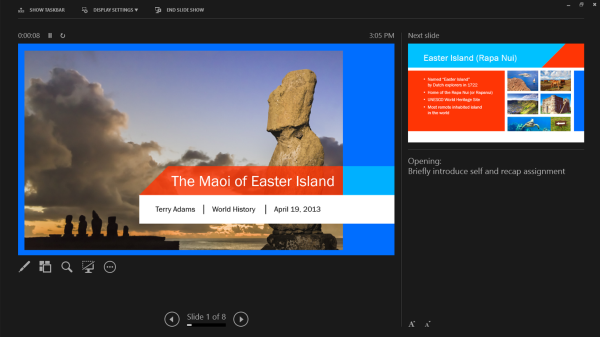 Excel’s improvements are primarily related to new charting options, but also a couple of new data tools. The new chart object styles are awesome, and the customizability of the data point styles and transparencies is much easier than it used to be. Other than new content and the visual refresh, the way you interact with the software hasn’t fundamentally changed much with the added features, which is why I’m kind of glossing over Excel and PowerPoint. They’re evolutionary improvements that don’t radically alter the user experience. 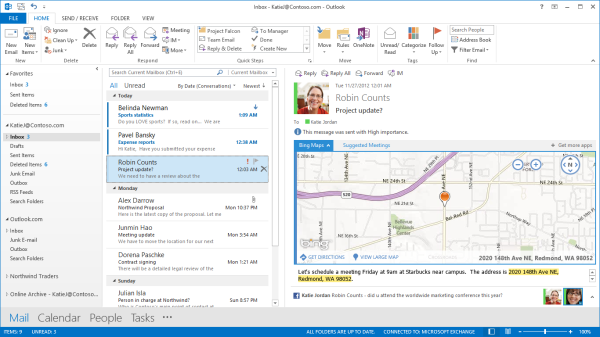 Outlook has been redesigned to look like a much more powerful version of the Windows 8 Mail application, with a colour scheme change from gold to blue. Inline replies are now the default, there are plenty of animations, and social networking integration is being touted as one of the more important new features. Clearly, this is not my father’s Outlook we’re talking about. It takes some of the better features from current mobile mail applications and integrates them into what was already the gold standard in desktop mail programs. There are new flyover boxes (called Peeks) to quickly show you schedule, calendar, or contact details without switching windows. The contact manager also does a better job of consolidating multiple contact details into a single card to reduce duplicates. Faster search, better filtering, and new views and in-line attachment and Bing map previews make the 2013 edition the sleekest and easiest version of Outlook yet. After using Outlook for a few days, going back to the Mail app is just a painful and torturous exercise.

With Office 2013, OneNote is making the jump from interesting and useful Office application to really being a vital component of the Office suite. With the rise of tablet computing and the touch-centric nature of Windows 8, this is understandable, particularly since most of the Intel-based tablets are coming with Wacom, N-Trig, or other active (pen-input) digitizers and even the Windows RT slates work well when paired with capacitive styli. That most Windows RT slates don’t come with capacitive pens out of the box is a failing of the device manufacturers, since the platform really lends itself to pen input. 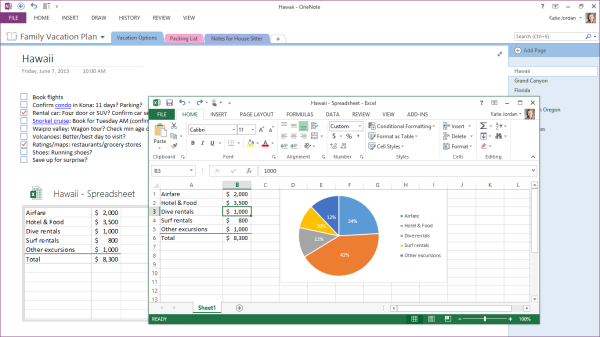 OneNote 2013 features a lot of cross platform integration, with easily embedded objects and Office files (which automatically update when changed). So, if I was to put an Excel grocery list file into OneNote, any changes I made to it in Excel would be reflected in OneNote as well. Outlook meeting integration gives OneNote much more scope in the business realm than it previously had, particularly when combined with the improved search and linked audio features. Better inking, photo snipping, auto-save, and a full-page reading view just improve what OneNote was already great for.