Windows and Office. It’s a duo that has made up the core of Microsoft’s business since before I was born, and remains the cornerstone upon which the rest of the company is built. And so it has gone, for as long as I can remember: with each new version of Windows, a refreshed edition of Office to go along with it.

This year, we’ve got Office 2013. We’ve obviously had some experience with it in Windows RT form, and I spent a fair amount of time using the Office 15 Consumer Preview last year (in fact, I wrote my Masters thesis in Word 2013 Preview). In the grand scheme of things, it’s a pretty major change, with the biggest probably being the move towards a subscription-based model, though you can still buy Office in a traditional retail boxed edition with a standalone license. There are four different options for the standalone version of Office 2013: Home & Student (Word, Excel, PowerPoint, OneNote, $139.99), Home & Business (adds Outlook, $219.99), Professional (adds Publisher and Access, $399.99), and a volume-channel only Professional Plus with InfoPath and Lync for large businesses.

The interesting part is Office 365, which involves paying on a yearly basis for multi-device licensing and cloud storage. It’s worth clarifying the naming scheme here: Office 2013 refers to the latest version of the Office suite, while Office 365 refers to a subscription service that provides Office 2013 applications. Office 365 Home Premium and Office 365 University both come with the same set of programs (Word, Excel, PowerPoint, OneNote, Outlook, Publisher, Access) along with 20GB of SkyDrive storage, 60 Skype minutes, and multiple device installations (5 for 365HP, 2 for 365U). It’s a pretty sleek system, with all of Microsoft’s cloud services leveraged to provide a seamless experience. Obviously, this isn’t the first time we’re seeing cloud-based document storage and backup, but the SkyDrive integration in Office 365 is much deeper than we’ve seen in the past. 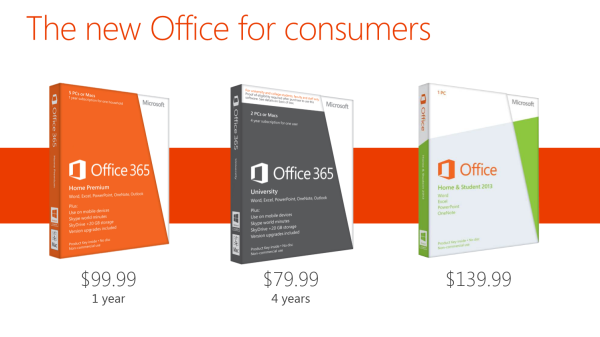 Now, with a subscription model, pricing is obviously key. I think Home Premium’s yearly $99.99 fee is a bit ambitious, but the University edition at $79.99 for four years is actually a pretty great deal. The only downer with 365U is that it only has support for two device installs, as opposed to five with Home Premium, but that’s the price you pay for getting an 80% discount. A university ID is, naturally, required at the time of purchase. (Thank god that most of my friends are still undergrads.)

Let’s focus on Home Premium for now, as it’s the version that we’re testing and also the most relevant consumer product in the entire Office 2013/365 lineup. At $99/year, it offers a lot of value if you’re planning on using it on 4-5 devices, but if you’re only putting it on one or two devices, that sounds a bit steep. If it were in the $50-80 per year range with two or three licenses included and additional device installs available for $10 each or so, that’d be much easier. This also eliminates the problem for users wanting to install it on more than 5 computers. As presently constituted, to get more than 5 device installs, you need to buy another Office 365 subscription using a different Microsoft ID. With a typical family of four, it’s not even that difficult to think of having more than 5 computers, even if my occupation makes my household collection of computers a bit of an exception. Basically, it’d be nice to see a bit more flexibility in the plan with regards to the number of licenses available, along with this being reflected in the pricing scheme.

Setup is painless, with a simple executable (or .dmg for Mac installs) downloaded after creating or signing in with a Microsoft ID and entering your serial number. There is no DVD-based install, that has been retired in favor of purely digital distribution. The awesome thing here is that you can start using Office applications almost immediately, with many of the installation tasks being pushed to the background. Compared to the lengthy Office installs of old, this is a vast improvement.