Over the past couple of weeks I've received emails and tweets asking me to look into GPS performance issues with ASUS' Eee Pad Transformer Prime. By the time I got around to doing so, ASUS had already acted. ASUS removed GPS support from the Prime's spec sheet and made a public statement about it. We didn't have a ton of time during our initial review of the Eee Pad Transformer Prime, but we had more than enough time between then and our follow-up to address the GPS issues before shipments ever reached customers. Why didn't we say anything until now? Because I forgot to test GPS reception performance on the Prime.
It's not an easy thing to admit because we do spend a lot of time reviewing these devices, but GPS reception is something I missed. I was so focused on power consumption and the WiFi issues that thinking to test GPS on the Prime simply slipped my mind. Had I tested it originally we could have brought the problem to light sooner and perhaps saved everyone a lot of trouble. This is the perfect example of why we spend so much time testing nearly everything we review. Without thorough testing issues like this can go by unnoticed and the customers are the ones who end up suffering. If you read our review, bought a Transformer Prime and were frustrated by the GPS performance of the tablet, I do apologize. This is something I should have tested sooner. I can't promise we'll always catch everything, but we do try our best to catch as much as possible and we'll continue to do so in the future.
I don't believe the GPS issues on the Prime are substantial enough to warrant changing our recommendation for the product, but I have updated our review with a warning to those users who are planning on using the Prime as a GPS receiver.
Mistakes are easily made and aren't easily rectified. What follows is the explanation and analysis of the GPS performance on the Transformer Prime that should've been published weeks ago.

ASUS recently released an update that addresses GPS lock performance, however it only ensures that ephemeris (used to calculate satellite position) and almanac (details for all GPS satellites) data are downloaded over WiFi to speed up the process of determining your current position. Without network assistance, this data would have to be received from the satellites themselves at an extremely low transfer rate (50 bits per second in ideal conditions). This update does not fundamentally address the issue of GPS reception, nor is it possible to address that in software - it's a limitation of the Prime's design.
GPS signals are transmitted as high frequency radio waves (~1.5GHz for most client GPSes) from a number of orbital satellites high above the earth's surface (~20K km). GPS satellites broadcast accurate time and orbital positioning information for themselves and other satellites in the system. GPS receivers on the ground can then calculate the receiver's location using this data from a minimum of four visible satellites. More accurate location calculation is possible with more satellites but four is generally the minimum.
The data needed from the satellites isn't very large, but it's transmitted very slowly and via RF over a great distance. As we've mentioned in earlier posts, radio waves don't pass through conductors that block their path. Though stylish, aluminum enclosures are very good at blocking radio waves. 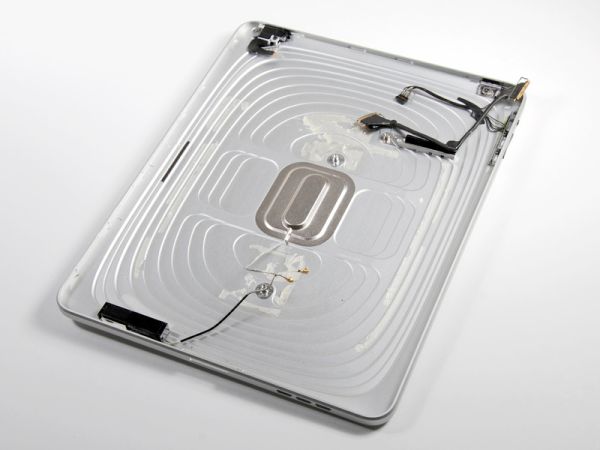 WiFi antenna in the original iPad - Image Courtesy of iFixit

Apple obviously had to deal with this problem in the past. The original iPad and the iPad 2 are both made of aluminum, and both at a minimum have Bluetooth and WiFi antennas to deal with. The original iPad placed the WiFi antenna behind the plastic Apple logo on the rear of the tablet. Radio waves easily travel through plastic and the logo is a permanent fixture on Apple products so the design decision made sense. The iPad 2 relocates the WiFi antenna, presumably to shave precious millimeters of thickness from the center of the tablet to the bottom corner near the dock connector. Instead of a plastic RF window there's the perforated aluminum speaker grill. This isn't as desirable of a location as behind plastic, resulting in worse WiFi range out of the new iPad compared to its predecessor, but it's better than putting the antenna behind solid aluminum. 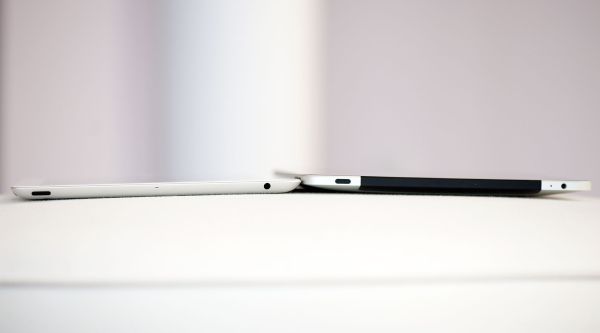 The 3G models of the iPad/iPad 2 have always included a black plastic strip behind which the cellular and GPS antennas reside. The 3G models needed this design concession in order to deliver decent cellular reception.
ASUS built the Eee Pad Transformer Prime out of aluminum, similar to the iPad/iPad 2. This departure from the original plastic Eee Pad Transformer was welcome, but brought with it the same sort of antenna challenges that Apple has had to face.
Being thinner than the iPad 2, the TF Prime presumably doesn't have the thickness to accommodate a WiFi antenna mounted in the middle of the chassis behind an RF window. Furthermore, ASUS didn't provide any such window to begin with making this point moot. There is a speaker grill similar to the one Apple included in the iPad 2, however ASUS didn't choose to locate the WiFi antenna here.
Instead ASUS included a pair of WiFi antennas (implementing antenna diversity) on either side of the front facing camera. WiFi range isn't as good as the all-plastic Transformer, but functional antenna diversity did make best case performance virtually identical in our tests.
The GPS antenna is located between the two WiFi antennas - left justified so it's closer to the main antenna. GPS in the Eee Pad Transformer is actually driven by the same Broadcom BCM4751 GPS receiver Apple used in the GSM iPad 2 and the original Eee Pad Transformer: 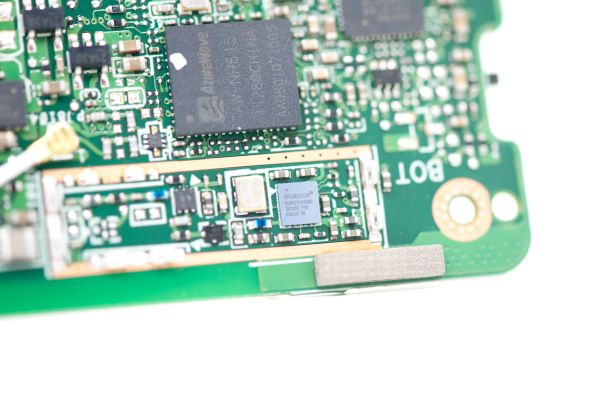 Despite having the same base hardware however, GPS performance is much worse on the Prime. Let's start with the best case scenario, outdoors, fairly clear skies with nothing overhead. The Transformer and Transformer Prime are side by side and we fire up GPS Test. The original Transformer determines its physical location almost immediately, the Prime is able to do so only after a period of 18 seconds. The GPS Test output from both tablets is below (ignore the time differences, the timezone on the Prime wasn't properly set): 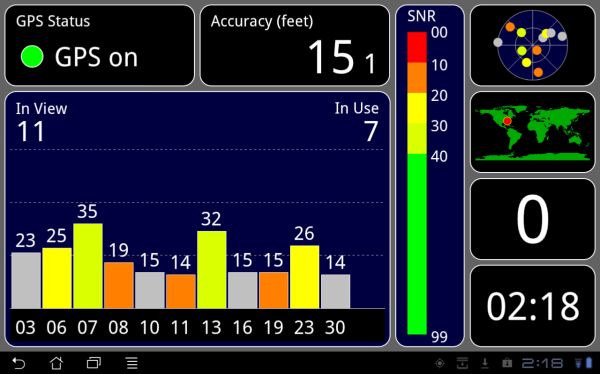 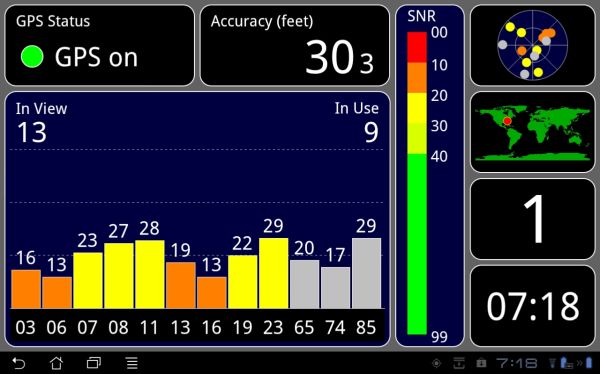 The Prime is actually able to see more GPS satellites, but the average signal to noise ratio on the Prime is much worse than on the OG Transformer. The Prime attempts to use more GPS satellites fairly consistently, but just as consistently the Prime delivers lower positional accuracy.
Note that the screenshots above are among the worst results for the OG Transformer in this first test. If we look at the best results we see a much bigger gap between the two: 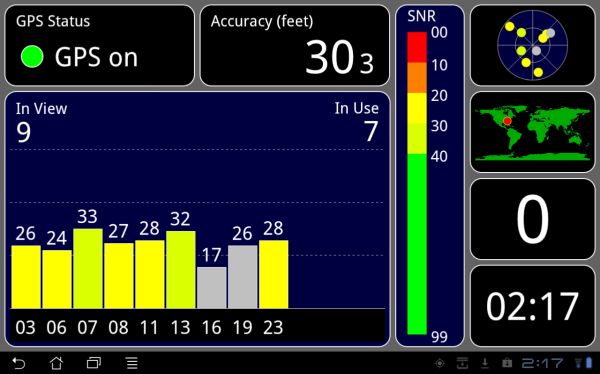 Our next test is the worst case scenario for either tablet: indoors. Both tablets are positioned inside a two-story house five feet away from an outside-facing wall with windows. This isn't a very realistic test but it does provide one of the most difficult environments for GPS reception.
Here the Prime never gets a lock. At best it sees a single satellite but it quickly disappears. The OG Transformer on the other hand sees reduced performance but it does obtain a lock: 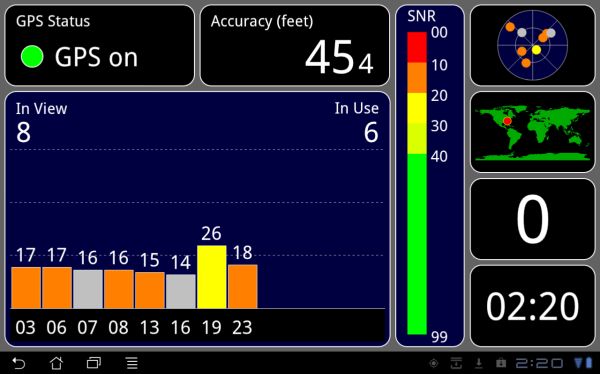 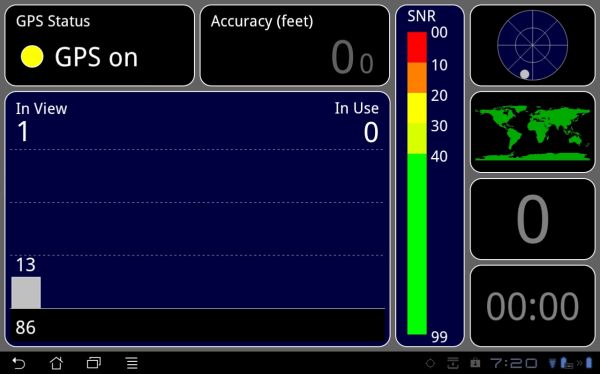 Our final test is in a vehicle with both tablets connected to a WiFi hotspot on an iPhone 4S. This is one of the most realistic scenarios where you'd actually use the GPS functionality of a tablet.
Here the Transformer Prime took 64 seconds to determine its position via GPS. The OG Transformer did so in less than 10 seconds. Both accuracy and SNR are worse on the Transformer Prime. 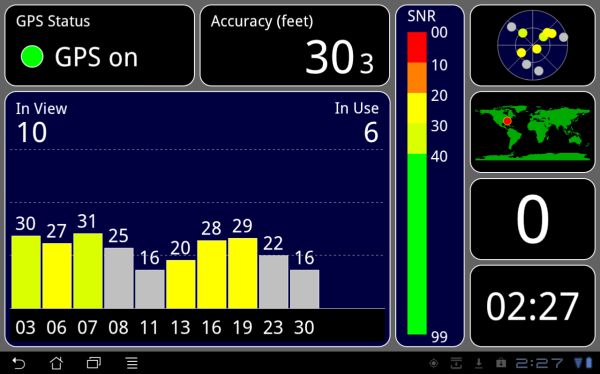 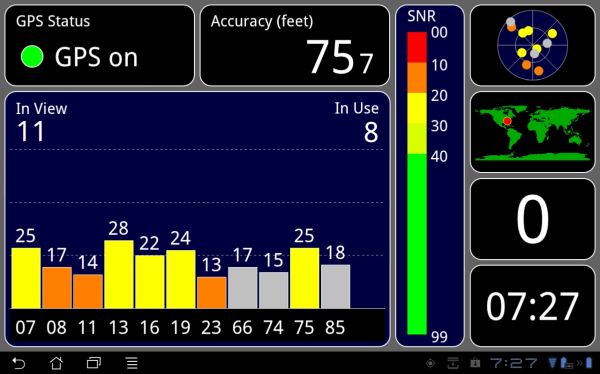 Depending on the environmental conditions the Transformer Prime's GPS reception can range from slightly worse than the original Transformer to completely unusable. This is a side effect of the Prime's aluminum construction. For whatever reason ASUS decided against including a plastic RF "window" in the Prime's design that would have improved GPS reception without sacrificing the majority of the tablet's aluminum construction. If I had to guess, I'd say ASUS probably didn't view GPS reception as a significant enough feature of the Transformer Prime to warrant a design change to improve its performance. It's also worth noting that the Prime's target design competitor, the iPad 2, doesn't offer GPS support in the WiFi version. It's only in the 3G models that GPS is offered.
ASUS' resolution to the poor GPS performance of the Prime was honestly the best course of action it could have taken. Quickly redesigning the Prime to improve GPS reception isn't realistic. ASUS owned up to the problem and admitted the design impedes GPS performance. ASUS took further action by removing GPS from the list of supported features of the Transformer Prime so at least going forward customers won't be misled. The only thing that ASUS didn't do was offer a return/exchange program for those users who felt they were misled by ASUS' initially advertised specs. However, given the first shipments of the Prime went out less than 30 days ago, customers should be within their return windows for the time being.
There are obvious benefits to an all aluminum device construction, however it does present some interesting technical challenges when it comes to wireless interfaces. I have to say that Apple's solution in this case (a plastic RF window) makes a lot of sense and I hope to see something similar used in future ASUS designs.
Tweet
PRINT THIS ARTICLE
Comments Locked