The WiFi Galaxy Tab 10.1's model number is GT-P7100. The 4G version is the SCH-I905. Both run Android 3.1 however the most recent update to the GT-P7100 that enabled TouchWiz isn't available for the SCH-I905 yet. The delayed update is likely due to additional testing that Verizon does on all software updates for devices on its network. Unfortunately this is a downside to any tablet operating on a cellular network, carrier testing doesn't seem to be the most efficient process in the world.

LTE in Honeycomb isn't all that different from EVDO. Instead of a 3G indicator you obviously get a 4G label in the corner of the screen:

There's no quick toggle between 3G and 4G similar to what you'd find on a smartphone. To force EVDO you have to go into Wireless & Networks, Mobile networks, System selection and finally select CDMA mode instead of LTE automatic: 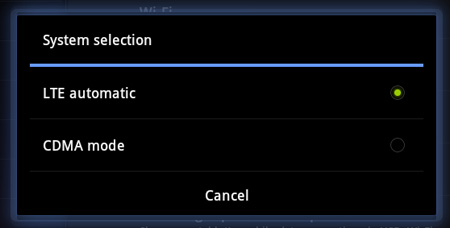 Not being able to quickly turn off LTE is less of an issue on the Galaxy Tab 10.1 because of its gigantic battery. At nearly 26Whr you've got around 5x the battery capacity of an LTE phone. We'll get to that shortly. First let's look at the sort of speeds you can expect from the Galaxy Tab 10.1 on Verizon's LTE network.

To start, I did a simple timed loading test of the AnandTech.com front page on LTE, EVDO as well as my home cable internet connection via WiFi. I cleared the browser's cache before each set of runs and ran the test 5 times on each network. An average of the results are below: 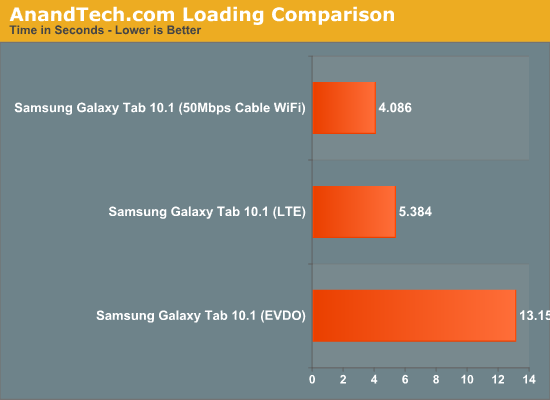 With a good enough backbone, WiFi can still obviously be faster than LTE on the Tab. The margin of victory is pretty slim though, and I'd guess the majority of WiFi networks you connect to on the go won't deliver 50Mbps of bandwidth downstream. The advantage over EVDO is not only noticeable, but huge.

I packed the Galaxy Tab 10.1 with me for drive tests around Raleigh, NC. Verizon flipped the switch on LTE in my area at the end of July and performance has been quite good since then. The histogram of my download tests is below: 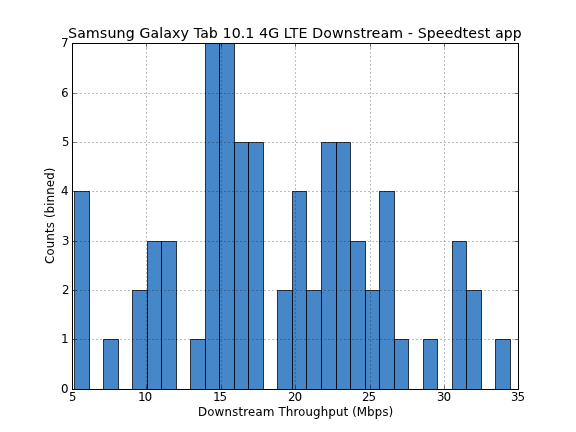 Performance peaked at 35Mbps and it went as low as 5Mbps. Most of the tests fell within the 15 - 25Mbps range. Downstream performance was almost binary in my office: I'd either get 12Mbps or 25Mbps down, in the same physical location. 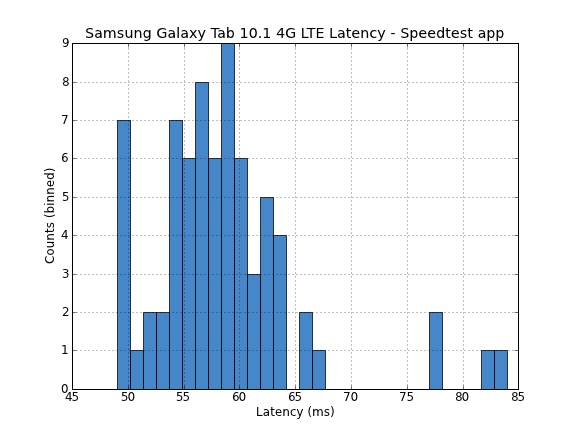 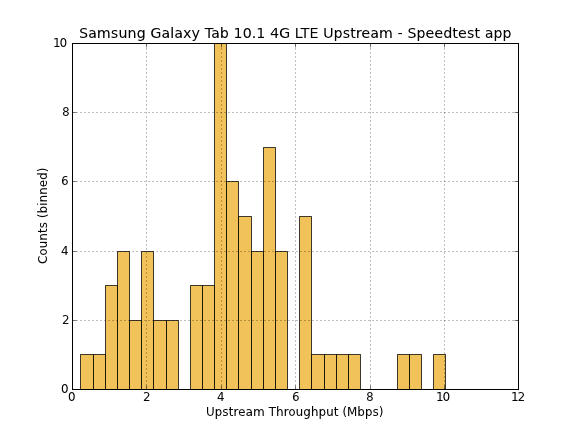 Upstream performance was also very good. Peak upstream speed topped out at 10Mbps, while typical speeds were closer to 5Mbps.

Brian Klug went over LTE in depth in our launch articles on the topic. I don't have too much to add but in using the Galaxy Tab 10.1 on Verizon's 4G network here are some thoughts:

1) Performance is amazing. It's like having great WiFi access anywhere you go. In fact, prior to Time Warner's DOCSIS 3 upgrade in my area, Verizon's LTE network is faster than what I used to be able to get over cable.
The tablet hardware itself doesn't appear to be limiting performance here. I got similar speeds over a standalone LTE MiFi as I did via the Galaxy Tab 10.1.

2) There's no penalty to using it as a hotspot either, performance remained the same whether I was on the tablet or on a notebook tethered to the tablet.

3) The 700MHz frequency helps signal propagation in a major way. Other than an all-concrete room in my basement I got great speeds regardless of where I was in my house.

4) Occasionally the Galaxy Tab 10.1 would act like it had no network connectivity, despite being in an area with great signal strength. This happened twice, once while using the tablet and once while using it as a hotspot. Disabling then re-enabling wireless connectivity (or the hotspot) fixed the problem in both situations.