Getting to Know the Colossus

When Hauppauge introduced the original HD PVR in 2008 its component plus TOSLINK (optical S/PDIF) capture of 5.1 Dolby Digital and up to 1080i analog video was a revolutionary, and long overdue, shift for the home theater PC (HTPC) based digital video recorder (DVR). Finally there was a viable option for recording DRM-free high definition (HD) content. The device was far from perfect however, suffering from stability (I RMA’d four personally); furthermore, as a large external USB device, it didn’t provide the most appealing form factor for many installations. Today we’re looking at Hauppauge’s second iteration of the HD PVR concept, this time as a standard height PCIe x1 device dubbed Colossus. It offers all of the previous capture options while adding HDMI input to the feature list.

The single slot, full height PCIe x1 card has a simple layout with all of the components exposed. There is not much to point out besides the lack of any cooling on the ViXS encoding chip and the presence of Hauppauge’s standard analog connection header along the top. To utilize the auxiliary inputs a daughter card (not included with the Colossus) is required. I have one in the parts bin so it was possible to test the feature, which adds s-video and a second composite/stereo capture option to the options provided directly on the device.

Looking at the native inputs we find HDMI, two breakout connectors for component (YPbPr) / stereo audio, two TOSLINK (optical S/PDIF), and a port to attach the infrared (IR) receiver/blaster. The top breakout/TOSLINK combo provides input and the bottom output for audio/video pass through anytime the PC is powered including standby (S3), hibernate (S4) and soft-off (S5) states. HDMI is the most interesting not only because it is new, but because of the usage scenarios it could enable were the full capabilities of the connection provided. Unfortunately (and understandably due to legal and licensing issues), this is not the case; instead, the HDMI input provides the same feature set as component plus TOSLINK (up to 1080i and Dolby Digital support). Most important, there’s no support for High-bandwidth Digital Content Protection (HDCP), so HDMI capture will not work with devices that require it.

In practice, the HDMI link did record most channels/programs from the cable STB (Set-Top Box), but it was not 100% reliable as some files had no audio or video—I assume because HDCP was active in those cases. I did not notice a significant difference between HDMI and component output from the RNG 110 (using Comcast in Chicago), but results will vary between STB and providers so it is worth an attempt if the box has an HDMI output, because the streams will skip a digital to analog conversion. 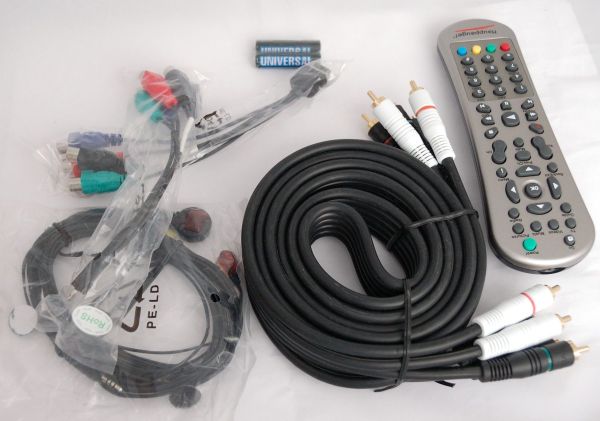 There’s plenty in the package besides the card; you get a remote with IR hardware and batteries, two breakout dongles, analog audio/video cables, a driver CD (not shown), and some “value-add” software including a copy of Arcsoft ShowBiz. One of the applications Hauppauge provides with the Colossus is a system tray application that drives the IR receiver and blaster, but compatibly with other software products is very limited for the remote and changing channels with the included device is very clunky. Only one blaster is supported per PC, there’s limited set top box compatibility (none of the Pace profiles worked with the RNG110 used in this evaluation), and we experienced general stability issues both with the system tray executable and IR blasting in general.

All of this led us to a cursory evaluation of the remote. For those using this—or any STB based capture device—options like FireWire, serial, or Ethernet based channel changing are much better options. I would prefer an OEM/bare version of the card with just the dongles for those planning to use it with SageTV (or when drivers are available, Windows Media Center), passing the savings for unnecessary hardware and software to end users. The current package starts at $139 online, so removing the frills should get the Colossus down to $100 or less.