The Patriot Box Office Review: A Portent of Great Things to Come

For me, the holy grail for this type of box is to be able to stream the full uncompressed video and audio from a Blu-ray movie. I have a vast DVD and a growing blu-ray collection as I imagine many home theater enthusiasts do. The amount of storage needed to house these movies cannot be found on a single 2.5” drive, nor on an external USB drive. With that in mind, I decided to look at files in a few different formats and bitrates to see what the maximum bitrate was I could play over each type of connection supported by the Patriot Box Office (Wirelss, Wired 10/100, USB and SATA).

I started by producing an .mkv of The Dark Knight including the unaltered VC-1 (a Microsoft developed WM9 derivative) movie and Dolby digital core audio only. I also made an .mkv of Zombieland containing only the untouched AVCHD video which is a high def H.264 encode and the DTS core audio. These will be my highest quality videos, weighing in with an average bitrate of around 26 Mbps. I now have two .mkv files containing the two most common Blu-ray video types and core audio types. From here, I encoded these into smaller files and tested to see where the video playback began to stutter based on connection type to the Patriot Box Office. During the encoding I used .avi, mpeg2, m2ts, and WM9 formats.

Before testing these files I also attempted playing back a small .m4v file from iTunes and a few .vob DVD rips, as well as music from my mp3 collection and looking at jpeg, .png, and .bmp files from my camera. All files types were streamed over wireless and played without difficulty. Even both my high end .mkv files and subsequent encodes were recognized and displayed on my TV. The Patriot Box Office did, as advertised, play back everything I threw at it, and with impressive picture quality, although not always without issues as I will discuss in the next section. Below is a picture of the full bitrate Dark Knight .mkv played off my external USB drive. Nice! 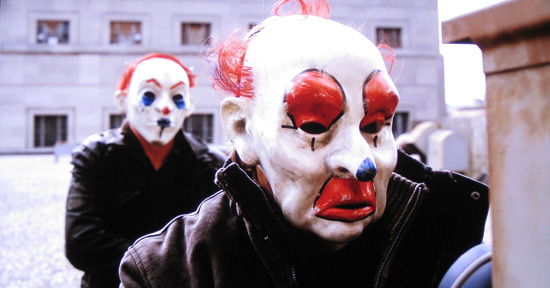 Over the wireless G connection I maxed out at an 8.5 Mbps file before the video playback began to stutter. It even stutters a slight bit during .vob playback of ripped DVDs. That's not the most encouraging result. I was only able to pass 30% of the bitrate needed to play back a full Blu-ray movie. Your mileage may vary depending on the state of your wireless network. In this case the Box Office was a mere 5 feet away from the D-Link DIR-825 access point.

As long as both my source PC and the Box Office were on wired ethernet I could play full bitrate Blu-ray on the Box Office over the network. However with my PC on wireless in the other room I noticed some stuttering. Given the high bitrates of most 1080p content you'll want to consider how robust your wireless setup is before relying on it for any sort of HD streaming.

Over a USB external HDD or an internal HDD all files played without stutter. I also tried playing back an .iso of The Dark Knight and was rewarded with seamless playback by the Box Office. Not that the .iso has a higher bitrate, it should be the same as the .mkv I made, I just wanted to ensure an .iso would be recognized for those who like their Blu-ray rips complete with all the extras. Switching the audio track during .iso playback with the remote to the True-HD track gave an Unknown Format message. But it was easy to switch between audio formats and subtitles with the included remote. That March firmware update adding hi-def audio support would add even more value to this device.

So this device will stream my music, videos, pictures and standard def movies over the network, as well as 720p encodes of Blu-rays for $100. It will even play the uncompressed Blu-ray movies if I put them on the device’s hard drive or on an external USB drive. What else could I want? What about the ever growing area of internet based media content you say? Is there any help there?

It does support a bittorrent client which allows you to download torrents to the local (internal) HDD of the Box Office only. You’ll have to add the seed via PC, similar to the function of NAS bittorrent solutions. It also supports UPnP, which can be used with programs like TVersity to stream content from Hulu or Youtube onto the Box Office, which is great. Again, you’ll need a PC to set up the media server. This whole process can take a bit of tweaking to get working, but it can be done. In testing out the UPnP it can take a bit of time for TVersity to prepare some of the Hulu queue files for playback, making watching internet based content feel quite sluggish.