Unlike the Falcon transition, the move to Jasper isn't very clean cut. You can't rely on a lot number or manufacturing date to tell you whether or not you've got a Jasper, there are some hints and only one sure-fire way to determine if you're holding a box with a Jasper inside without actually opening the packaging.

The hints are pretty basic: the Xbox 360 Arcade bundles appear to be the best chance at getting a Jasper right now, although there have been reports of some Xbox 360 Pro systems featuring Jasper. As of now there haven't been any confirmed Elites that have the Jasper boards in them. Remember that Jasper is not only a potential fix for the RRoD, but is also a cost reduction for Microsoft - the GPU die is smaller and the power supply is less powerful, which means lower overall costs - something that makes the most sense in the most price constrained of the three Xbox 360s available today: the $199 Arcade.

The first thing you'll want to do is look at the sticker on the outside of the box, this will have the lot number, team and some other potentially useful information. The lot numbers you're looking for are 0842X or newer, although unlike Falcon-hunting, the lot number won't guarantee you a Jasper. The lot number refers to the year and week that the console was built, 08 being the year, 42 being the 42nd week of the year. The X is there for, well, good luck I guess. The team isn't as important as it was in the Falcon days either, Xbox 360 Arcade bundles marked lot 0842X from team CSON and FDOU have been both Jasper or Falcons. 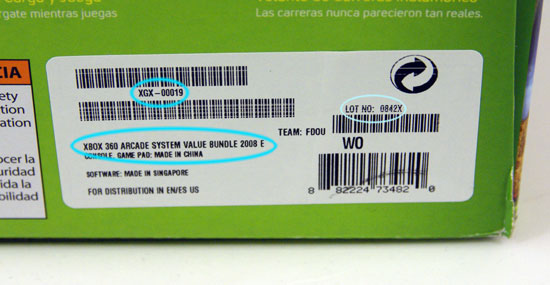 If you can't rely on the lot number and manufacturing team, then what can you? The sticker on the side of the box holds the first clues, while you can find the lot number here that's just a quick way of determining the likelihood of you having found a Jasper (e.g. if your lot number is really old, like 0830 then it's not a Jasper). There are two lines that right now appear to be good indications that you may have found a Jasper, I've highlighted them in the picture below:

If you see this XGX-00019 line below the top barcode, chances are that you've got a Jasper. And if you see this Xbox 360 Arcade System Value Bundle 2008 E line (exactly like that, note that this only applies to Arcade units) then you most likely have a Jasper as well. If you want full confirmation though you'll need to look at the current rating on the 12V rail which, believe it or not, you can do without ever opening the box.

Microsoft cut out a little window in the Xbox 360 packaging to allow the barcode/serial number to be scanned. Looking through this window the information you want is most likely obstructed by the cardboard cutout and it's to the left of the opening. The least destructive way to get access to this information is to push down on the Xbox 360 itself through the window on the right side, which will hopefully reveal the information you're looking for. A quicker, easier and potentially get-you-kicked-out-of-the-store way is to push the cardboard itself to the left a bit, possibly even tearing it slightly, to reveal the text you're interested in. The line you're looking for is this: 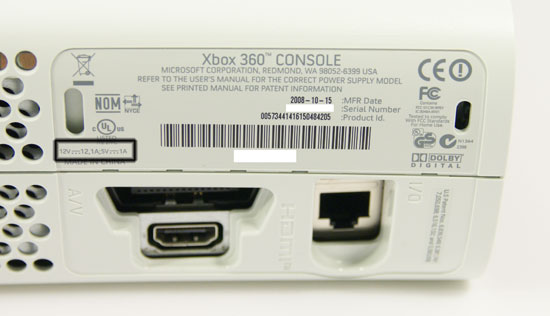 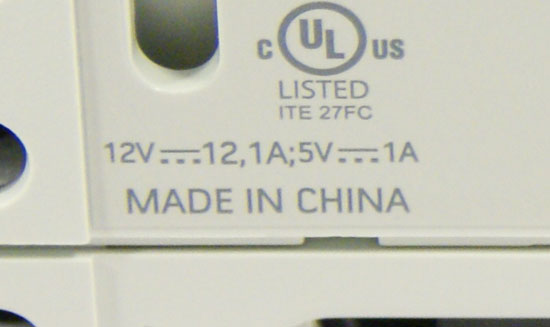 Now some Jaspers have been mislabeled as 14,2A, but no Zephyr or Falcon has been mislabeled as 12,1A. The explanation is simple, this rating indicates what sort of power supply you'll need to use with the machine. Zephyr and Falcon boxes can't run with only 12.1A on the 12V rail, you'd end up with a box that either crashed a lot, rebooted or had other undesirable behavior (assuming it would even start, assuming you could even find a power supply that you could plug into it). There's only one Xbox 360 power supply that can deliver a max of 12.1A on the 12V rail, that is the 150W power supply that is keyed to only work on Jaspers. Find a machine with 12,1A written on the back of it and you've got yourself a Jasper.

In my Jasper hunting I came across a strange beast, I found an Xbox 360 Pro with lot number 0843X. I figured it was new enough that it could be a Jasper, but looking at the 12V current rating I found that it was a 16.5A unit. I thought perhaps it was mislabeled and I'd heard about some newer systems having a 16.5A 12V rating, so I thought I'd buy it and take a closer look.

Once I got it home I confirmed: the machine was a Zephyr, that's the original Xbox 360 hardware with HDMI support, meaning a 90nm CPU, 90nm GPU and 90nm eDRAM - the very configuration most likely to Red Ring. I'm guessing it's a reworked Xbox 360 that never made it out of the factory in the first place due to an instant failure; something Microsoft fixed and sent out at a much later date.

Even if you don't care about getting a Jasper, it may be worth looking into what it is you are getting to make sure that you're not stuck with a box that's more likely to fail.