I’ve gotten a few requests to look at the improvement in battery life caused by Apple’s iPhone 2.1 firmware update, I had some spare time between articles so I ran a few tests.

There were issues on some 3G enabled iPhones that apparently caused a lot of dropped calls and general unpleasantness when trying to use your new phone. I never experienced any of them personally so I can’t really complain about them, other than to say that it made others unhappy.

The 2.0 and later firmwares apparently fixed many of the source issues behind these problems, and the most recent firmware update (2.1) supposedly increased battery life. I just happened to apply that update before heading out of the house for the entirety of the day and most of the evening, so I got a reasonable chance to try it out.

My phone was nearly dead by 11PM when I got back home, but the test was hardly scientific. I had no idea how much I used it nor did I really have a good comparison point, so I went back and reran two of my battery life tests from the original article.

"To test [talk time] I played music back on a notebook through some headphones placed right at the mic on the iPhone 3G. The phone was flipped over on a table to trigger its sensor and shut off the display, thus simulating a real call. I called my Vonage deskline from the iPhone and got to listen to 50 Cent play over and over again for hours, a homage to what I did last year with the first iPhone. "

WiFi was disabled and 3G was enabled for this test. 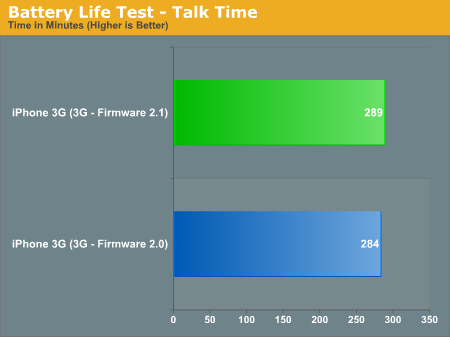 The talk time test hardly showed any improvement. While there’s a 5 minute increase in talk time, by percentage that’s not very good and is most likely due to normal variance between runs that I can’t really control.

"Our web browsing test is slightly different from what we ran in the iPhone review. We used a total of 7 web pages, but of much larger sizes than our first test. The first page was simply a counter page, the second was our review of the Core 2 Duo E6750, followed by our article on AMD's Phenom introduction, an excerpt from our Quad FX article, our entire iPhone review, an article on Intel's Turbo Memory and our entire AMD Radeon 2900 XT review.

Each page was loaded by the browser and was set to forward to the next page (in the above order) after 10 seconds; the iPhone’s brightness was set to approximately 50%. All backlight timers were disabled. Bluetooth was enabled but not paired to any devices." 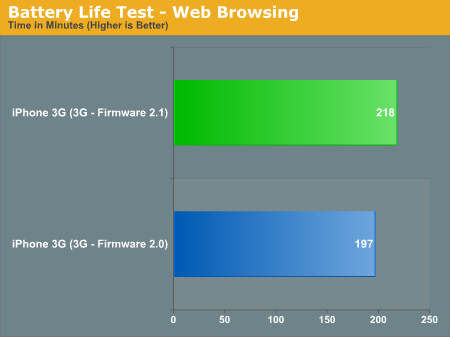 The web test fared a bit better - over 3G I saw a 10% increase in battery life. Apple can’t really create any additional battery life through software magic, but it would seem that the improvements users are seeing in battery life are mostly due to data usage and not voice.

My 3G test happens to be reasonably stressful as it is constant web surfing, which I doubt anyone has the patience to do on something with such a small screen regardless of how great its UI may be. In the end, real world battery life may go up even more but I’d say 10% is a fair increase for a simple firmware update.

Am I happy? Not really. It’s great that there’s a bit more battery life to play with, but the device still needed a real hardware upgrade - not the simple addition of GPS or 3G. It needs a faster processor, and we know there are faster things out there today. The firmware update did fix some of the performance issues, but just as I mentioned in the very first iPhone review - the device needs to be faster.

While the original iPhone was something I had no problems recommending, the new one (and even the old one with new firmware) just seems to come with more caveats. That last point is particularly interesting to me as the new iPhone firmware seems to have addressed some of the major issues (e.g. 3rd party apps) users had with the first generation product, yet in many ways it’s more problematic. It makes sense when you look at how Apple launched the original iPhone: it focused on a handful of things it wanted to make sure worked perfectly, and chose to ignore the rest until a later time.

The iPhone 3G and its associated firmware seemed like bad timing. Apple needed faster, more robust hardware but the demand for an app store and 3G were too high not to update the platform.

The situation we’re in honestly reminds me a lot of the 2nd iPod. It had all of the goodness of the first one, but just wasn’t terribly impressive anymore. It took a while for Apple to make that virgin impact again with its iPod line and I wonder if we’ll see it happen so soon with the 3rd iPhone?

Until then, the iPhone is still my phone of choice, but as I mentioned in my iPhone 3G article: Apple’s second step was in the wrong direction. It’s far easier to take a clumsy fall walking down stairs than going up.