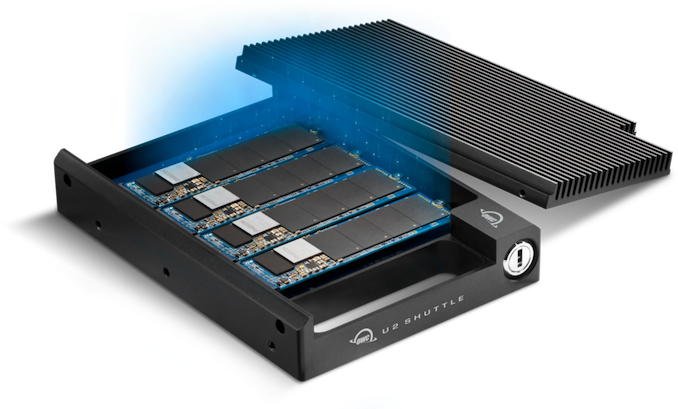 OWC is introducing the U2 Shuttle, a novel carrier module that packs four M.2 NVMe SSDs into a 3.5" U.2 form factor. The U2 Shuttle includes a PCIe switch to allow the four M.2 drives to share the bandwidth of the U2 Shuttle's PCIe 3.0 x4 interface. OWC will be selling the U2 Shuttle as either an empty carrier to be populated by the user, or with their own Aura Pro NVMe SSDs pre-installed for up to 32TB of storage.

There's hardly any ecosystem around 3.5" U.2 drives as opposed to the vastly more common 2.5" U.2 size, but OWC provides support with several of their Thunderbolt-attached storage products. Their new Mercury Pro U.2 Dual enclosure can accommodate two U.2 drives (2.5" or 3.5") and consequently with a pair of U2 Shuttles installed can hold up to 8 M.2 SSDs. OWC's Thunderbay Flex 8 can accommodate U.2 SSDs in four of its eight drive bays. OWC is also introducing a 3.5" U.2 retrofit kit for their Mercury Helios 3S PCIe expansion chassis. The U2 Shuttle can also be installed in ordinary 3.5" internal hard drive bays and connected with a U.2 cable, provided there's adequate cooling—four NVMe SSDs plus a PCIe switch can potentially add up to quite a bit more power than a typical 7200RPM hard drive.

The U2 Shuttle is marketed primarily as fast portable storage for professional media workflows, where a sneakernet solution may be the most straightforward way to transport many TBs of media from the set to the editing room. The U2 Shuttle doesn't have any RAID functionality of its own, but it can be used along with OWC's SoftRAID software RAID system. When used in the Thunderbay Flex 8 or an appropriate workstation or server setup, RAID functionality can also be provided through a tri-mode SAS/SATA/NVMe controller card. 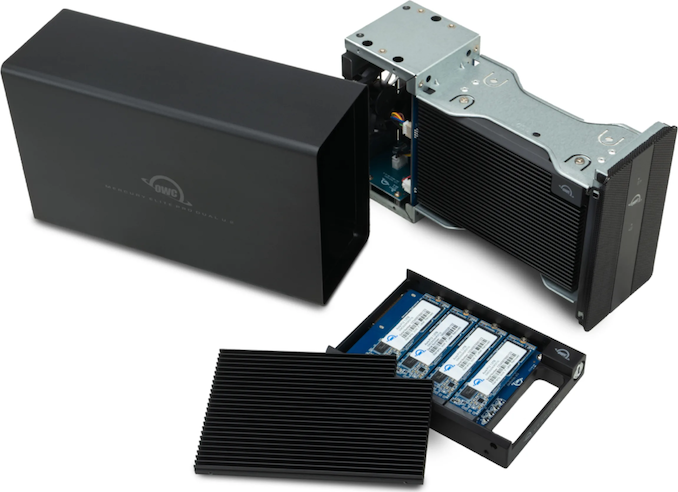 U2 Shuttle with Mercury Pro U.2 Dual enclosure

The U2 Shuttle's PCIe switch is ASMedia's 12-lane ASM2812X, so each of the four M.2 SSDs in the U2 Shuttle only gets a PCIe 3.0 x2 connection to the switch. This makes a RAID configuration highly recommended, because no single M.2 SSD inside the U2 Shuttle will be able to use the full 4-lane throughput.

The OWC U2 Shuttle is available for purchase direct from OWC. Pricing starts at $149.99 for the empty U2 Shuttle with no SSDs, and goes up to $5299 for the 32TB configuration. For the smaller capacities, buying the U2 Shuttle with OWC's SSDs pre-installed isn't necessarily any cheaper than just purchasing a typical 2.5" U.2 enterprise SSD. However, 32TB U.2 drives aren't exactly a commodity product yet, and going the DIY route with the empty U2 Shuttle and cheaper consumer-grade TLC SSDs can be a more affordable way to pack several TB of NVMe storage into one device.

Interested in more of the latest industry news? Check out our CES 2021 trade show landing page!