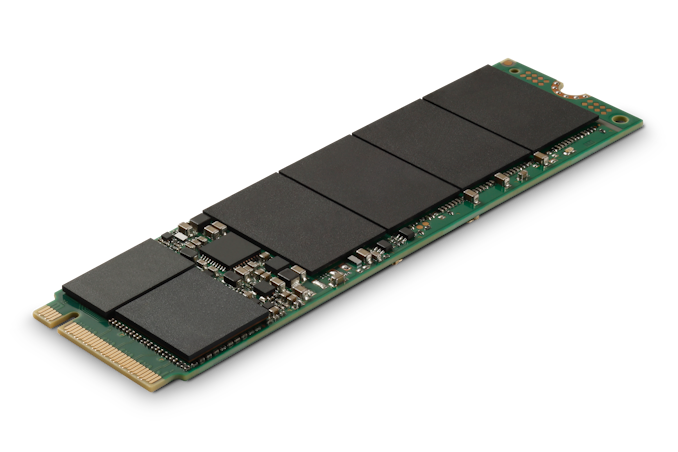 Solid state storage might not have been the most exciting tech sector to follow in 2020, but it certainly had its fair share of new technologies arriving, consumer-friendly price drops, and a major corporate acquisition deal.

COVID-19 Impact on Supply and Demand

Going into 2020, most analysts were predicting that a shortage of NAND flash memory would develop and drive up SSD prices, especially in the second half of the year. The COVID-19 pandemic upended those predictions. Early on in the pandemic, it was anybody's guess whether supply or demand would be more strongly affected. By the middle of the year, it was clear that the fabs in Asia where most of the world's NAND flash is manufactured were able to weather the pandemic with no significant drop in manufacturing capacity.

The lifestyle shifts to work-from-home and online learning drove some demand for new PCs and increased server capacity for online services, but the broader economic impact of the pandemic largely outweighed those effects and hurt overall demand. The net effect is that, contrary to pre-pandemic predictions, SSD demand is low enough that the NAND flash market has an oversupply and prices are in decline. This is expected to continue through at least the first quarter of 2021 with a 10-15% drop in NAND flash memory prices. The impact on retail SSD prices will be somewhat dulled by the fact that supplies are tight for SSD controllers and some other components, which may push SSD manufacturers to focus a bit more on high-capacity high-end drives, especially datacenter drives.

Perhaps the biggest shift in consumer storage this year was the arrival of gaming consoles built from the ground up to take advantage of solid state storage. Consoles generally establish the baseline hardware capabilities that games and game engines are designed to target. For over 15 years, this has meant that AAA games are designed to run off hard drives. Even as SSDs have become prevalent in gaming PCs, it has until recently been unthinkable for a game to list a SSD as part of its minimum system requirements. The PlayStation 5 and Xbox Series X have now raised the baseline storage performance from that of a mechanical hard drive to a NVMe SSD, and game developers are actively encouraged to take advantage that extra performance. Furthermore, the consoles include various other hardware features intended to complement the new console SSDs; we gave you the rundown on those features and their implications back in June.

So far, the console transition to NVMe storage has had little impact on the PC market or PC gaming—but the consoles have only been shipping for a short while, and game developers are still learning how to adapt to the new freedoms granted by fast storage. This console storage transition will be having more influence on PCs over the next few years. Microsoft is already working to adapt their new Xbox storage APIs into DirectStorage for Windows, and it won't be long before most AAA games require SSDs. For gaming PCs, including a NVMe SSD will be just as important as including a discrete GPU.

Read More: Storage Matters: Why Xbox and Playstation SSDs Usher In A New Era of Gaming

The transition to PCIe 4.0 started in the middle of 2019 with the debut of AMD's Ryzen 3000 processors. On the storage side of that transition, SSD controller vendor Phison led the way with their E16 controller. But in 2019 and most of 2020, PCIe 4.0 storage remained a niche market segment, only available on new high-end desktops and with SSDs that offered only marginal performance improvement over the best PCIe 3 drives but carried much higher price tags.

All of Phison's competitors decided to take their time with the PCIe 4.0 transition; 2020 was supposed to be the year that a new wave of gen4 SSD controllers arrived, fabbed on more advanced processes like TSMC's 12nm FinFET so that the full performance of a PCIe 4 x4 interface could be reached within a reasonable power budget. The COVID-19 pandemic contributed to delays here as well, and many new SSDs previewed at CES at the beginning of the year arrived late or are still missing. Samsung and Western Digital delivered their new in-house gen4 NVMe SSD controllers during the second half of the year, and SSDs using Phison's E18 controller hit the market at the end of November, just in time to catch the tail end of the holiday shopping season. Silicon Motion's entry-level gen4 controller also arrived this fall, but their high-end contender is not yet available. Planned gen4 controllers from Marvell are absent (though their NVMe controllers have all but vanished from the consumer SSD market anyways), and Innogrit's high-end NVMe controller only just showed up this week in the ADATA Gammix S70 that is currently sampling and should hit the shelves soon.

So while the PCIe gen4 transition is going more slowly than planned, it is still happening. PCIe 4.0 support is finally starting to creep into mobile platforms, which will help make it more mainstream. The PCIe 4.0 SSD options available today are significantly better than the first wave drives that were available a year ago, and the gen4 SSD market is starting to see enough competition to keep prices in check. PC gamers also have plenty of choices for high-end SSDs that match or exceed the performance of what's in the new gaming consoles.

The SATA SSD market has been stagnant for several years, with very few major announcements of new SSD models or controllers. Most SSD vendors have taken to quietly updating the NAND inside their existing SATA models, so familiar names like the Crucial MX500 (launched in December 2017) are still nominally current. Samsung launched the 870 QVO with their second-generation QLC NAND, but the current EVO and PRO SATA models are still the 860 generation.

This year, it is clear that the SATA SSD market isn't just boring, but actually dying. When PC OEMs finally started to drop hard drives even from their low-end machines, they replaced them with NVMe SSDs rather than SATA. There are plenty of options for low-end NVMe SSDs, and they pretty much all outperform SATA SSDs for typical real-world use. The capacity advantage for SATA SSDs is now mostly gone: there are 8TB QLC and 4TB TLC options for both SATA and NVMe, though massive NVMe SSDs do still carry a price premium over SATA SSDs of similar capacity. Some major SSD vendors have already EOL'd their client OEM SATA SSDs. The SATA SSD market is collapsing in the same direction as the hard drive market: the list of use cases where SATA SSDs make sense is shrinking, and looks a lot like the list of use cases where hard drives still make sense. The biggest lingering advantage SATA SSDs have going forward is that a desktop or NAS usually has more SATA ports/bays than M.2 NVMe slots.

Since mechanical hard drives won't be disappearing in the foreseeable future, SATA SSDs can also stick around for a very long time, but increasingly as niche products rather than reasonable candidates for primary storage in a consumer PC. We don't recommend SATA SSDs for new PC builds, there aren't many PCs left that need a SATA SSD for an aftermarket upgrade, and SSDs in general are still too expensive to replace hard drives for consumer NAS and backup duty.

QLC NAND flash hit the market in 2018. This stores four bits of data per physical memory cell, rather than the three bits per cell of more mainstream TLC NAND flash memory. The general situation for consumer QLC SSDs isn't much different today from when they first showed up. Compared to TLC, QLC NAND is a bit cheaper, but sacrifices performance and write endurance. Those tradeoffs can make sense for an entry-level SSD, but it's not the only way to make a good affordable SSD. DRAMless SSDs with TLC NAND are still competitive at capacities up to 1TB, especially when using NVMe rather than SATA.

We're now two or three generations into the QLC era and QLC is making some inroads to the market, but it definitely isn't taking over—not even for entry-level consumer SSDs. Aside from product refreshes that replaced 64-layer QLC with 92/96L QLC, most of the action has been the introduction of new QLC product lines based around the Phison E12S NVMe controller, and a few using the Phison E16 PCIe 4.0 NVMe controller. These drives have raised the bar a bit for consumer QLC performance since they use 8-channel controllers rather than the 4-channel controllers used by most other low-end NVMe SSDs, and those controllers have also helped enable several 8TB M.2 NVMe products. 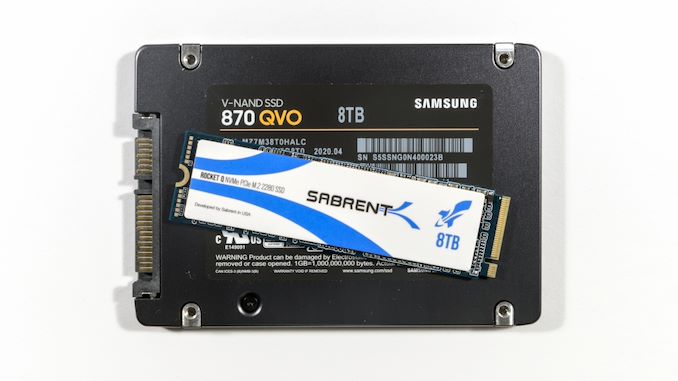 There are some indications that in 2021 we may see significant adoption of QLC by PC OEMs. So far, they have been wary of using QLC SSDs in part because they have to cover them as part of the whole system's warranty. Consumer QLC SSDs are no longer an unproven novelty, and OEMs can now secure multiple sources of QLC client SSDs. Uptake of QLC by PC OEMs may complicate the laptop buying process for consumers trying to avoid QLC drives, but on the other hand it should help finish pushing mechanical hard drives out of prebuilt PCs.