From the first time we heard the name Yonah we knew that its designers would be introducing some interesting power management technologies. While we don't normally like filling articles with quotes, here's one from Mooly today that is a great segway into this section:

"Yonah battery life will not be shorter than Dothan battery life...[it's] a huge achievement"

Given that Yonah will have twice the decode/execution transistors of Dothan, offering equal battery life for Yonah notebooks is a pretty impressive claim. 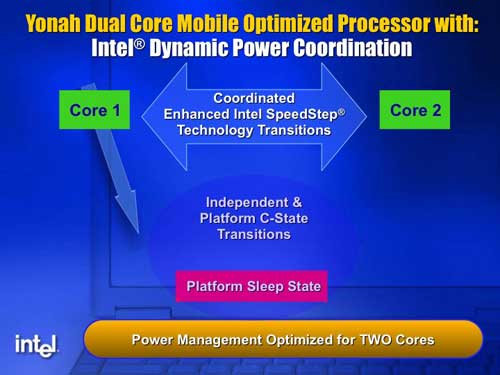 Mooly went through some of the power management technologies in Yonah that Intel is calling Dynamic Power Coordination. The idea is this - there are some areas where you can have each core operate independently with regards to reducing power consumption, but other areas where you can't.

The CPU's goal is to complete the tasks it's given, while always striving to be in as low of a power state as possible. So for example, if a Dothan is running an application that doesn't require full performance, it can operate in one of the lighter power saving states until it is done working, then eventually drop all the way down to C4.

The lighter power saving stages just do things like reduce clock speed or gate the clocks to parts of the chip, these types of things can be done independently on each core in Yonah (e.g. one core can be in C1 while the other core is in C0). Once you get down to adjusting voltage and playing with the PLL, then the two cores can't act independently - since they are both fed the same voltage and clock signal. Here is where Intel's Dynamic Power Coordination comes into play; if one CPU wants to go to a lower power state (e.g. C3 or C4) but the other core is running at C0, it will inform Intel's DPC logic of the current situation. Intel's logic, as you would expect it to act, will wait until the core running in C0 is done working and then move both cores down to the lower power state. Synchronization like this is important and it helps keep power consumption down to a minimum.

Because of the power management that is needed for Yonah, the two cores have to always work closely together to make sure that they are aware of each other's power state desires - for this reason alone Yonah is already much more than a pair of Dothans with a shared cache. 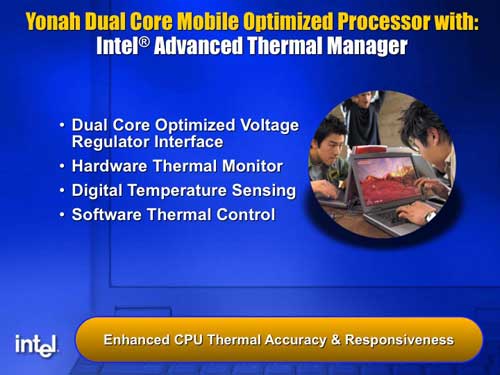 Yonah also introduces finer grained thermal management through what they are calling the Advanced Thermal Manager. With dedicated digital thermal sensors in each core, each with a higher accuracy, the temperature data the CPU can feed the rest of the system is more accurate in Yonah than in previous generation Pentium M CPUs. Although Mooly didn't talk about it here, you can expect that the thermal management technology in Yonah will allow for one core to be slowed down independently of the other if power consumption or heat dissipation rises too much.