After an extremely eventful Day 1, Intel kicked off Day 2 of the Intel Developer Forum with a keynote by Sean Maloney, Intel's Executive VP and General Manager of the Mobility Group. 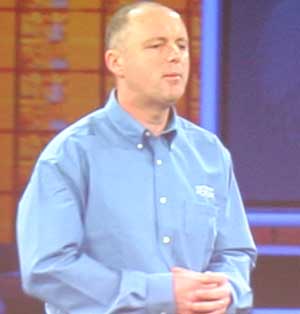 Maloney's keynote started by talking about Intel's involvement in mobile phones, PDAs and flash memory. The first demo of the day was actually quite impressive, even though it wasn't of any new technology.

Sean Maloney had two systems setup, a 3 - 4 year old Thinkpad notebook and what appeared to be a similarly old desktop computer. He was playing Meet the Fockers on both platforms, with the Thinkpad clearly dropping frames in the video, while the desktop computer was playing it smoothly. Not too surprising right? Then he lifted the case off of the desktop PC and revealed that the video was playing back on a cell phone - faster than a laptop from 3 - 4 years ago.

Phones have been getting more and more powerful, and things are only going to get better from here.

Intel also showcased some of the benefits of high speed data connections on Cell phones such as 1-button Connect. The idea behind 1-button Connect is by clicking one button on your notebook or phone, you can have your phone automatically sync everything with your PC wirelessly. It's nothing too amazing, but the importance of synchronization will increase as cellular bandwidth increases and storage space goes up on phones.