Qualcomm Announces Snapdragon 690: 5G & A77 In The Mid-Range

Today Qualcomm is extending its 5G SoC portfolio down to the Snapdragon 600-series, introducing the new Snapdragon 690 platform and chip. The new design is a more significant upgrade to the 600-series, not only upgrading the cellular capabilities, but also upgrading some of the cornerstone IPs to the newest generation available.

Although the new Snapdragon 690 maintains its CPU configurations in terms of big and little cores in a 2+6 setup, Qualcomm has managed to include the newest Cortex-A77 IP for the big CPU cores, resulting in a 20% performance uplift thanks to the microarchitectural improvements. The clock speeds remain the same as found in other recent 600-series designs, meaning 2GHz on the big cores and 1.7GHz for the A55 cores.

On the GPU side, we see the shift to a new Adreno 619L design sees a much bigger shift with an up to 60% increase in performance compared to the previous generation Snapdragon 675.

Memory-wise, it’s still a LPDDR4X SoC with dual 16-bit channel support, which is plenty for the bandwidth requirements at this performance segment. 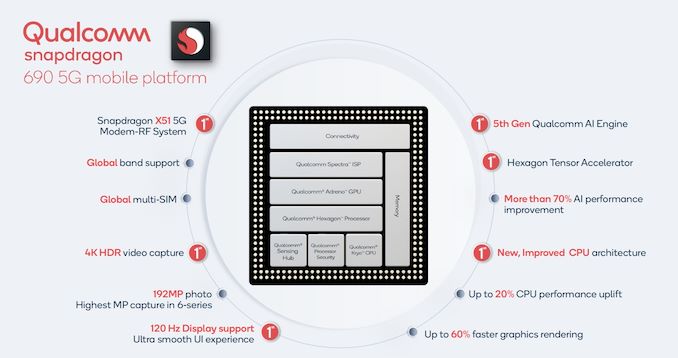 Qualcomm is also trickling down some of the newer higher end multimedia features to the 600-series, such as the newer generation Spectra iSP which is able to support up to 192MP still pictures or up to 48MP sensors with multi-frame noise reduction, or a dual-camera setup in tandem of 32+16MP sensors. The chip has a 10-bit capture and display pipeline, allowing it 4K HDR capture and display – although we didn’t see mention of 4K60 recording.

The key feature of the Snapdragon 690 is its shift towards a 5G modem platform. The integrated X51 modem now adds support for 5G sub-6GHz with global band support. The speeds here scale up to 2500Mbps downstream and 1200Mbps upstream on sub-6 networks, utilising up to 100MHz of spectrum bandwidth. The chip seemingly makes without mmWave connectivity, and this makes a lot of sense given the price range that the 600-series is meant to be used in, as well as the general lack of mmWave adoption in most markets.

We’re expecting the new chip to be deployed in devices by various vendors in the second half of the year.