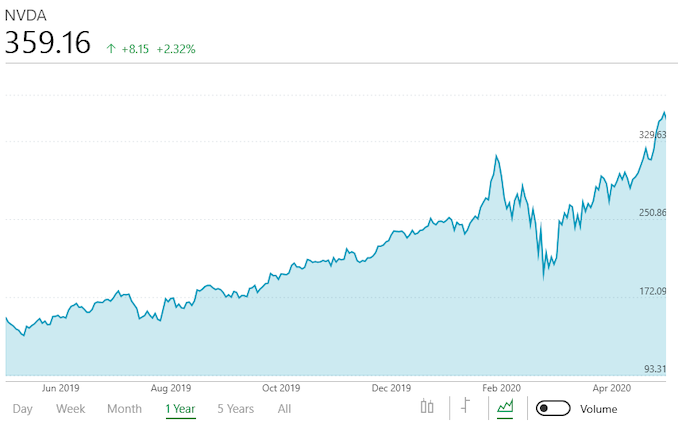 This week NVIDIA announced their earnings for the first quarter of their 2021 fiscal year. The current fiscal year is an especially important one for NVIDIA on both a business level and a product level, as the company is enjoying closing the Mellanox deal, all the while opening up shipments of their new datacenter-class A100 accelerators. Especially coming off of last year’s crypto-hangover, NVIDIA has started their new fiscal year with the good times rolling on.

For Q1’FY21, NVIDIA booked $3.08B in revenue. Compared to the year-ago quarter, this is a jump in revenue of 39%, making for a very strong first quarter that was only a hair under Q4, which is commonly a very strong quarter for NVIDIA. Those sizable revenues, in turn, are reflected in NVIDIA’s profits: the company booked $917M in net income for the quarter, more than double Q1’FY20. In fact it’s the second-best Q1 ever for the company; only Q1’FY19 was better, which was in the middle of the crypto boom.

What was a record, however, was NVIDIA’s gross margin. For the quarter NVIDIA booked a GAAP gross margin of 65.1%, edging out the previous quarter and beating even Q1’FY19. As NVIDIA’s revenues have shifted increasingly towards higher-margin products like accelerators, it’s helped the already profitable NVIDIA to extend that profitability even further.

Breaking down NVIDIA’s revenue by platform, while there are no great surprises per-se, the company has reached some milestones that are strong indicators of where things are going. Starting with NVIDIA’s datacenter revenue, that platform of their business has set a record for revenue for a second consecutive quarter, with $1.141B in revenue. This marks the first time NVIDIA’s datacenter business has booked more than $1B in revenue in a single quarter, and NVIDIA doesn’t expect it to be the last.

While the picture will get muddled a bit next quarter as Mellonox revenue is folded into this mix, the big picture is that datacenter accelerator sales are strong, and set to grow. NVIDIA’s Ampere-based A100 accelerators began shipping for revenue in Q1, helping to boost the numbers there, while Q2 will be the first full quarter of sales. According to NVIDIA, they’re already seeing broad demand for datacenter products, with the major hyperscalers quickly picking up A100s. Overall, NVIDIA’s Volta-generation accelerators were extremely successful for the company, almost but not quite growing the datacenter business to one billion dollars per quarter, and the company is eager to repeat and extend that success with Ampere.

Meanwhile, NVIDIA’s largest business, gaming, was also strong for the quarter, with the company booking $1.339B in revenue. While down seasonally as usual, NVIDIA is reporting that they have weathered the current pandemic similar to other chipmakers, with soft sales in some areas being counterbalanced by greater demand for chips for home computers as workers shift to working from home.

Interestingly, there’s a very real chance that this could be one of the last quarters where gaming is NVIDIA’s biggest revenue generator. Along with folding Mellanox into the company – and into the datacenter segment – NVIDIA’s datacenter business as a whole has been growing at a much greater clip than gaming. NVIDIA has made it very clear that they’re pushing for a more diversified revenue stream than their traditional gaming roots, and if the datacenter business grows too much more they may just get there this year. Though it will be interesting to see what the eventual launch of Ampere-based gaming products does for gaming revenue, as NVIDIA’s revenue also reflects the fact that they’re nearing the end of the Turing generation of products.

Bringing up third place was NVIDIA’s professional visualization platform, which saw $307M in revenue. As with gaming sales, the company is seeing a boost in sales due to work from home equipment purchases. This comes on top of the day-to-day demand for workstation laptops, which NVIDIA has been increasingly invested in.

Finally, NVIDIA booked $138M in OEM & IP revenue for Q1’FY21. While this platform is small potatoes compared to gaming and datacenter, on a percentage basis it’s actually another big jump for NVIDIA; the segment grew 39% over the year-ago quarter. According to NVIDIA, the main driving factor here was increased entry-level GPU sales for OEM systems.

Wrapping things up, looking ahead to Q2 of FY2021, NVIDIA’s current predictions call for another strong quarter. Having closed the Mellanox deal, Mellanox’s earnings will be folded into NVIDIA’s numbers starting in Q2, helping to push the company to what should be record revenue. Meanwhile on the product side of matters, Q2 will be the first full quarter of A100 accelerator shipments, which should help NVIDIA further grow their datacenter business.