Alongside today's launch of AMD's new EPYC 7F32, 7F52, and 7F72 processors, stalwart server motherboard and chassis vendor Tyan has officially announced their support for the new chips. Complimenting AMD's announcements, Tyan is adding support for the chips to select models of their Transport HX barebones servers, which are designed for high-performance computing and server data-driven workflows.

On the back of a new range of EPYC 7002 processors focused on higher core frequency, Tyan has added support to three models. This includes the Tyan Transport HX TN83-B8251, the TS75A-B8252, and the TS75-B8252. Each model follows a 2U2S design for rack mounting and is offered in barebones form with dual SP3 sockets.

The Tyan Transport HX TN83-B8251 officially supports the new AMD EPYC 7F32, AMD's 8 core, 180 W TDP chip with base clock of 3.7 GHz and a maximum turbo of 3.9 GHz. The TN83-B8251 comes barebones style inside a TN83 chassis, offering sixteen memory slots with support for DDR4 ECC RDIMM/LRDIMM, as well as 3DS RDIMM/LRDIMM memory with speeds of up to DDR4-3200, for up to 4 TB of capacity. On the Tyan S8251GM2NE-2T motherboard is an Intel X550-AT2 dual 10 G Ethernet controller, with a dedicated Realtek IPMI Ethernet port, and an Aspeed AST2500 BMC.

Storage-wise, there is support for up to ten SATA drives via two Slim SAS ports and eight NVMe ports with four SFF-8654 Slim SAS connectors. For graphics cards, there are four full-length PCIe 4.0 x8 slots, with two HH/HL PCIe 4.0 x16 slots which are available with included riser cards.

Also launched is the Transport TS75A-B8252 and TS75-B252, which both come with a TS75A 2U rackmount chassis and have ten PCIe 4.0 slots. Some of the main features include an Intel X550-AT2 dual 10 G Ethernet controller, an Aspeed AST2500 BMC with Redfish support, which uses a Realtek IPMI Ethernet port. Also included on the S8252GM2NE-2T motherboard is ten PCIe 4.0 slots with three full-length, one PCIe 4.0 x16 OCP 3.0 slot, with the rest accessible via pre-installed riser cards. Both include thirty-two memory slots with support for up to 8 TB of DDR4-3200 ECC memory, with support for RDIMM, LRDIMM, and 3DS modules. 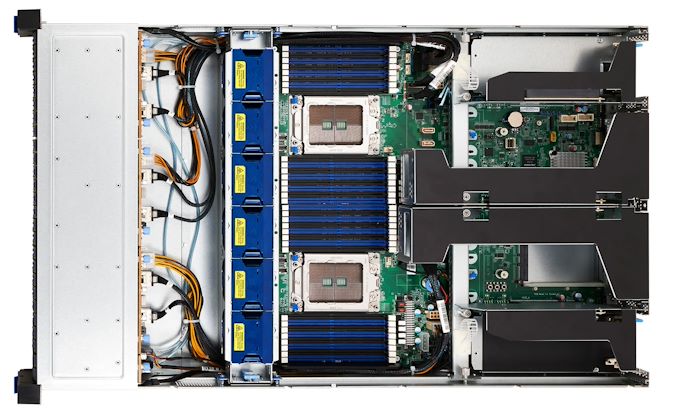 The only difference between the two B8252 models is through the level of storage support offered. The TS75A-B8252 has twenty-six 2.5" SATA bays, with twenty-four SATA drives coming from four SFF-8654 connectors, and two regular SATA powered by a Marvel 9235 SATA controller. There are also two NVMe PCIe 3.0 M.2 slots. The TS75-B8252 has twelve 3.5" SATA bays, with four NVMe U.2 ports which can be used in the bays as well.

Each model offers its own benefits for the server, data center, and high-frequency trading systems. The new AMD EPYC 7002 7F32, 7F52, and 7F52 feature higher core frequencies, with higher boost frequency capabilities, with the 7F52 offering the highest core-to-cache ratio of any x86 processor on the market.

At present, Tyan hasn't announced when each of the three new models will be available to purchase, or how much they might retail for.