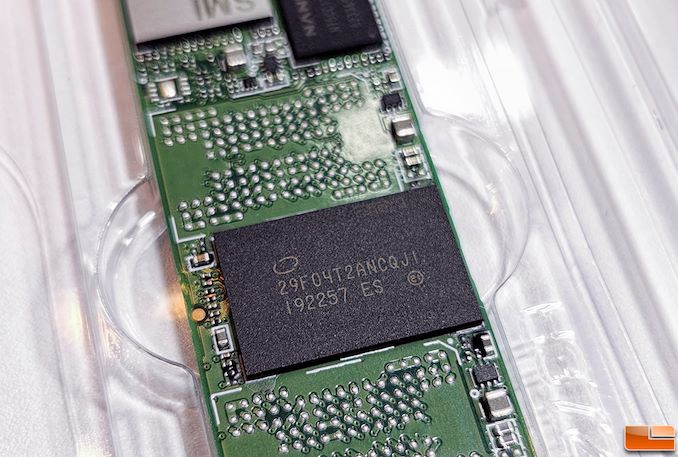 Intel's Memory and Storage Day event today in South Korea was mostly focused on enterprise and datacenter products, but they did announce an upcoming consumer SSD: The Intel SSD 665p. This is the successor to the Intel 660p, the first and most successful consumer SSD to use four bit per cell (QLC) NAND flash memory. The 665p isn't a major update: it keeps the same Silicon Motion SM2263 4-channel controller but updates the NAND to Intel's second-generation 96-layer 3D QLC NAND. This newer QLC keeps the same 1024Gb per-die capacity while shrinking overall die size, so we don't expect any change to the range of drive capacities offered nor any major performance changes—but it may lower prices a bit.

Intel showed off the 665p with a live demo pitting the 1TB 660p against a 1TB 665p prototype with pre-production firmware, each installed in otherwise identical ASUS notebooks. Intel used a beta version of CrystalDiskMark 7 to illustrate the 665p's performance: 40-50% improvement to sequential transfer speeds and about 30% faster random access speeds. 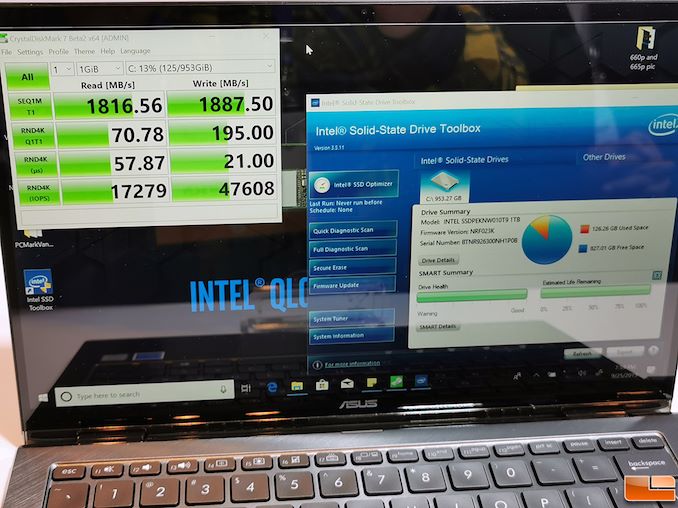 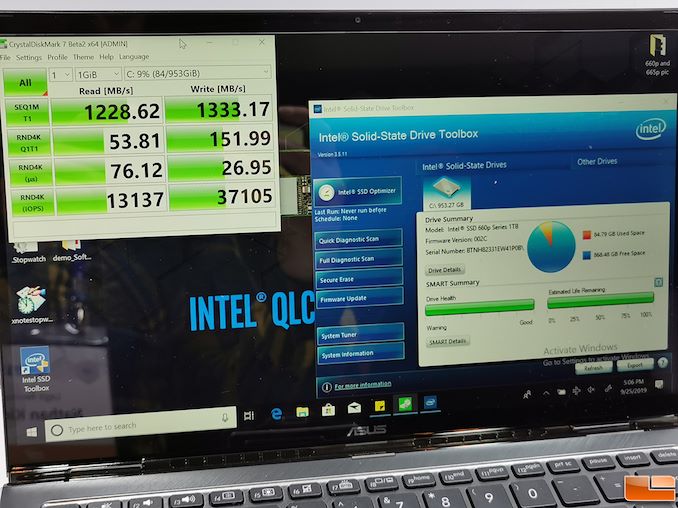 Caveats: given the short test duration and relatively empty state of the drives, these numbers are measurements only of the SLC cache performance. It's not clear how much the worst-case write speeds to QLC have changed, and that's where the 660p falls far behind TLC based SSDs. The sequential IO numbers Intel showed for the 660p are also well below what we've measured with the 660p on our own testbed using CDM 7, so the sequential IO improvement might be more along the lines of 20% rather than 40-50%. Our testing of the Intel 660p also showed that it can reach similar speeds of 1.7-1.8GB/s in sequential transfers with a high enough queue depth, so the 665p's improvement here may amount to extending that performance down to queue depth 1. Either way, it looks like the 665p will be another drive that offers good enough performance for most use cases, but doesn't really need all four PCIe lanes. 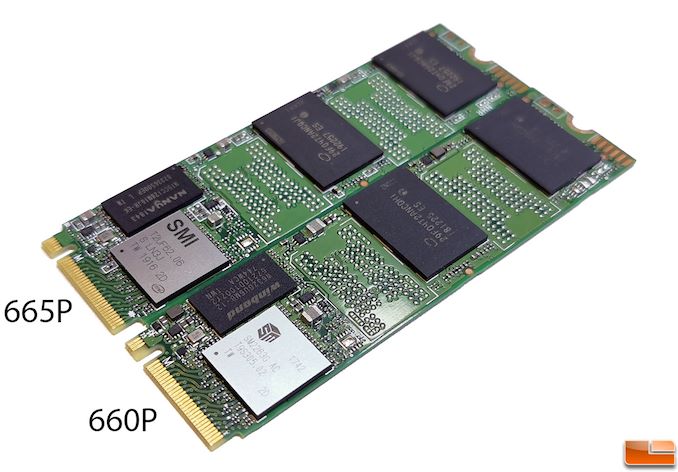 Nathan Kirsch over at Legit Reviews has shared his close-up photos of the 665p alongside the 660p, so we know that the PCB layout is essentially unchanged: a single-sided M.2 2280 drive that only needs to populate all four NAND package locations for the 2TB model.

Intel hasn't shared the planned launch date for the 665p, but it should be no more than a few months away. Pricing should be comparable to the 660p, making it one of the cheapest consumer NVMe drives on the market.