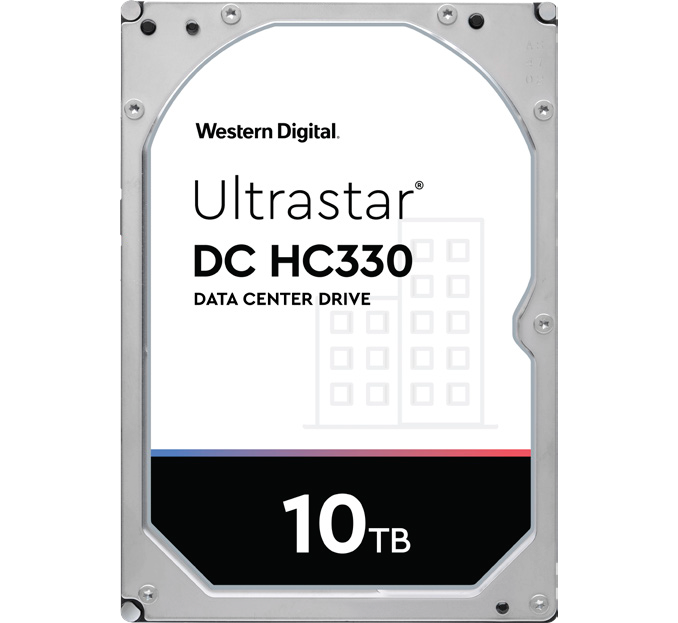 Western Digital has introduced its new top-of-the-range air-filled hard drive for enterprises that use storage servers, RAID arrays, and distributed storage. The Ultrastar DC HC330 HDD expands the capacities that Western Digital offers for this market segment to 10 TB and also introduces the company’s Media Cache Plus technology that promises to improve write performance by up to 40% in certain cases.

The Western Digital Ultrastar DC HC330 is the latest addition to the company’s Ultrastar DC HC300-series family that includes 4, 6, and 8 TB hard drives (that were originally introduced under different model numbers). While these hard drives are classified as ‘datacenter’ devices, they are aimed at enterprises that need loads of storage space and high performance, but not those operating large datacenters that require maximum capacities. All the HDDs in the lineup are based on the company’s enterprise-class platform that uses conventional magnetic recording (CMR, which refers to perpendicular magnetic recording in this case) featuring appropriate reliability and durability enhancements (e.g., bottom and top attached motors, RAFF technology to protect against vibration, dual-stage micro actuator to improve positioning, etc.).

The Ultrastar DC HC330 10 TB air-filled hard drives rely on six 1.66-TB CMR platters (the highest-capacity commercially available platters in the industry today), down from seven 1.42 TB PMR disks in case of the helium-filled Ultrastar He10. The HDDs use a motor featuring a 7200 RPM spindle speed, a 256 MB buffer, and will be offered with a SATA 6 Gbps or a SAS 12 Gbps interface as well as 4 KB and 512E sectors.

Usage of high-capacity platters enabled the Ultrastar DC HC330 10 TB to increase its sustained transfer rate up to 273 MB/s (faster than cheap SSDs when it comes to large data transfers). In addition, the new hard drive features non-volatile Media Cache Plus technology that boosts random write performance by up to 40% when the queue depth is low or the transfer length is short.

In theory, reduction of the number of platters should have reduced the power consumption of the Ultrastar DC H330 compared to the Ultrastar He10, yet it is not the case as the drive is air-filled, not helium-filled. The new drive consumes up to 9.2 W of power in operating mode, up from 6.8 W in case of its predecessor. This does not mean that the new HDD is necessarily worse than its 10 TB predecessor. Firstly, it is cheaper to manufacture, and secondly, since it is faster in general use-cases as well as in certain write-intensive scenarios, it may still be power efficient enough for most use-cases (especially keeping positioning of the product). On the other hand, even when in idle, it consumes 3 W more when compared to its predecessor (8 W vs. 5 W), which might be a problem for companies like Amazon or Netflix that use millions of HDDs across tens of large datacenters, but shouldn't represent too much of a big issue for companies employing smaller deployments.

Covered by a five-year warranty, Western Digital’s Ultrastar DC HC330 10 TB HDDs will be available to OEM, cloud, and enterprise customers in September. Pricing will depend on volumes, amongst other factors.