11:46AM EDT - The first talk on Day 2 of Hot Chips is from NVIDIA, going into more detail about how the NVSwitch works with a lot more detail than from previous talks. Also its implementation within DGX-2 is explored. 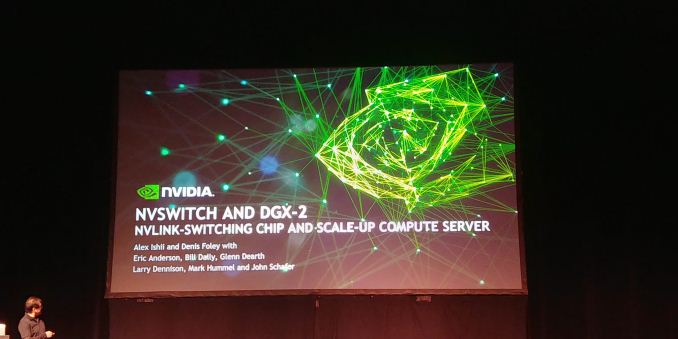 11:47AM EDT - NVSwitch and DGX-2 was originally a research program 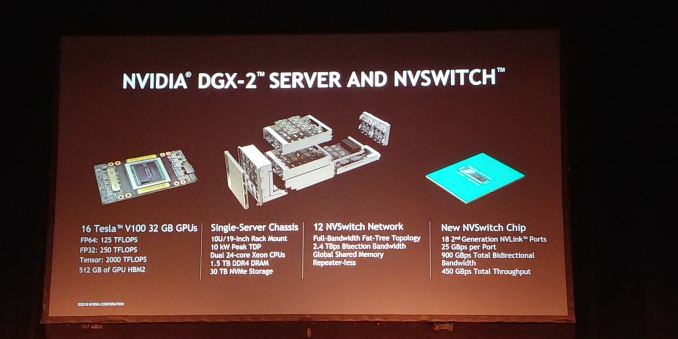 11:48AM EDT - Every GPU works in the same address space 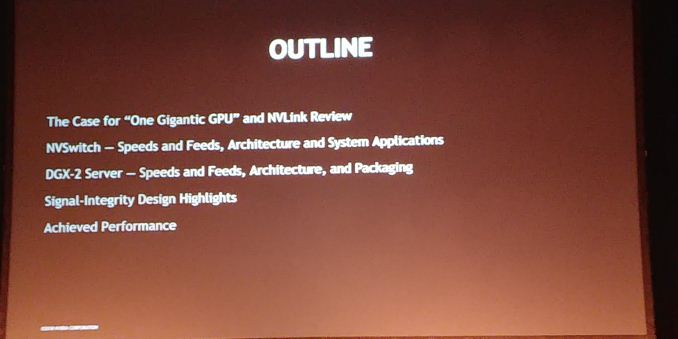 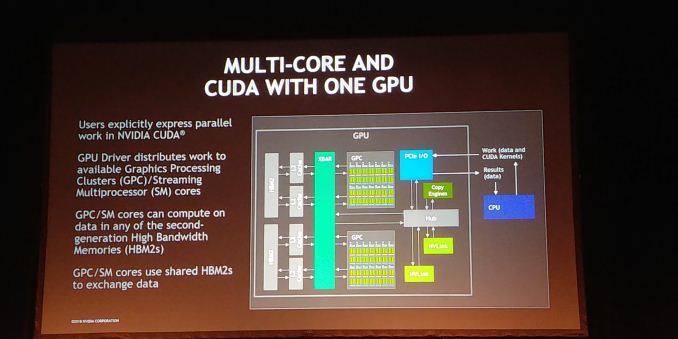 11:51AM EDT - For two GPUs, accessing other GPU memory takes a long time. Limited by PCIe 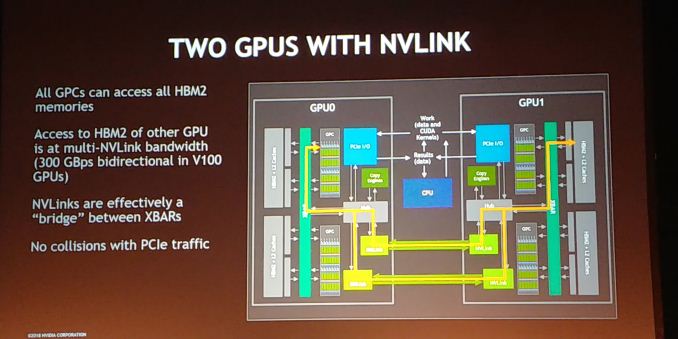 11:52AM EDT - With that much bandwdith, two GPUs looks like one GPU 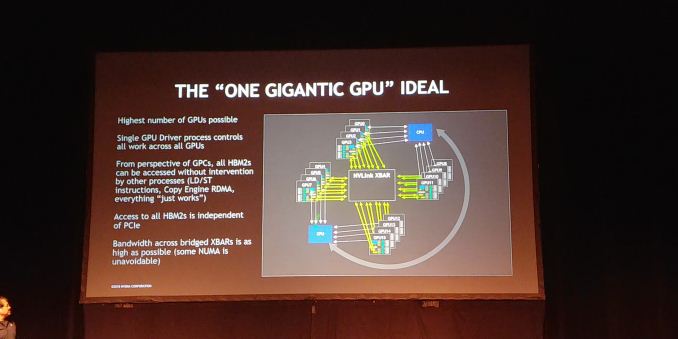 11:52AM EDT - Aim is to make as many GPUs as possible in a single system with a single GPU driver process 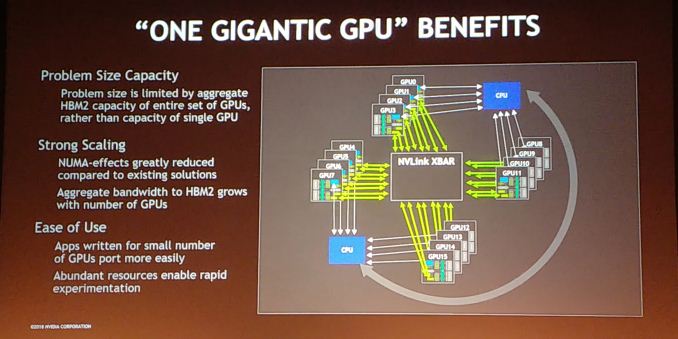 11:53AM EDT - Bypass memory limits as you can access all HBM on all GPUs from one GPU

11:53AM EDT - Just need a decent crossbar for NVLink 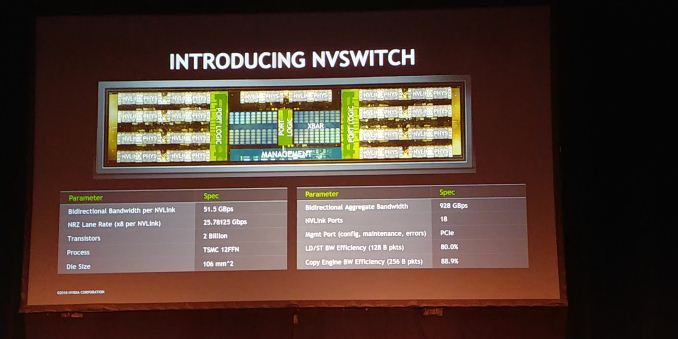 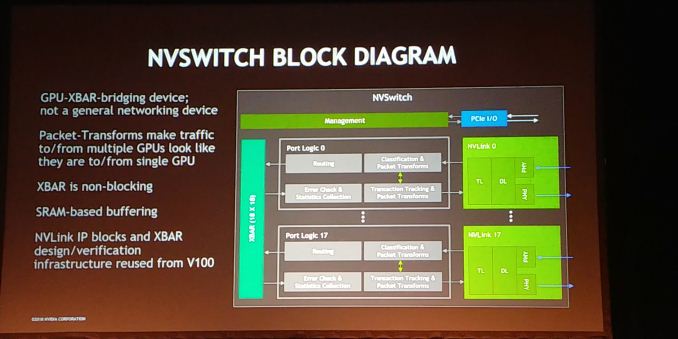 11:55AM EDT - Not a normal networking switch

11:56AM EDT - Does not have a lot of networking features such as advanced QoS - it's designed just for GPUs and a known environment

11:56AM EDT - Transforms are spoofing as if each GPU sees one other GPU 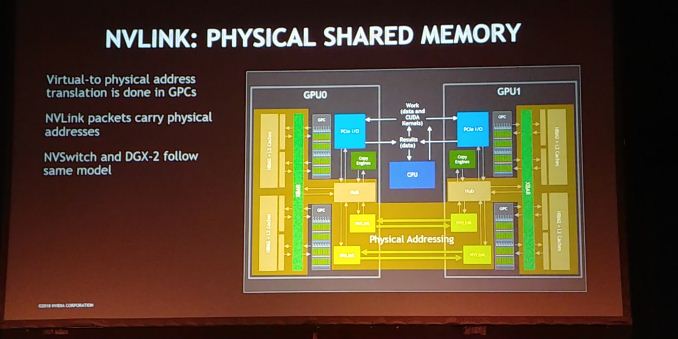 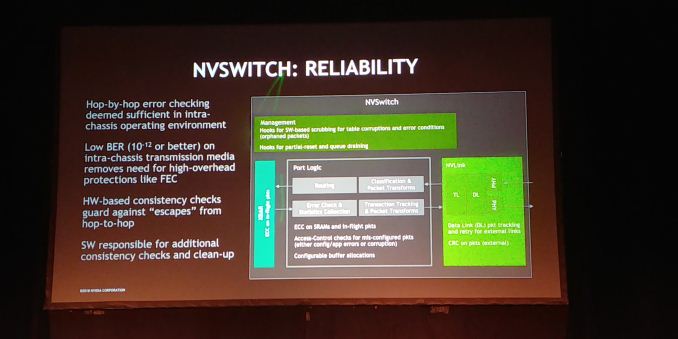 11:58AM EDT - packet checking via software 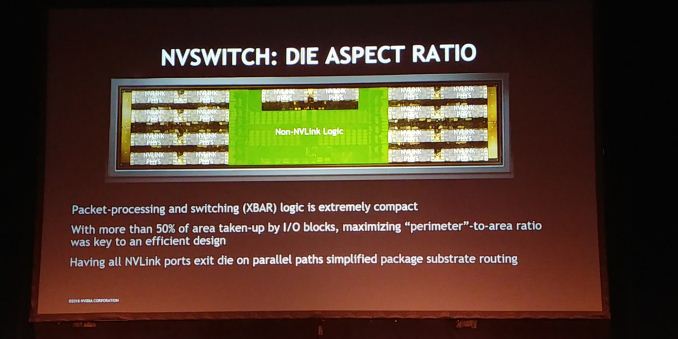 11:59AM EDT - Maximizing perimeter to area ratio was key to an efficieny design 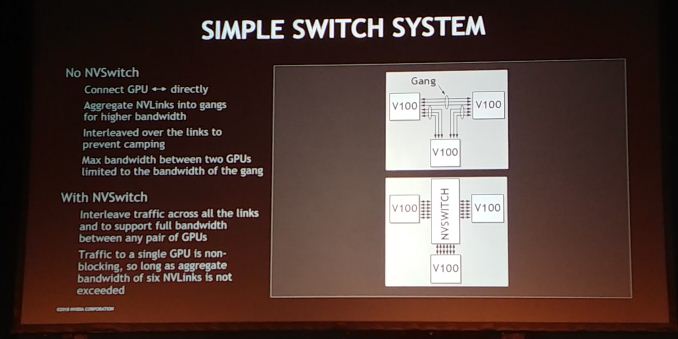 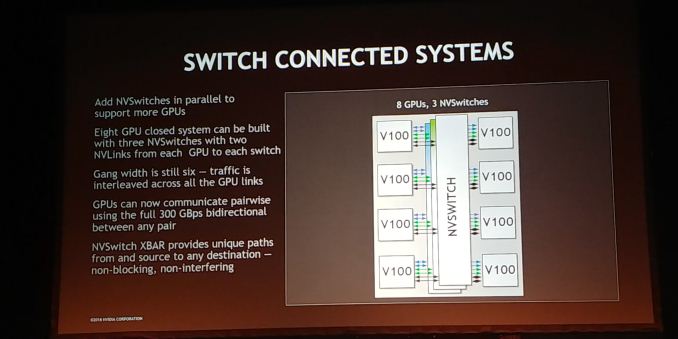 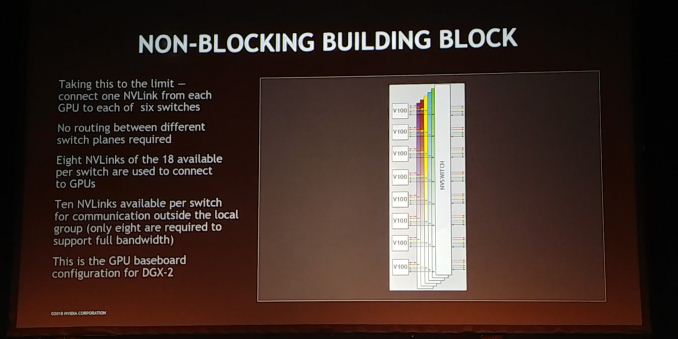 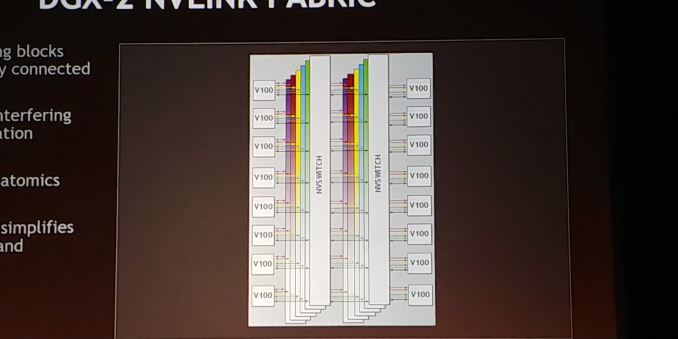 12:02PM EDT - Could have used just 6 switches, but makes manufacturing and routing easier 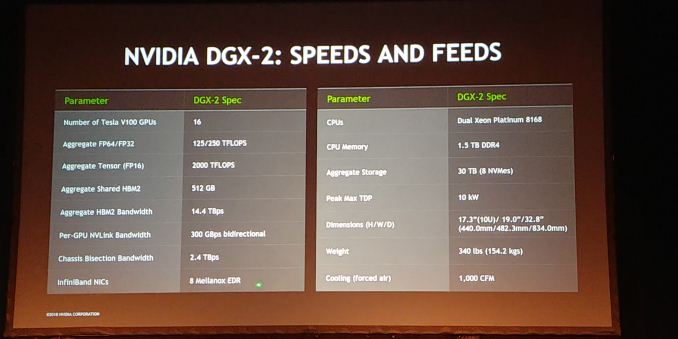 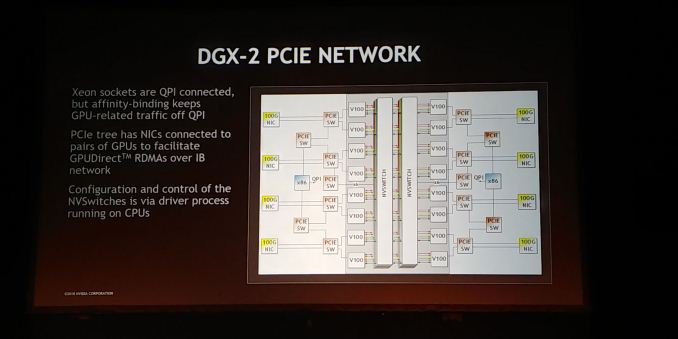 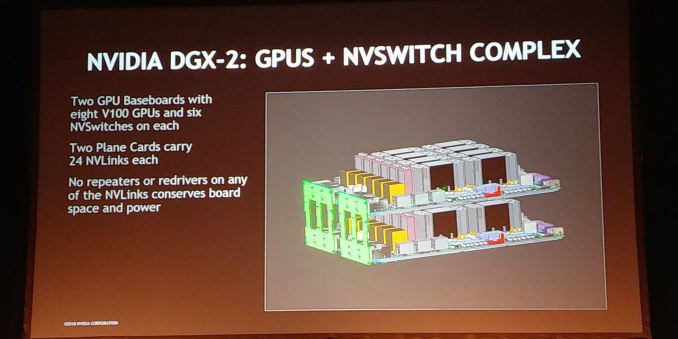 12:04PM EDT - Two GPU baseboards connected with a plane card with no repeaters or buffers 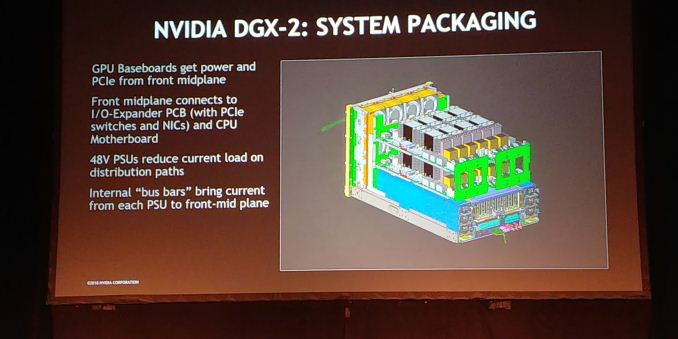 12:05PM EDT - Copper bus bars to get current up to the planes 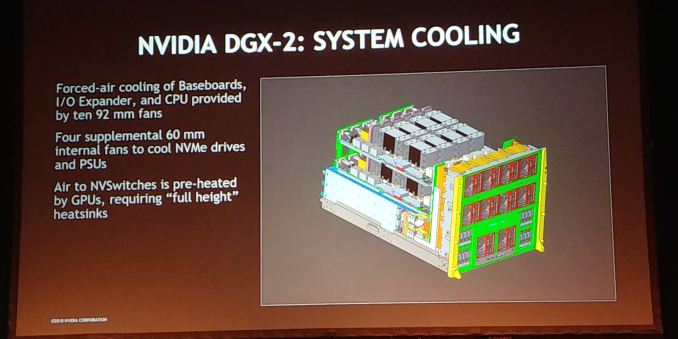 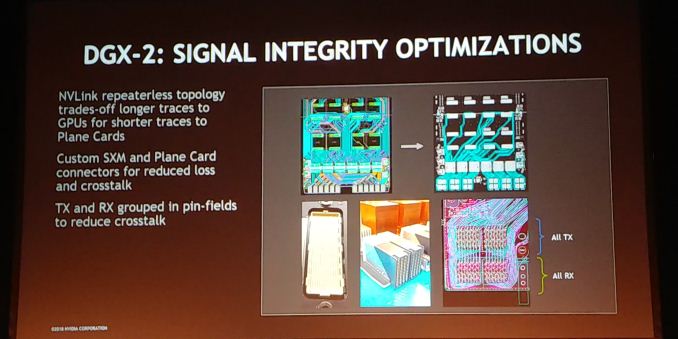 12:07PM EDT - Went from quad GPU talking to triplet switches, but did 8 to 6 with longer traces to enable low bit error rates

12:07PM EDT - makes it simpler with less tracing talk over 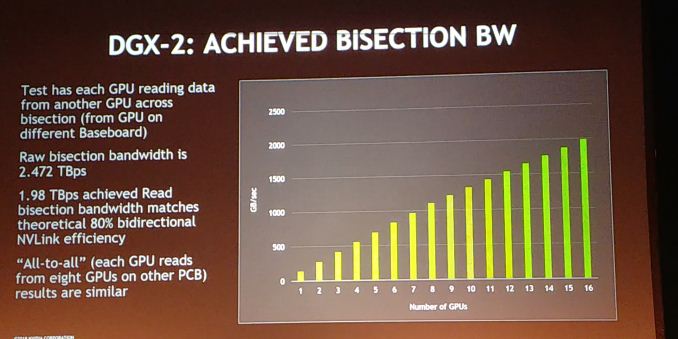 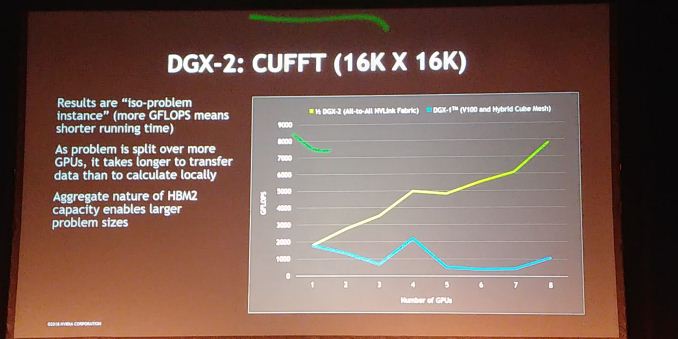 12:09PM EDT - This is a test with lots of cross-memory bandwidth requirements 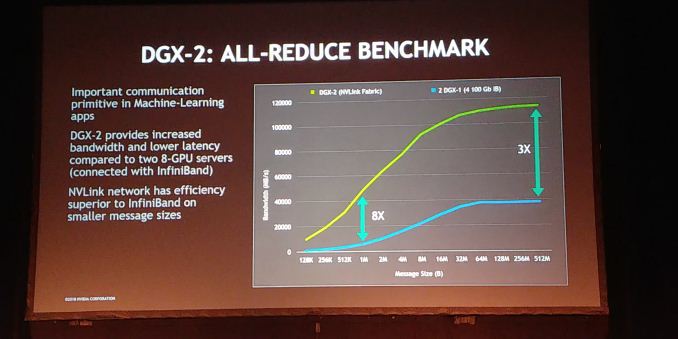 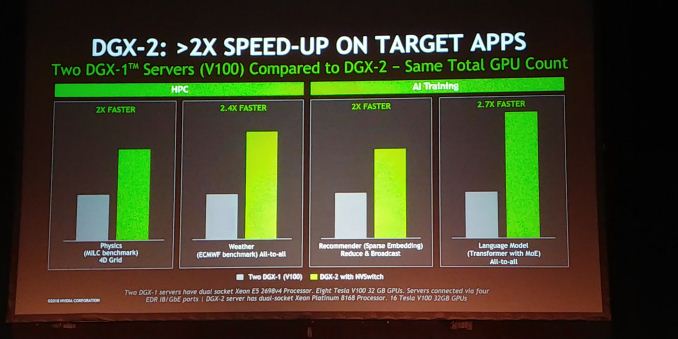 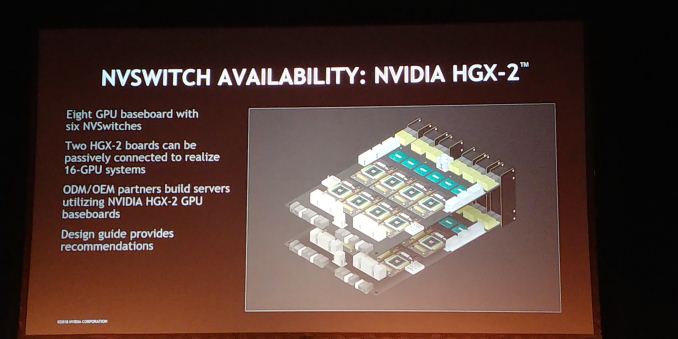 12:12PM EDT - Q: Power of ASIC? A: I've been asked not to say. Lower than you would expect - our PHYs are more efficient than average because we're in 12nm. Calculate from the area!

12:13PM EDT - Q: Why does bisectional bandwidth drop off after 8 GPUs? A: These are read operations. In order to read, it requires a request - the request has to across the board-to-board bisection. Those requests start eating into the bandwidth, but it's very linear