The ASUS UEFI BIOS, like many others, has two modes - an EZ Mode displaying more information than options to change, and an Advanced Mode where users are able to dig down to the most granular system details. The ASUS ROG BIOS use a black and red color scheme which matches the ROG branding and ends up with an easy to read layout. 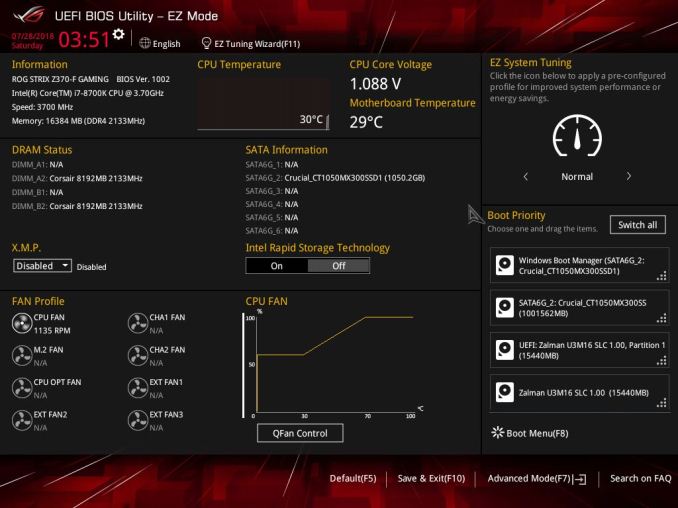 The EZ Mode screen has information about the board, such as CPU, Memory, Fan speeds, storage information, and boot priority. From this screen, we can enable XMP profiles, change the boot order, as well as adjust fans. There is even an EZ System Tuning button to enable a pre-configured overclocking profile for improved performance. Much of anything else will need to be changed in the advanced portion of the BIOS. 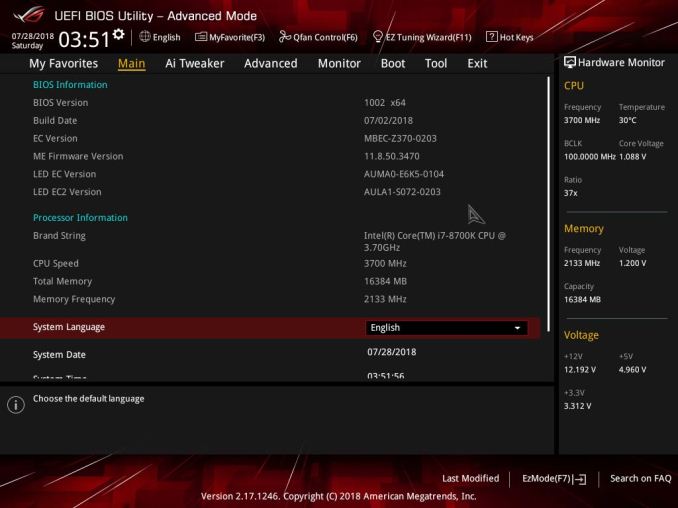 The first screen in the Advanced Mode is labeled Main. This screen also has information about the BIOS and installed processor. 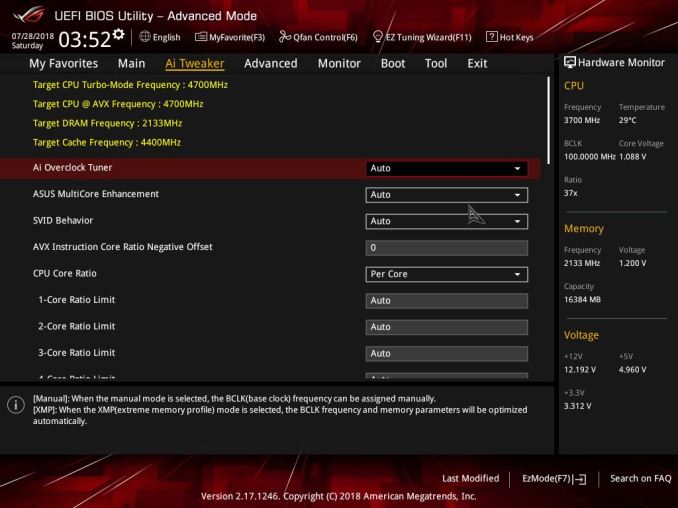 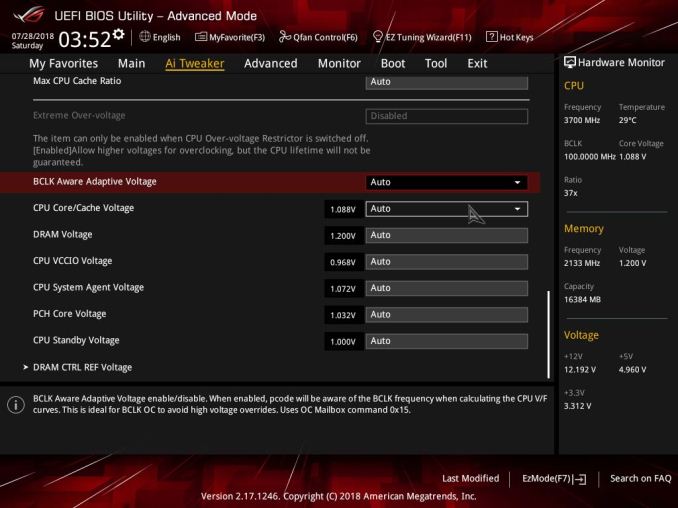 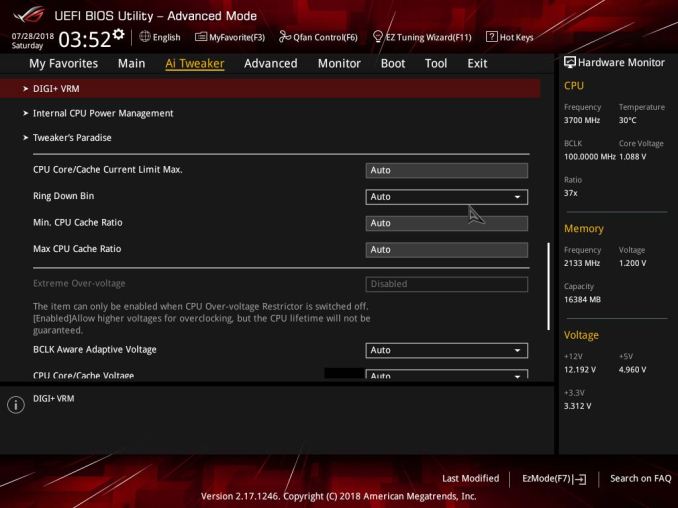 If overclocking the processor is in the plans, the majority of the time will be spent in the Ai Tweaker section of the BIOS. Any voltage from Vcore to DRAM and everything in between will be found here. One of the things I like about this layout is the vast majority of items users need to change are found on one page. There are enough options listed here and in DRAM section to make many heads spin - thankfully overclocking, for the most part, has been simplified and the amount of tweaking needed today isn't the same as a few years ago. 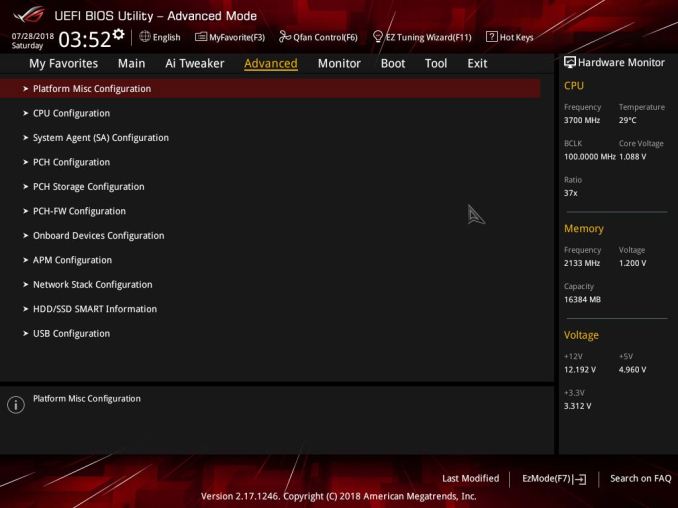 The Advanced section of the BIOS is where users are able to adjust system level functionality and configurations including CPU, System Agent, PCH, USB, and other onboard devices. 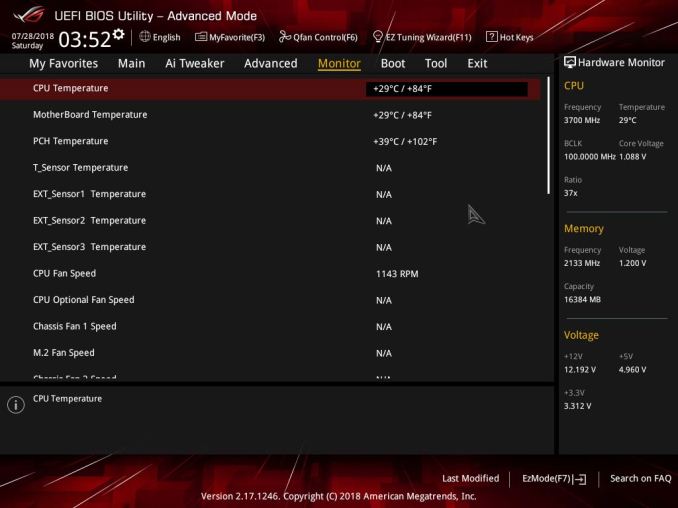 The monitor section displays information about the system temperatures and voltages from CPU and motherboard, to connected fan speeds. Within the monitoring section is where the ASUS Q-Fan can be accessed. Q-Fan allows users to set up custom fan curves to keep a balance between cool and quiet. It had zero issues working with the attached fan or the Corsair CLC setup used in these reviews. 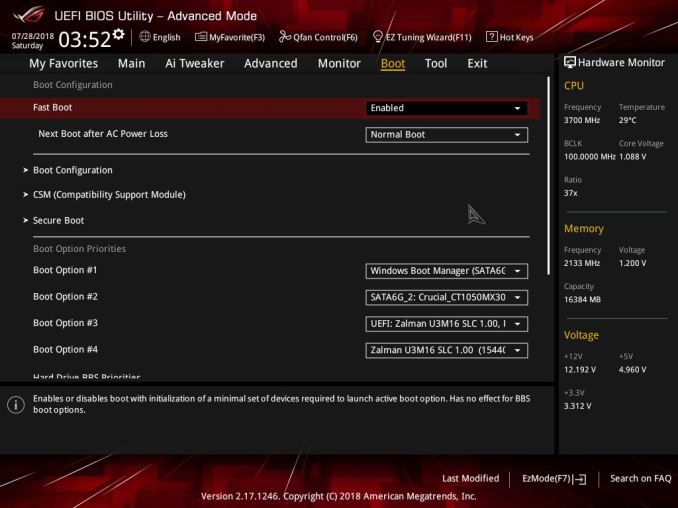 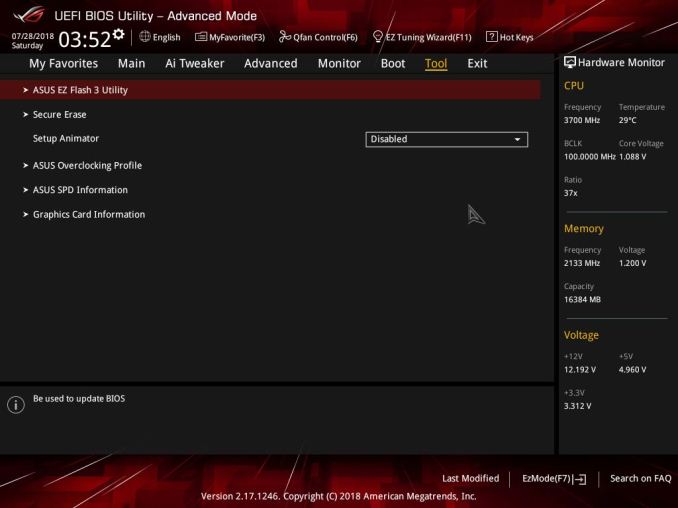 Last but not least, the Tool section. Here users are able to find items such as the ASUS EZ Flash 3 utility to update the BIOS, a secure erase function for SSDs to bring them back to their 'like new' state, a place to store overclocking profiles, as well as information about the installed memory (SPD) and video card.

All motherboards include a driver disk which contains the drivers and other software utilities for users. 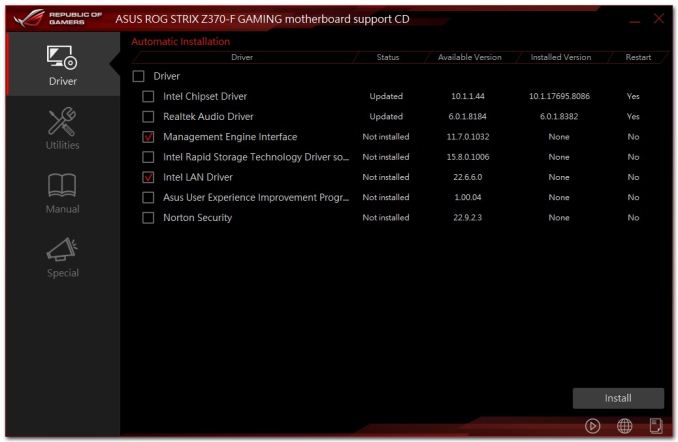 The first image seen above is from the driver disk. On the first screen, users are able to see what driver versions are installed and if there is an updated version available. I used this to download the Intel LAN driver and Management Engine Interface and did so without issue. The utilities page is where users are able to find additional utilities such as AI Suite 3, GameFirst VI, AURA Sync, and more. 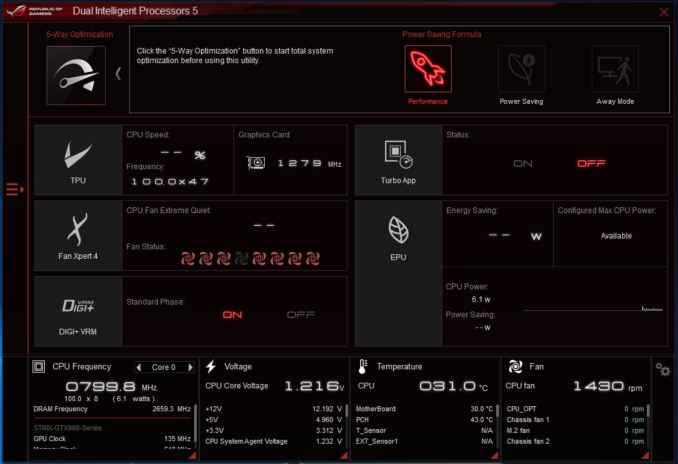 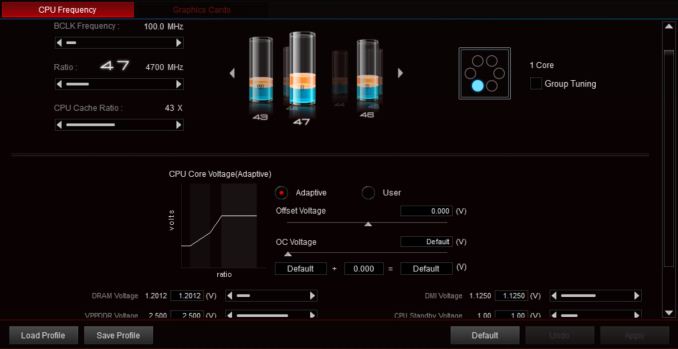 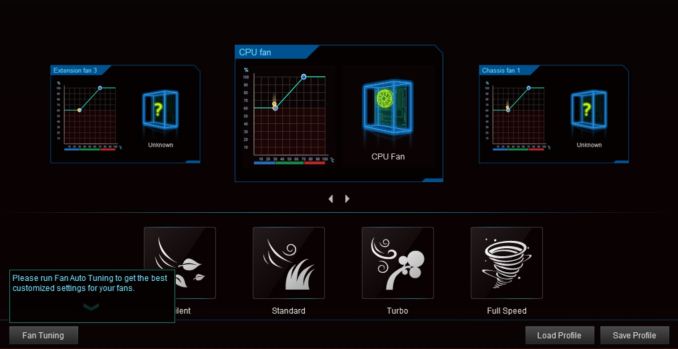 AI Suite 3 is ASUS' windows based software application able to monitor and control many facets of the PC from fan control and cooling, to overclocking and voltage control. The application has a monitoring section on the bottom that displays CPU frequency, Voltage, Temperatures, and fan speeds at a glance. I used this application for overclocking in order to save a bit of time going back and forth into the BIOS and was not met with issues. 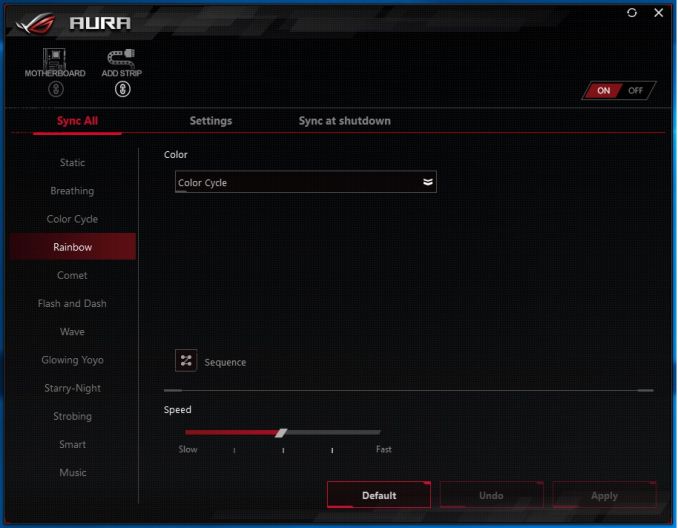 ASUS' lighting control app is named Aura and also found on the driver disk. The application is able to control the integrated RGB LED on the rear IO cover as well as any that are attached to the two onboard headers. There are 12 different lighting options to choose from as well as adjusting the color and speed of each. All in all a complete lighting application. 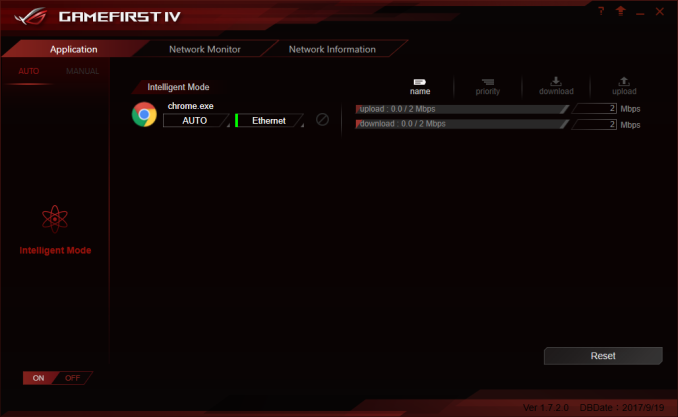 ASUS also includes their GameFirst IV software, an application designed to prioritize network traffic. This traffic shaping can be used to make sure the online gaming experience doesn't suffer if multiple items on the PC are also using bandwidth. 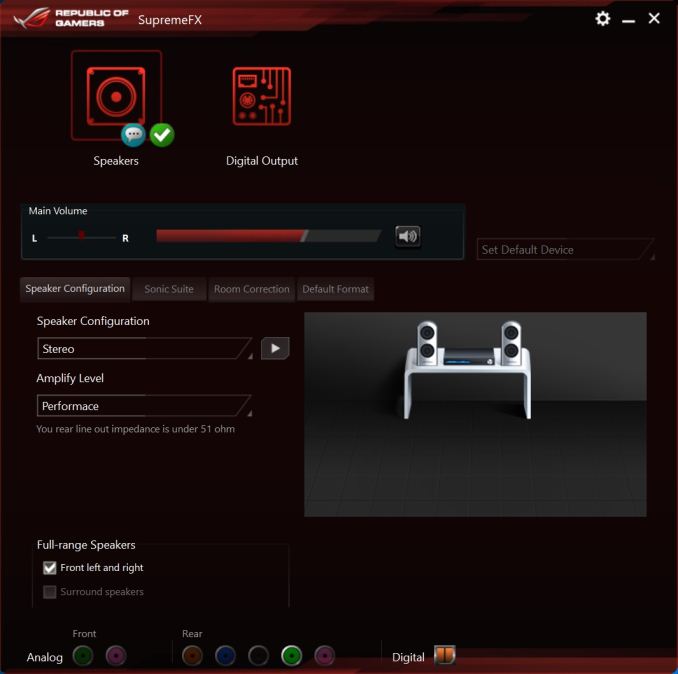 The ASUS board uses the SupremeFX S1220A codecs on this board which is based on the Realtek ALC1200 codecs. The ASUS software is ROG themed in black and red and contains all of the functions we are used to seeing such as speaker configuration, equalizer, room correction options and more. Also included is Sonic Studio III software which allows for more granular adjustments of both output and recording of audio. A fully featured audio suite. 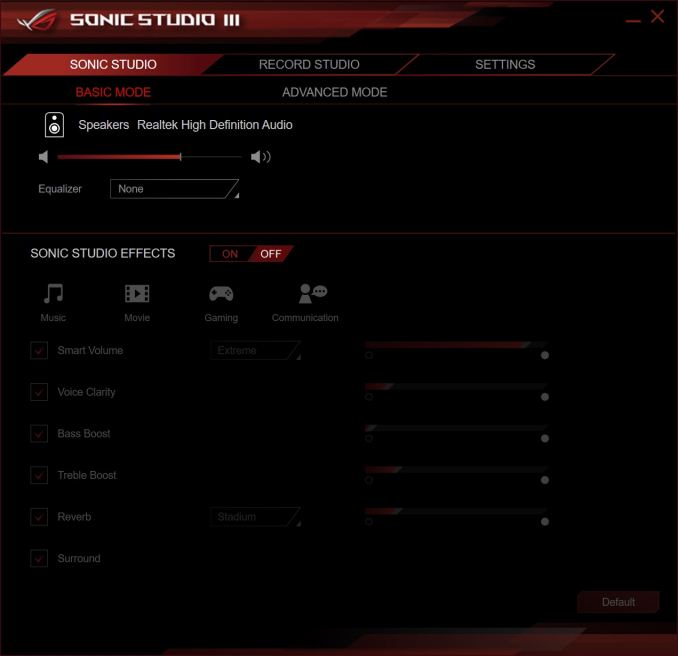