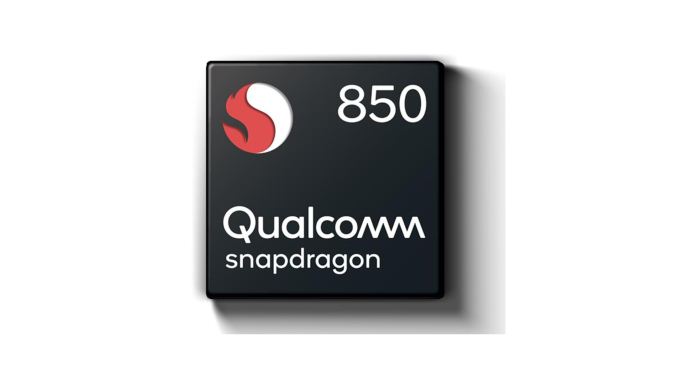 Qualcomm’s big value-add to the laptop space last year, alongside running Windows on the company’s smartphone-focused Arm processors, was both battery life and mobile connectivity, promising performance, 20+ hours of use, and the ability to always be connected to the internet without the need to piggy back on a Wi-Fi signal. This year Qualcomm is launching its second generation Always Connected PC (ACPC) platform, and the Snapdragon 850 SoC, to power the new wave of devices.

Pushing modern x86 processors out of the PC and notebook space is a monumental task. Trying to push Windows and its large user base and large volume of software out of the way requires an investment way larger than anyone realises. The alternative is to ride shotgun, and run a mix of translated and native compiled code, but a new entrant needs more than that. Having lived with x86 laptops for two decades, the most prolific home users and commercial users have their workflows embedded into their human personalities – certain software has to perform in an expected way, and as a result, disruption has to being by replacing like-for-like in order to succeed, followed by additional benefits.

Qualcomm’s ACPC platform was originally designed to do this. Run the operating system that most people use, and have a number of the top applications that people also use (such as Office, Outlook) run natively on the hardware. For users that have obscure programs built for x86, the instructions are translated for the Arm based hardware with a minimal performance drop. The benefits therein were designed to be based on battery life (lower power than x86, plus lower motherboard space requirements allowing for more battery) and mobile connectivity (integrated modem, rather than bulky external modem). These are two of the top features that most premium users are willing to pay extra for, but the goal is to have them inside mid-range and premium style devices, rather than just for the high-end (or not at all).

Last year’s ACPC platform, based on the Snapdragon 835, was launched to mixed reviews. Despite HP, ASUS, and Lenovo being partners, it took a while for each of them to get out of the door, and even then, the HP was priced very high, and the ASUS was launched only in Taiwan. Reviews of the units focused either on the higher than expected price of the HP, or the responsiveness of the system interpreted through traditional x86 benchmarks. Most reviews in that ecosystem were from x86 laptop users, unfamiliar with the intricacies of machine translation, using peak-performance x86 benchmarks on Windows, such as CineBench. The problem Qualcomm had was that users were unable to the typical operating system delays from the additional latency introduced by the translation of the chipset. With the goal being parity with the incumbent, users had an idealised view of what this should be, so when x86-focused benchmarks underperformed, negative comments resulted. Coupled with this, even fast Gigabit LTE connectivity can add additional latency to web responsiveness, whereas non-mobile connected machines that people are used to are to piggybacking from Wi-Fi with wired backhaul which has minimal latency. While the promise of battery life was there, along with always being connected, the user experience wasn’t as perfect as first envisioned, especially when it is not obvious what parts of the user experience were attributable to which company.

Compared to the S845, the S850 has additional CPU frequency in play, with the Kryo Gold 385 cores having a 2.95 GHz turbo frequency rather than 2.80 GHz. The bigger differences occur comparing the S850 to the S835 platform.

Aside from the microarchitectural updates (Kryo 280 to Kryo 385, Adreno 500 to Adreno 630), the Snapdragon X20 modem can now reach speeds of 1.2 Gbps, and Qualcomm is going to leverage the AI capabilities of their Hexagon DSP a lot more with the new platform. The new platform, according to Qualcomm, should afford an additional +30% performance, +20% battery life, and +20% wireless speeds. 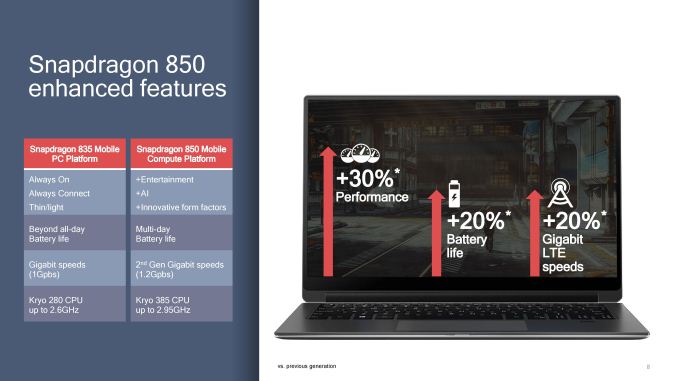 On the modem, the Snapdragon X20 LTE modem now supports licenced 10 MHz spectrum with LAA, which Qualcomm states should allow for Gigabit connectivity speeds in 90% of the worldwide LTE markets when combined with carrier aggregation technology. 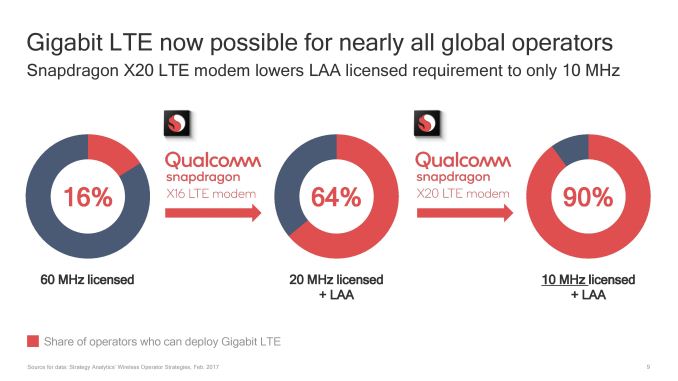 The S850 also uses the upgraded audio and video codec features we saw in the S845. This includes support for H.264 and HEVC 4K encode and decode for video playback services, and support for extended 4K video capture from integrated cameras. On audio Qualcomm is stating improved dynamic range and reduced harmonic distortion metrics on its audio codec, but no exact numbers were given. Both analog and digital audio output is supported with Qualcomm’s Aqstic and aptX technologies.

Updates to Windows on Snapdragon

For this next release, Qualcomm is keen to talk about how AI is being implemented with Snapdragon 850, along with the availability of natively compiled code without having to rely in the instruction translation layer. With the latest Windows April 2018 update, the Snapdragon based systems will be compatible with Windows machine libraries compiled for Arm based processors. At present, Cortana is accelerated using the Hexagon DSP, and other assistants are in the works to also be hardware accelerated. Microsoft Edge will also be re-optimized for the platform. 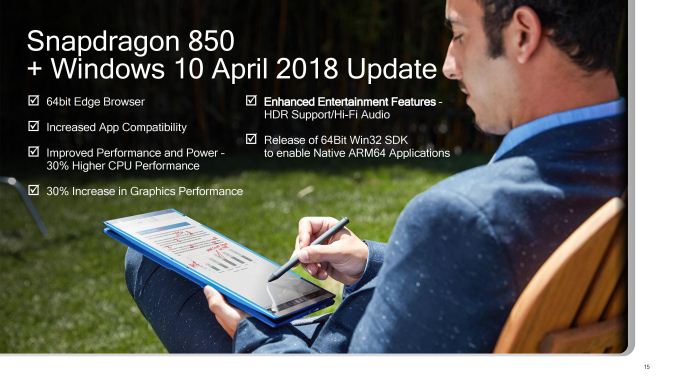 Qualcomm stated that they have been working further with Microsoft to bring RS4 to the next generation of ACPC devices, fixing a number of initial software compatibility issues that arose from the initial launch, allowing more programs to run as intended. Qualcomm has implemented a 64-bit SDK for developers looking to optimize their code, with the general mantra being that it is better to focus on native 64-bit applications on ARM rather than emulate. 64-bit emulation is still a work in progress, however Qualcomm has noted that a fair amount of software is compiled in 64-bit mode even if the program cannot take advantage of it, so the company is hoping that the 64-bit SDK can alleviate some of those edge cases. 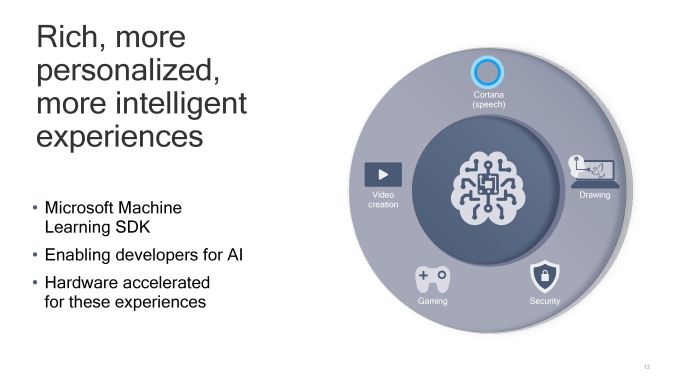 One poignant part of 2018 has been security, and Qualcomm is stating that most of the Spectre and Meltdown issues are patched with the new platform. With new Smelt-style attacks coming through the pipe, they cannot legally say ‘all’ of the issues, but there is a team of engineers in play, as with all vendors, for what will be whack-a-mole for the foreseeable future. Qualcomm states that users will be patched as new problems arise as soon as is possible.

The focus of S850-based ACPCs, according to Qualcomm, is going to shift from traditionally PC-based companies to more mobile-focused companies. HP, Lenovo, and ASUS are all expected to implement refreshes or new designs, however we were told to expect the traditional mobile companies to get onboard. These companies are more used to a yearly cadence update cycle, which combines well with the research (as published by Intel and others) that new form factor users tend to update more frequently than traditional users. No particular companies were mentioned, however we could imagine companies like Samsung, LG, Xiaomi, and Huawei might be some of them. Each company will perform their own announcements in due course. 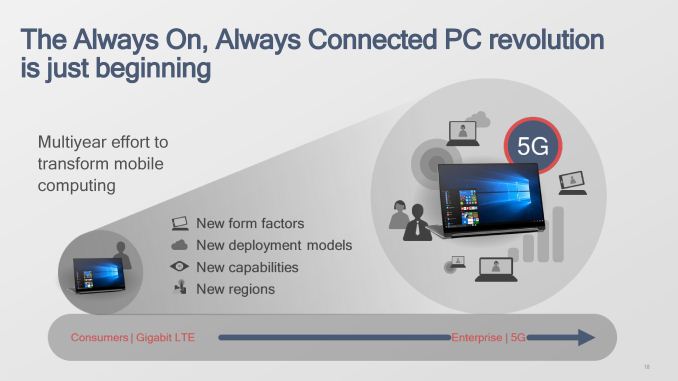 One interesting discussion point to come out of this during our discussions with Qualcomm is one of expertise. Traditional laptop makers might not have a refined skill set for designing laptop-style platforms with a focus on mobile platform-like characteristics, such as wireless carrier connectivity. It was reported in the first generation that ASUS, who has a history in smartphones and antenna placement, had a better carrier connectivity than the others, despite using the same hardware – this was down to antenna placement and chassis design.

For the new platform, Qualcomm is offering more assistance to the OEMs and vendors when it comes to reference designs and components, with one example being a reference modem design and layout. These laptop designs can, if they want, take a reference design module and implement it in their designs as-is, taking other benefits such as pre-approved carrier certification that can come along with the turn-key design. We were told, specifically with the case of the modem reference design at least, that some OEMs will be using it for the first wave of Snapdragon 850 designs, and there will be partnerships with carriers in specific regions in play for the new portfolio.

This announcement is during Computex 2018, and we might be seeing some devices using the new platform behind closed doors or actually being announced on stage. Qualcomm and its partners still have to fight the early first/second generation adoption pains that come with a re-imagined device category, however we will hopefully see a wider selection and a wider distribution this time around.

For those waiting for 5G, the smart money is likely to wait for the Computex 2019 announcements next year.