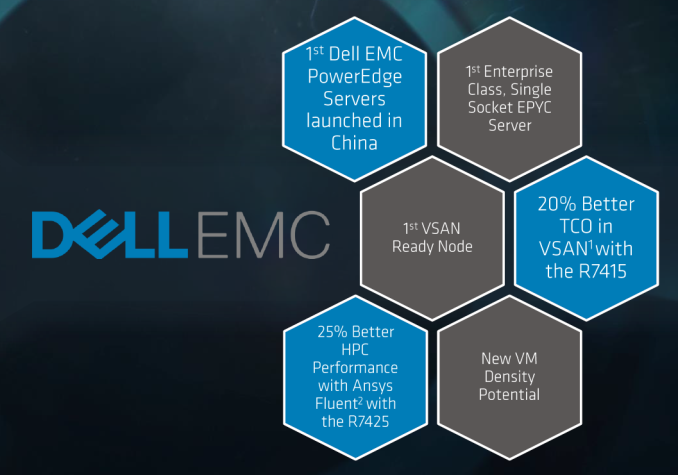 One of the many questions about AMD’s EPYC processor line related to AMD’s ability to reengage with OEMs since the Bulldozer era. Recent announcements from Microsoft Azure and Baidu have shown that at least two of the Super 7 cloud providers are on board, and today’s announcement brings Dell PowerEdge servers, powered by EPYC, into the mix.

Dell is launching three variants of the PowerEdge 14G line:

As new EPYC based servers enter the market, it is always interesting to see how OEMs are implementing the different features. This applies not only to how OEMs will route 128 PCIe lanes, but also if further expansion is needed. In the case of the R7425, Dell is using a PCIe switch in order to provide sufficient lanes for the 24 NVMe drives while also providing up to eight PCIe slots for 64 lanes. This R7425 we were told can support three double width GPUs, however it was not divulged how these GPUs are connected – if all three are on one of the two CPUs, or it happens to be split. There are many ways to design the PCIe front-end of a server like this, and there are usually trade-offs.

If there is one thing to say about AMD’s server team, it is that they love to spread news about design wins when they can. Despite this announcement being about Dell’s latest line of PowerEdge 14G servers, it was AMD who got in touch to discuss the news from their perspective. Ultimately launches like this are building on EPYC being accepted by the bigger server providers, and feed into AMD’s narrative of working closer with OEMs through 2018.