At CES 2018 in Las Vegas we had the pleasure to attend Ambarella’s booth tour demonstrating the newest products in camera SoC solutions. Ambarella to date is most widely known as being the silicon provider powering the camera capabilities of products from GoPro and DJI. As the traditional customers are looking for more vertical integration and other silicon alternatives, Ambarella is also looking to diversify its product lines and customer base. The CV1 is a major effort towards gaining track in the EVA (Embedded vehicle autonomy) space.

The CV1 is the first of a new family of computer vision processors which implement Ambarella’s “CVflow” architecture. CVflow is a new convolutional neural network (CNN) inference acceleration IP developed in-house by the Santa Clara company. Over the last couple of months we’ve seen a lot of news in terms of machine learning announcements and IP development as neural network engines become the new “must-have” feature to differentiate in terms of silicon offerings.

In CEVA’s recent NeuPro announcement I briefly addressed the fact that we’re seeing a wider spectrum in terms of CNN engine architecture implementations – on one side of the spectrum we have more programmable and (claimed) flexible DSP-like architectures, while, on the other extreme we have more fixed-function accelerators that claim higher performance and efficiency. Each company has their own view on the benefits and disadvantages of either approach, but, the general consensus I’ve noted among all of them is that it’s quite a mess in regards to marketing claims and specifications. For this reason Ambarella was quite tight-lipped when queried about the CVflow engine architecture and didn’t want to disclose any more in-depth specifications beyond the fact that they’re gravitating to less fixed-function processing with their IPs. 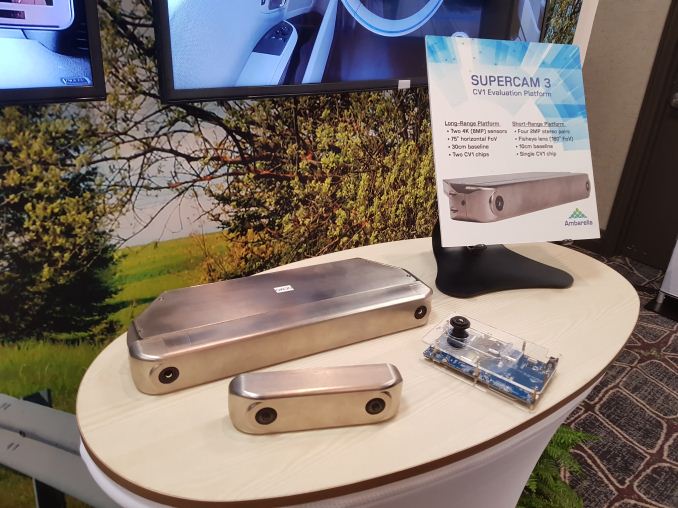 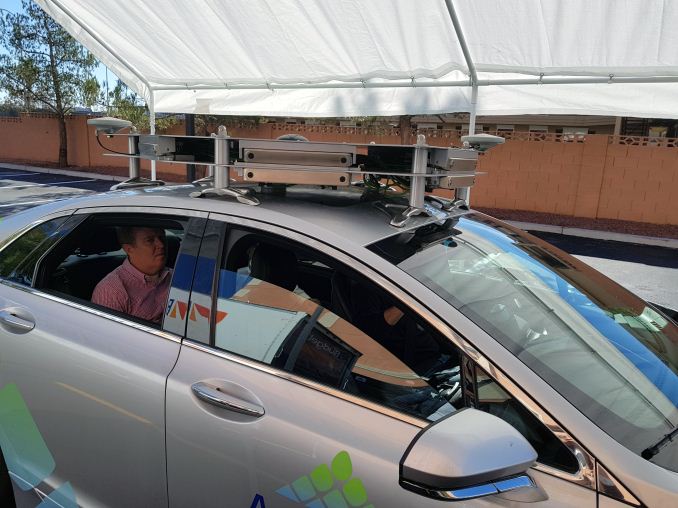 The most interesting demonstration video was the output out of a working system highlighting the live obstacle detection and object recognition. In first half of the above video we see the obstacle detection highlighted – the processing for this is done via the stereovision cameras and a disparity mapping engine of the CV1 SoC. This allows for generic obstacle detection such as cars, the curb or other random objects that the car needs to avoid when driving. The hardware block for the disparity mapping is a fixed-function IP from Ambarella and promises high performance for the task.

In the second half of the video we see the object detection highlighted. The processing for this is done via a monocular camera system and implemented via a CNN on the CVflow engine. The vision capabilities here allows the system to distinguish between different types of obstacles and objects in the scene and gives “intelligence” to the EVA system.

Ambarella also demonstrated a “SuperDrone” at the show using a CV1 platform able to fly through an obstacle course. The impressive fact here is that the drone did this autonomously without any pre-defined path beyond only target way-points programmed, and did the path calculations as well as obstacle avoidance on the fly.

The CV1 is a 14nm SoC and has been in production since last summer and includes Ambarella’s capable ISP and camera pipelines. The design is meant more for “live” imaging use-cases and doesn’t have the higher end video recording capabilities that we’re accustomed to, and that’s where the CV22 comes into play.

The CV22 is the second chip in the CVflow family. The SoC is a newer generation product and is implemented in a 10nm process. Like the CV1, these are manufactured by Samsung Foundry.

The CV22 offers the top of the line 4K60 AVC and HEVC video encoding capabilities for which Ambarella claims to have the lowest bitrates (at the same quality) in the industry through the help of SmartAVC and SmartHEVC variable bitrate controls. The ISP has a total throughput rate of 800MP/s and this can be configured and budgeted into up to 4 camera interfaces and sensors. The CVflow engine is also of a newer generation and promises 4x the processing power of the CV1 implementation. The SoC is powered by a quad-core A53 cluster for general processing capabilities.The CV22 is sampling to customers in the upcoming quarter. 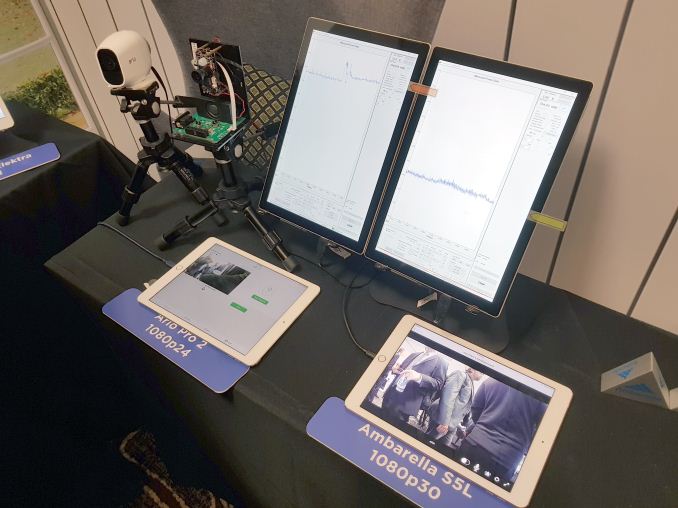 At the CES booth we also saw demonstration of existing solutions such as the S5L IP camera SoC against a commercially available Arlo Pro 2 with a competitor's SoC. The key advantage of the Ambarella solution was active power consumption as it was able to show 68% lower operating power, a massive difference considering that these IP camera platforms are targeted for battery operation.

Overall it was great to see Ambarella’s new silicon announcements at the show and I’m looking forward to see what kind of products companies will be able to develop with SoCs such as the CV22. The key take-away for me was the demonstration and application of CNNs in real-world “killer” use-cases of which we haven’t seen too many of in the mobile space… if you don’t count animoji’s of course.