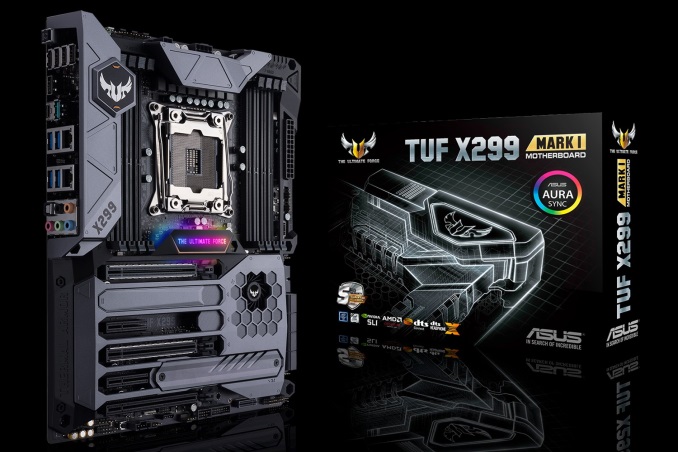 Today we have a chance to look at our first ASUS motherboard, the TUF X299 Mark 1. The Mark 1 is listed as a durable and reliable motherboard for enthusiasts and gamers. The TUF Mark 1 sits in the middle of the ASUS product stack and carries over the armor found on previous generation TUF boards and adds an updated theme and features to the latest iteration. 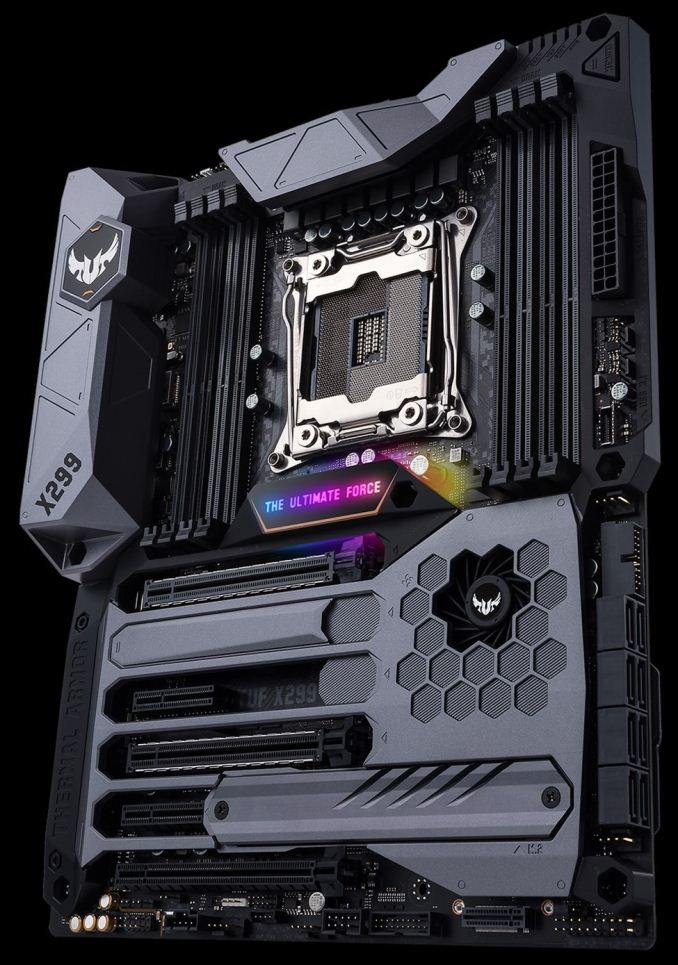 There are three reinforced full-length PCIe slots for video cards and support up to three-way SLI and Crossfire. The physical slot configuration allows for three slot GPUs to fit in the primary GPU slots as well. For storage, both M.2 slots are connected via the chipset. One of the M.2 supports both SATA and PCIe devices, while the other is PCIe only. On the SATA side, all eight ports are connected natively through the chipset. SATA ports 5/6/7/8 do share bandwidth with the second PCIe x4 slot.

The TUF Mark 1 has a phone app that connects through the included Bluetooth module to aid in debugging. In addition, the board uses Q-LEDs at the top of the board to tell where the board gets stuck during POST. The 8-phase VRM is shared across a couple of the SKUs in the ASUS lineup, including the ROG X299 Strix XE, which we will have an in-depth review on as well.

On the USB side of things, there are two USB 3.1 (10 Gbps) ports, one Type-A and one Type-C, which are handled by the ASMedia 3142 controller. The front panel USB 3.1 Type-C port managed by an ASMedia 1543 switch. The chipset delivers eight USB 3.0 ports in total, four at back panel and four via internal headers, and six USB 2.0 ports, four on the back panel and two via an internal header.

Overall performance from the X299 TUF Mark 1 was mid-pack for almost all benchmarks. Features such as Multi-Core Turbo are optional, and are offered when XMP is enabled. Overclocking was straight forward, with the board hitting 4.5 GHz similar to other products, although the 'Fast Tuning' option for auto overclocking gave a nice 4.3 GHz for all cores that was very near our manual CPU voltage. This would make a nice one-touch overclock with the right CPU.

ASUS brings a current total of eight X299 boards to choose from: the ASUS ROG Rampage VI Extreme making its home in the Republic of Gamers (ROG) enthusiast segment along with the ROG Rampage VI Apex and the ROG Strix X299-E Gaming and Strix X299-XE Gaming. The Prime segment consists of two boards - the Prime X299-A and the Prime X299-Deluxe. Last but not least the TUF lineup also consists of two boards, the TUF X299 Mark 2, and TUF X299 Mark 1. All boards are ATX or greater size so small form factor users will be forced to look elsewhere.

Overall, the product stack has a number of feature points and price crossover between the segments.

Board partners have launched dozens of motherboards on this platform, several of which we will have an opportunity to look over in the coming weeks and months.

Other AnandTech Reviews for Intel’s Basin Falls CPUs and X299

This means there are going to be some X299 boards that perform normally, and some that underperform based on BIOS versions or design decisions. We are in the process of quantifying exactly how to represent this outside of basic benchmarking, so stay tuned. In the meantime, take a look at the next motherboard for review.