BenQ Launches the SW271 Display for Professionals: 27-inch 4K with HDR and DCI-P3 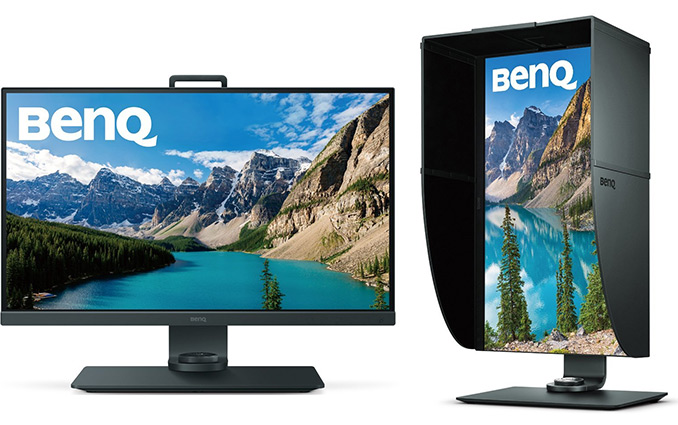 BenQ has quietly released its new SW271 professional display that features a 4K resolution panel, wide color gamut support, and HDR10 support. The monitor is a smaller relative of the BenQ SW320 launched roughly a year ago, but which has a number of significant differences - the new display is officially aimed at photographers and every unit is factory-calibrated.

The BenQ SW271 relies on a 10-bit IPS panel that can reproduce 1.07 billion colors and is listed to cover 100% of the sRGB color space, 99% of the AdobeRGB color space, and 93% of the DCI-P3 color space. Unlike the bigger SW320, the SW271 uses a LED backlighting. The other specifications of the SW271 look rather standard for a high-end UHD monitor: a 3840×2160 resolution with a 60 Hz refresh rate, 350 nits typical brightness, 1000:1 static contrast, 5 ms response time and 178° viewing angles. The 350 nits brightness is usually considered too low for HDR10, although BenQ provides a shroud for better visual acuity.

Two key features of the BenQ SW271 are its support for 10-bit HDR (with a 14-bit 3D look-up table) and individual calibration to DeltaE ≤ 2 in both Adobe RGB and sRGB. Since DCI-P3 coverage of the SW271 is below 98%-99% covered by numerous displays aimed at video editors and animation designers who do post-production work, BenQ positions the product as a solution for photographers and graphics designers interested primarily in Adobe RGB. In the meantime, HDR10 is helpful for those who work on adding HDR to photos, videos and games, so the monitor is still aimed at a broader audience than other displays for artists and designers. 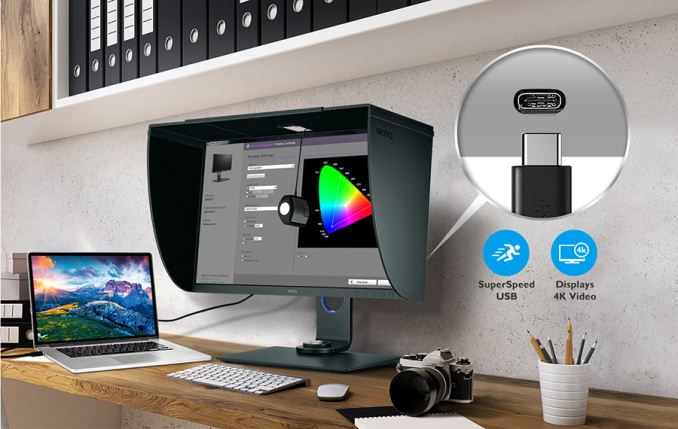 Speaking of graphics and video professionals, it is necessary to mention that the SW271 features BenQ’s Hotkey Puck that allows users to switch between Adobe RGB mode, sRGB mode and Black & White mode quickly, or perform other functions. Just like its bigger relative, the SW271 is set to display content in different color spaces simultaneously side-by-side in PIP/PBP modes (two inputs are required). In addition, the SW271 comes with a detachable shading hood to reduce monitor’s screen glare. Finally, the monitor has an adjustable stand that allows rotating the panel clockwise or counter-clockwise, tilt it, and swivel it.

When it comes to connectivity, the SW271 display has one DisplayPort 1.4, two HDMI 2.0 connectors, a USB 3.1 Gen 1 Type-C input (see compatibility list), and a headphone jack. All of the digital interfaces support HDCP 2.2 required for protected content. Besides this, the new monitor comes with a dual-port USB 3.0 Type-A hub as well as an SD card reader.

The BenQ SW271 display is now available from multiple retailers in the U.S. for around $1150, which is tangibly lower than the price of the SW320, its bigger relative, which is sold for $1499.