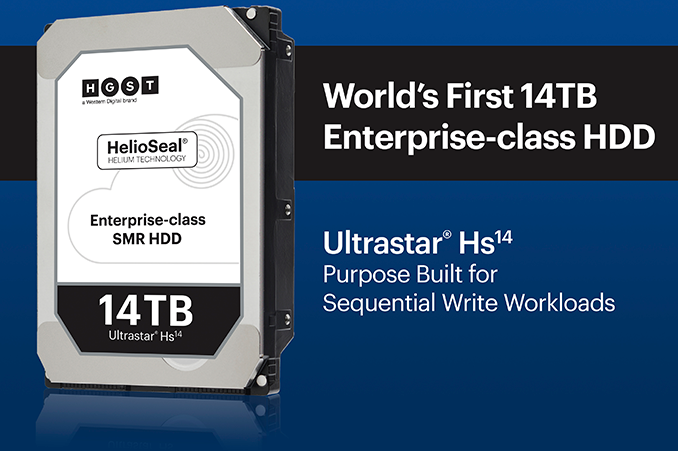 Western Digital has started to ship its new HGST Ultrastar Hs14 hard drives, promoted as being suitable for cloud datacenters and for hyperscale developments. The capacity increase from its predecessor, the Ultrastar Ha10, from 10TB to 14 TB offers a significant performance improvement. The new 14 TB HDD is based on shingled magnetic recording technology, which is a system that naturally focuses more on sequential write performance. These drives will only be available with host management, which means it will not be available to general consumers, but only to select customers of HGST.

The HGST Ultrastar Hs14 relies on Western Digital’s fourth-generation HelioSeal enterprise platform which integrates eight platters and features various internal components specially designed for such hard drives. The new helium-filled HDD has a 7200 RPM spindle speed, a 512 MB cache. and numerous enhancements when it comes to reliability and durability of the drive. As with other HGST enterprise-class HDDs, the Ultrastar Hs14 is rated for 2.5 million hours MTBF and comes with a five-year warranty. 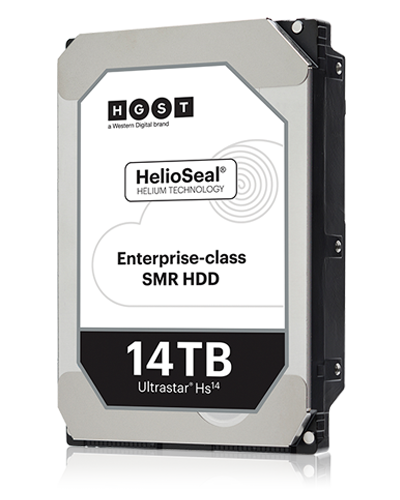 Unlike the Ultrastar He12, which is based on the same fourth-gen HelioSeal platform, the Ultrastar Hs14 uses shingled magnetic recording (SMR) and thus has a number of peculiarities when it comes to re-writing. As described numerous times here at AnandTech, HDDs featuring SMR increase their bit density by recording new magnetic tracks and partly overlapping the previously recorded tracks in a 'shingle' fashion. This process is usually suitable for sequential writes, but as multiple tracks need to be adjusted when re-writes occur, this will slow down the rewriting process

Unlike its rival Seagate, Western Digital does not incorporate any special features into the SMR-based HDDs that mitigate peculiarities of the recording technology, but requires their hosts to manage writing process on such drives. This naturally reduces addressable market of such HDDs to a relatively limited number of companies who run cloud and hyperscale datacenters and which can optimize their software for particular hardware. When it comes to the HGST Ultrastar Hs14, Western Digital explicitly says that the drive was designed specifically for sequential write environments, such as archives and content delivery networks: basically data that is not updated frequently (if at all).

The Ultrastar Hs14 drive comes with 1.75 TB platters and therefore can offer a significantly higher sustained transfer rate than its predecessor, the Ultrastar Ha10, which relied on 1.42 TB platters. Meanwhile, the improvements offered by the Hs14 vs. the Ha10 are not limited to higher areal density.

First off, the Ultrastar Hs14 comes with a 512 MB DRAM buffer for indirection table management, which is double the size of the Ha10. For sustained performance, HGST claims that the new Ultrastar Hs14 drive offers 233 MB/s read/write performance, which is a 48% increase over the Ha10 when it comes to reads and nearly 3.5x increase when it comes to writes (note that the areal density of the Hs14 increased by 24%). The manufacturer does not want to share all of its secrets but claims that with its first-gen host-managed SMR drive it had to make a tradeoff between performance and reliability which resulted in a rather low read and write speeds. In particular, the Ultrastar Ha10 performs 100% read verify of previous track after all write commands to ensure that the previous tracks was not destroyed at sequential write (due to a narrower track than a conventional PMR HDD). Therefore each write operation requires several revolutions to complete. The company called this tech “Write Verify”. Meanwhile, the new Ultrastar Hs14 no longer does 100% verification, but only does read verify a previous track when the drive sees a failure at write command. So, if there are no write failures, the drive moves to next track write and therefore has an improved write performance (and since it does not have to perform a read operation, its read speeds are also higher). The company calls the new tech “Intelligent Write Verify”. Since the Ultrastar Hs14 works differently than the predecessor, the new drive also reduces average read seek time to 7.7 ms, down from 8.5 ms in case of its predecessor.

Since the HGST Ultrastar Hs14 HDDs are aimed at customers with software optimized for SMR, the first clients to be interested in the new drives will be operators of cloud and hyperscale datacenters who already run the Ultrastar Ha10 hard drives. For them, the new drives open up an opportunity to increase their storage capacity by 40% without increasing their power consumption, without expanding the footprint of the datacenter, and changing other hardware.

Western Digital is currently sampling its HGST Ultrastar Hs14 with select OEMs and is qualifying them with customers. It will ship them commercially when its clients demand the new 14 TB HDDs. Regular consumers will not be able to buy the new Ultrastar Hs14 HDDs and will not be able to take advantage of it until mainstream operating systems learn how to 'host-manage' SMR drives. In the meantime, WD Gold drives of 12 TB and 10 TB capacities are available from retailers like Amazon and Newegg.