Windows 10 Anniversary Update came out at the beginning of August, with plenty of new user-facing features. There were also plenty of changes under the hood as well, including a change in policy regarding how Windows 10 handles device drivers.

When the 64-bit versions of Windows launched over a decade ago, as a security measure Microsoft decided to require that all kernel mode drivers must be signed to be loaded. Under the aptly named cross-signing requirement, hardware vendors would need to get a certificate from one of the major certificate authorities, and use that to sign their drivers. The idea being that by enforcing signing restrictions, it would be much harder for malware to masquerade as legitimate drivers.

This however didn't go quite as well as planned. In particular, malware authors begun stealing driver signing certificates from hardware vendors, allowing them to distribute malware that was for all practical purposes authentic as far as the operating system was concerned. As a result, when Windows 10 initially launched, Microsoft decided to take things one step further and require that not only would kernel mode drivers need to be signed, but that they would need to be WHQL signed by Microsoft.

With that said however, Microsoft's plans hit a snag. There were technical complications to this decision, as well as a problem with the ecosystem being ready for this change. So for Windows 10, WHQL signing was a policy statement and not something that was enforced.

Now with the rollout of the Windows 10 Anniversary Update (version 1607) this policy is no longer just policy, but an enforced requirement: in a fully secure x64 system, all kernel mode drivers must be signed by Microsoft. But, as with all rules, there are exceptions. The new requirement does not affect anyone who has upgraded from a previous build of Windows 10, and therefore it only affects new clean installs of Windows 10 1607. Furthermore the policy is only enforced if Secure Boot is enabled, so for those that require the ability to run traditionally (non-Microsoft) signed kernel mode drivers, one possible work around is to disable Secure Boot. As a backwards compatibility measure, Microsoft is also allowing the installation of drivers signed with end-entity certificates issued before July 29, 2015 which are signed by a supported CA. Finally, to prevent boot issues, boot drivers will not be blocked at this time, but the will be blocked in future versions of Windows. 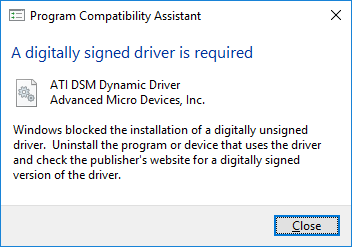 Getting to heart of matters then, the additional signing requirements for Windows 10 piqued our curiosity on driver compatibility, and as a result we've gone and taken a quick look at how this change impacts the average user. In practice, it shouldn’t impact very many people at all, as many hardware vendors only ship WHQL (Microsoft signed) drivers to begin with. But there is one particular segment of hardware manufacturers that still semi-regularly release non-WHQL drivers, and that's the GPU vendors. Both AMD and to a lesser extent NVIDIA periodically release beta, hotfix, and other types of drivers that aren't WHQL signed. The obvious question then is raised: will users still be able to run these non-WHQL driver releases under Windows 10 Anniversary Update?

To answer that question, we reached out to both companies for comment, and while only NVIDIA got back to us, they are not too concerned:

"All of our Game-Ready driver releases are fully WHQL certified, so this shouldn’t significantly impact GeForce users at all." - NVIDIA Spokesperson

As NVIDIA only releases the occasional non-WHQL hotfix driver, they are less likely to be impacted to begin with. And indeed, they haven't had a hotfix release since before the release of Windows 10 Anniversary Update. AMD on the other hand has had a couple such releases, so we decided to simply see what would happen if you installed a non-WHQL driver release on a Secure Boot enabled system. 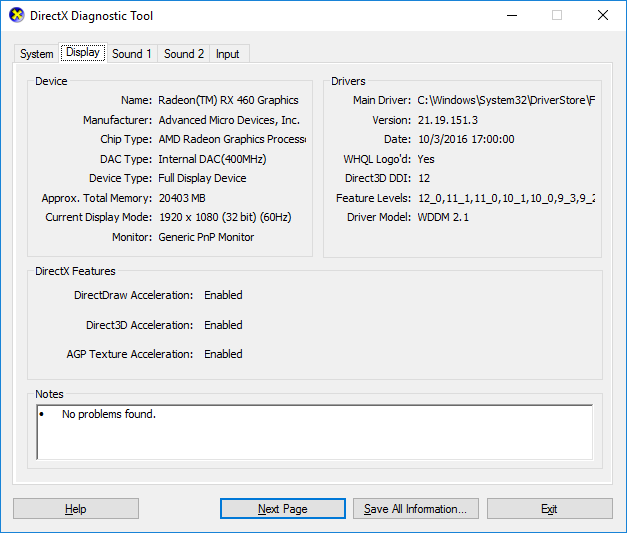 As it turns out, even AMD driver releases marked as non-WHQL are still sent to Microsoft for signing. And as a result they install on Windows 10 Anniversary Update just fine. Now to be technically accurate, AMD could always ship an unsigned driver if they deem it necessary. But as we can see, some thought has been put into this, and the company isn't releasing any drivers that won't install under Windows 10 Anniversary Update. Nor, do I expect that NVIDIA would ship unsigned hotfix drivers either.

The net impact to the average user then is essentially zero. Having drivers that are signed by Microsoft but not fully WHQL does blur the line between what is and isn't really WHQL. But because all drivers are being signed regardless of WHQL status, it means that non-WHQL drivers are just as usable under Windows 10 Anniversary Update as they were before with the original release of Windows 10. This, ultimately, was the conclusion we expected to find. But it's nice to be able to confirm what we've already suspected.