Looking at the overall design for the Acer S7 reveals that not a lot has changed since 2013. The overall look and feel is almost identical to the original S7. That’s not necessarily a bad thing either, since the original S7 was always a great looking laptop. Acer has kept the Gorilla Glass on the top of the lid, with a white finish behind it which makes for a great look. 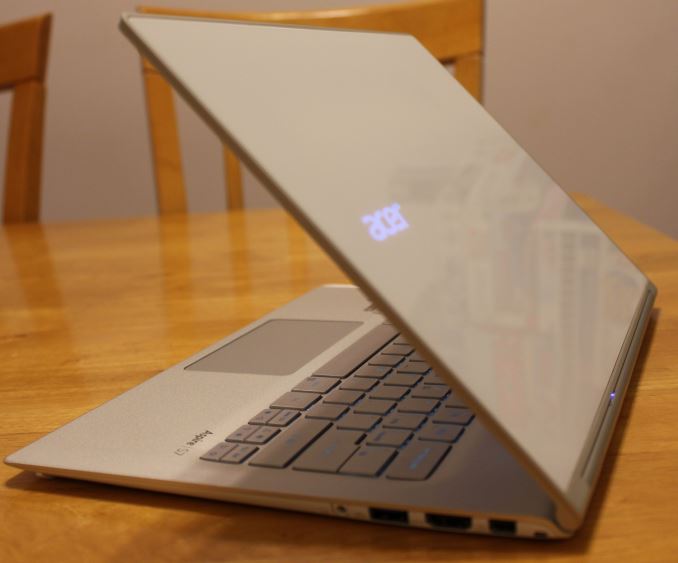 The laptop is also very thin and light at just 12.9 mm thick, or 0.51 inches. It weighs in at 1.33 kg or 2.93 lbs. This makes it just 0.6 mm thicker and 0.3 lbs heavier than the ASUS UX305, which is a Core M powered notebook. Considering the Acer has full dual-core mobile Core i7, this is a pretty impressive feat especially since it has basically been carried over since 2013. 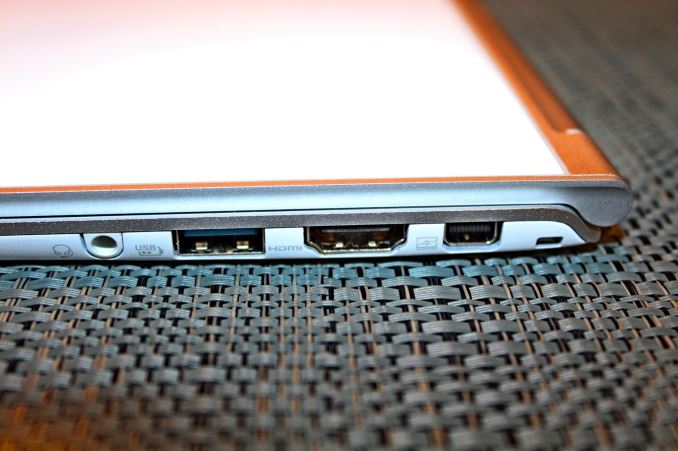 The sides of the laptop have a nice sweep to them that looks great. Here we can find the two USB 3.0 ports and the SD card reader, along with the power input and power button. Other than adding another USB port which would be nice, it would be great to see Acer move to a more robust power input. The tiny barrel connector feels like it won’t last over the long haul. The power button could also be moved, since I found myself accidentally turning the notebook off when going to unplug it, since the power button is right at the power jack. There is plenty of space on the keyboard deck to add a power button. 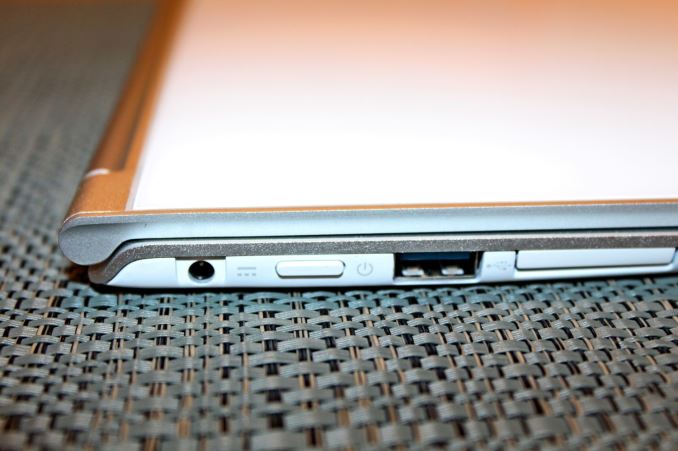 Opening up the laptop shows off its aluminum deck, with silver keys. The deck feels great as most aluminum devices do, and Acer has a nice design element of the edges of the deck wrap upwards which is a nice effect. Luckily this does not carry through to the front of the notebook which is chamfered down so the edges don’t dig into your wrists when you type. This can be an issue on some aluminum notebooks. Acer has done a decent job here but there is still a bit of an edge which is uncomfortable. 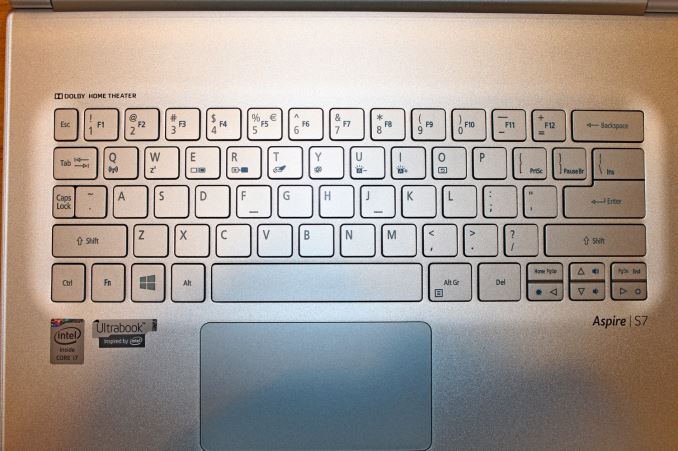 The keys and layout are also carried over pretty much exactly from the 2013 model. I have the exact same complaints as Jarred did on the original version: key travel is very shallow, and key feel is not great. For some people they will not be concerned with this, but mushy keys are something I don’t enjoy. Acer has also kept the same compressed key layout, and is missing the top row of function keys. Not only does this mean your standard F keys are not as easily accessed, typical interactions such as changing the volume or display brightness have been moved into the normal keys. It also means the Delete key is down by the space bar, and Escape has been pushed down to the number row, displacing the ~ key which not fits in a half width key with caps lock. While it is very possible that someone will come up with a keyboard layout which is better than the standard layout, I have yet to find it. Acer has lots of room to fit a fifth row of keys on the S7 so I wish that they would.

Another issue with the keys is that they are silver keys on a silver base. With the backlighting off, the keys characters are black and easy to read, but if you have the backlighting on and it’s not a dark room, the light green backlight can cause some loss of contrast with the keys. This is an issue that pretty much all silver keyed notebooks have and it is one of the main reasons I prefer darker key colors. 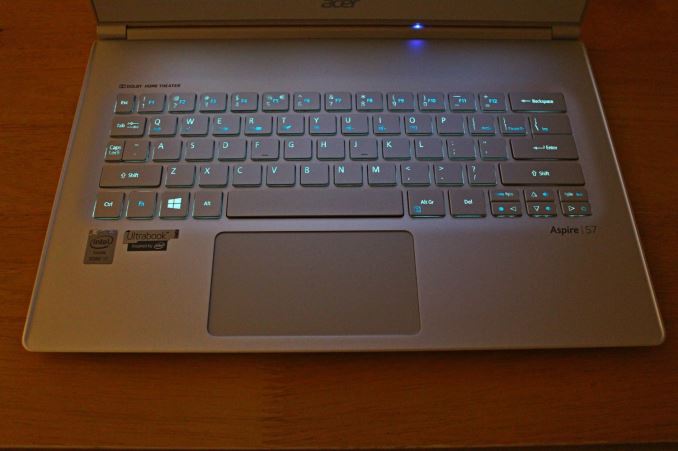 The trackpad at least has been very good to use, and it offers full customizability through the Synaptics software. Gliding your finger over it is effortless and I’ve found the trackpad to be accurate and have not had any issues with taps or gestures not being recognized. It’s still too bad that in 2015 this is not always the case.

One thing that I really like about Acer’s design is the hinge. The Acer Aspire R 13 also had the same dual torque hinge, and it is something that all notebooks should work towards. The effort to open the notebook is much easier at the start, and once the display opens to about 90° it tightens up. This makes it a lot nicer to use with touch since you get less of a chance of the screen moving on you. While this one is not quite able to be opened with one finger like the R 13, this is likely more due to the light weight of the S7. Sometimes it is the little things, and Acer has done a nice job on their hinges. 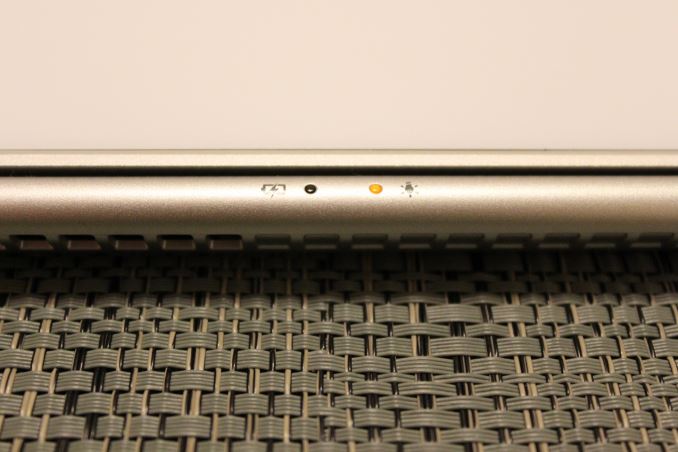 The bottom of the S7 is white plastic. I have no issues with this, and it can actually help when using the device in your lap since the plastic won’t get as hot as an aluminum base can.

Overall, Acer’s S7 design is still holding up after a couple of years. It is one of the thinnest Ultrabooks around that still offer full Core i7, and the glass top makes for an elegant look. If Acer could address the keyboard in a future model, it would go a long way to making this S7 feel like the premium device it should be.