In recent times we've seen a tremendous improvement in smartphone and tablet display quality. It began with high end flagship phones, and eventually trickled down to more budget oriented smartphones. Even a $130 smartphone like the 2015 Moto E can have a decent IPS display. However, I'm hesitant to describe the Zenfone 2 as a "budget" smartphone. While I don't mean for the word to have negative implications, it's often interpreted as meaning low quality or cheap. The Zenfone 2 is better described as an inexpensive smartphone. Much like the OnePlus One did when it was released, the Zenfone 2 offers some very serious hardware at a price much lower than what has become the going rate for flagship smartphones.

The display in the Zenfone 2 is a 5.5" 1920x1080 IPS LCD panel. This is another specification that you would expect to see in a $650 flagship device that is instead inside one that starts at $199. While phones are now moving to 2560x1440, on RGB stripe panels I don't feel that there are significant benefits to moving past 1080p even on 5.5" displays. On top of that, a display's resolution is just one of many attributes that contributes to its quality. Color accuracy, brightness, and contrast are all important aspects of a display. To accurately characterize these areas of display performance, we use SpectraCal's CalMAN 5 software and X-Rite's i1Pro 2 spectrophotometer. 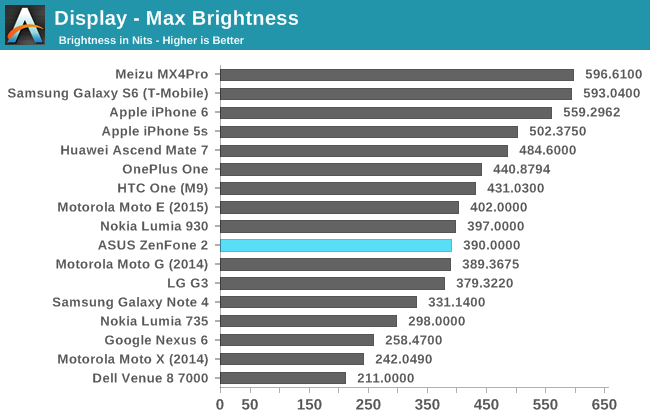 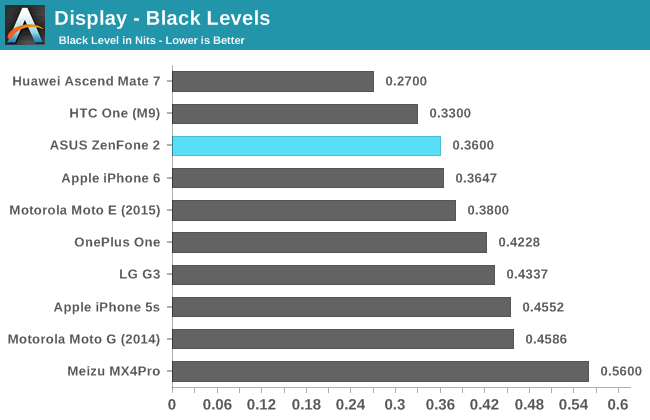 The Zenfone 2 appears to be off to a good start. Black levels are very low among our LCDs, and the max brightness is somewhat low but not terrible by any means. I never had any issues when using the Zenfone 2 outside, although it was definitely not as comfortable as the Galaxy S6. 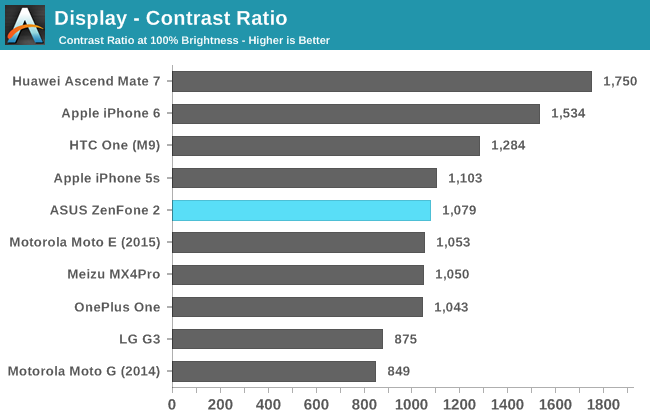 The slightly low max brightness and above average black level results put the Zenfone 2 right in the middle of our LCD devices when it comes to contrast ratio.

Unfortunately, these numbers are somewhat misleading. This is because the Zenfone 2 makes extremely heavy use of dynamic contrast and contect adaptive backlighting (CABC). I have never used another device with such dramatic shifts in backlight power. The best example I've found is when switching from an all black to all white screen at max brightness. While this is obviously an extreme case, it illustrates the behavior that is occuring very well. At the moment you switch to white, the brightness of the display is around 170 nits. Over the next few seconds, that brightness rapidly increases to the 390 nits you see in the results above. This is an enormous jump in brightness, and it's very easy to see with your own eyes.

One last thing I'd like to note about the brightness is that the 100% setting on the built in brightness slider is not actually the max brightness that the display is capable of. The max you can achieve using the slider in the Settings app is 319 nits, which is around 82% of the 390 nit result you can get using applications like Brightness Adjuster from Google Play. 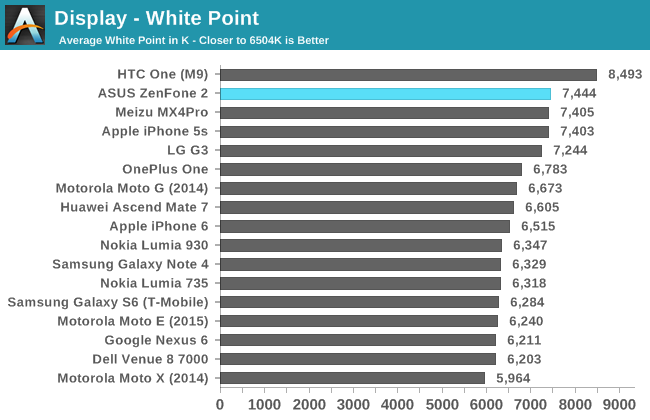 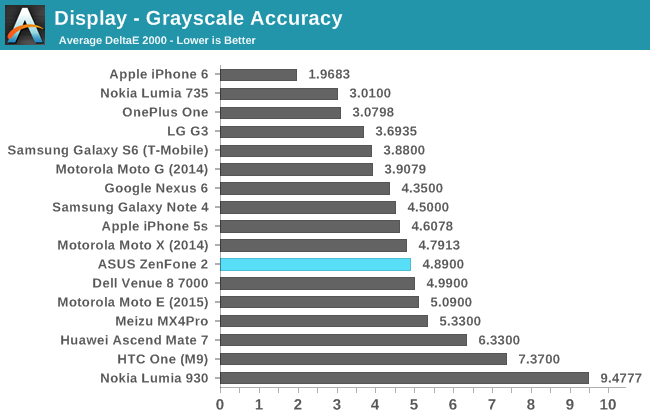 Greyscale accuracy on the Zenfone 2 is very average. The display is too blue, and this can be seen in the reproduction of shades of grey as their brightness goes beyond 15%. The gamma is also extremely irregular, and continually curves upward. This is the result of ASUS's heavy dynamic contrast and CABC. The brightness reductions with darker shades makes the display slower to move out of the shadows, which you can see in the color comparator chart above. Again I must reiterate that the color comparator is a relative color difference, as the bottom half which displays the "target" colors will be impacted by any inaccuracies in the display you use to view it.

Unfortunately, there's not much that can be done to improve greyscale accuracy when CABC is used heavily. Testing with constant APL patterns to try and avoid the brightness shifting did bring the gamma down to 2.4, but because the display still has a blue shift and the gamma is still too high, the average greyscale deltaE was around 4.5 which is still fairly high. 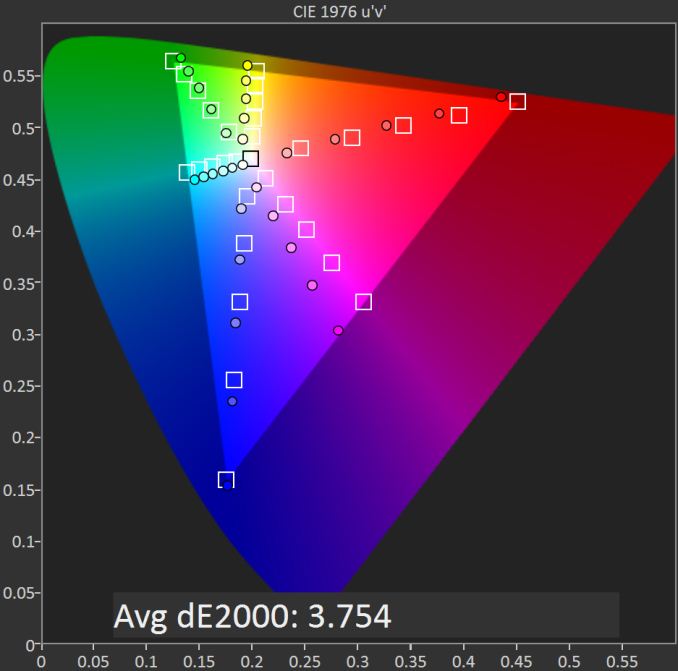 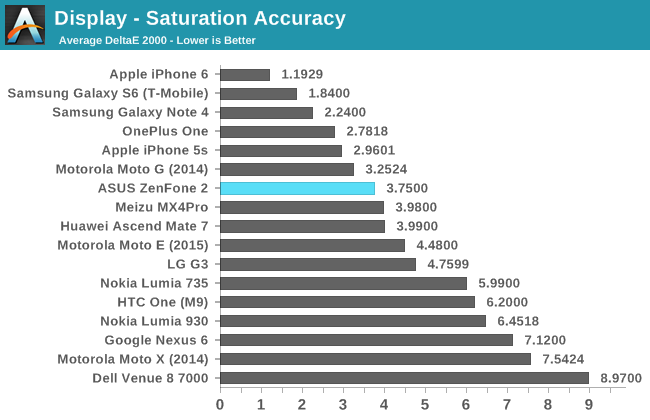 Saturation accuracy ends up being noticeably better than greyscale accuracy on the Zenfone 2. Blue and green manage to stay below the dE target of 3 for all saturation levels, while all the other colors hover somewhere between 4 and 6 on average. An average deltaE across all colors of 3.754 is not terrible by any means, and I don't think Zenfone 2 buyers will have any complaints about the accuracy of primary and secondary colors. 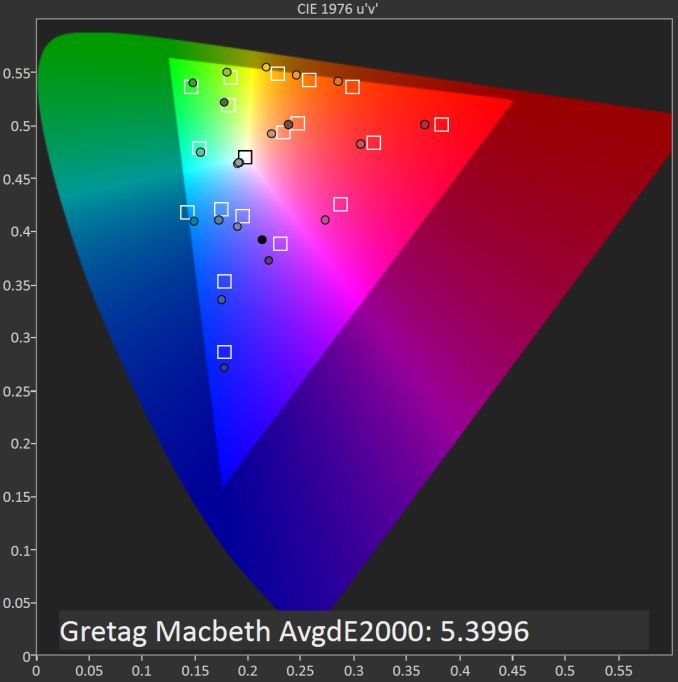 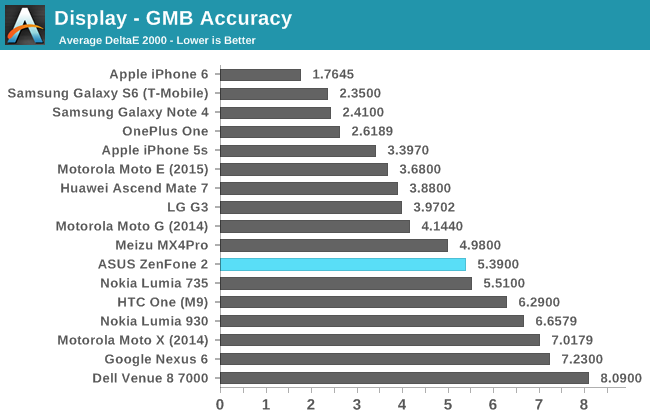 Unfortunately, the inaccurate greyscale and gamma of the Zenfone 2 comes back to haunt it in the Gretag MacBeth ColorChecker test. This test measures the accuracy of various color mixtures that are common in the real world, and the Zenfone 2 misses many of them by a significant degree. What's even more unfortunate is that the highest errors are in mixtures of yellow in red, with the largest error of all the colors tested being light skin tones. If there's one color I want a display to get right, it's skin tones.

The overall display performance of the ZenFone 2 is mixed at best. I'm glad it basically has the full sRGB gamut, and is fairly accurate with saturations of primary colors. However, it doesn't do very well when it comes to shades of grey, and it also has slightly lower accuracy with color mixtures than I had hoped. Devices like the 2015 Moto E show that it's possible to get close to that dE error target of 3 even on an inexpensive smartphone. I would still say that the ZenFone 2 has the best display at this price point purely on the merit of its pixel density, but I really wish that the calibration was better than it is.