Yesterday the Blu-ray Disc Association formally completed the Ultra HD Blu-ray specification. The specification has been under development for some time, with the first information about it being released in September of last year. The new specification allows for higher resolutions, a greater range of colors, and larger capacity disks in order to store a new generation of Ultra HD content. 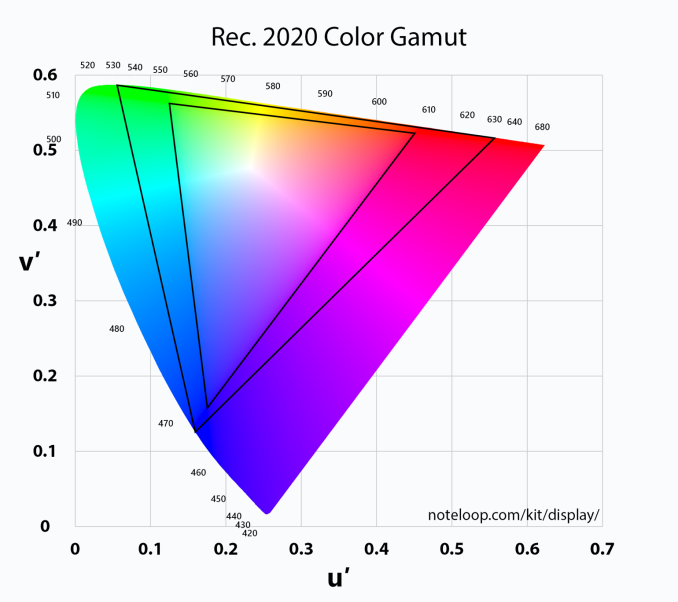 In my view, the most important aspect of the BT. 2020 standard is the use of the Rec. 2020 color gamut. The color gamut that has been used for basically all picture and video content for quite some time now is called Rec. 709 or sRGB. sRGB is actually quite a narrow gamut, and has an lower overall number of colors than even the NTSC (1953) gamut that was used for video content before it. The Ultra HD specification uses the much larger Rec. 2020 color gamut, which will allow for colors of greater saturation to be reproduced. You can see this in the image above, with sRGB being the smaller triangle, and Rec. 2020 being the larger triangle that surrounds it.

In order to support the larger Rec. 2020 color gamut without introducing color banding, a higher bit depth is required. This is because a greater number of discrete colors will be required to display gradations that span a greater range of saturations. Ultra HD Blu-ray supports 10bit per channel color depth for content that uses Rec. 2020 for its color encoding. This moves the number of possible colors that can be displayed from approximately 16.7 million to 1.07 billion. I think it would have been better to use 10bit color for sRGB content and 12bit color for Rec. 2020 content, as current 8bit sRGB content can already experience noticeable color banding, but it looks like the additional space and hardware support required have not been deemed worth it.

While the new Ultra HD Blu-ray standard supports the existing 50GB capacity for Blu-ray disks, there will be disks of greater capacity for content that requires higher bitrates. 50GB disks will have video encoded at up to 82Mbps, while 66GB disks can support up to 108Mbps, and 100GB disks support 128Mbps. In order to encode videos with these high resolutions, bitrates, and greater color depth, Ultra HD Blu-ray will make use of HEVC video encoding.

While the appeal of physical media such as Blu-ray is in decline due to the rise of streaming media, it's still the go-to for users who care about having the highest possible visual quality. It will definitely take time for Ultra HD Blu-ray to be adopted in the market, and possibly longer for Ultra HD TVs that actually support the Rec. 2020 color space. It will be interesting to see where the market for movies and TV shows moves in the future, and what position physical media will be in at that time.