As part of the CES cavalcade of announcements, after launching Core-M back in September, Intel is formally releasing their next element of the 14 nanometer story: Broadwell-U. As the iterative naming over Haswell-U suggests, Broadwell-U will focus on dual-core 15W and 28W units from Celeron to Core i7 using 12 to 48 ­execution units for the integrated graphics. A Broadwell-U processor should drop into any existing Haswell-U equivalent design (i3 to i3) due to pin and architecture compatibility, albeit with a firmware update.

As with any node change, the reduction to 14nm affords the usual benefits: more transistors per unit area, lower power consumption for a given design, or the potential to increase performance. Ryan covered the details of Intel’s 14nm architecture back as part of the IDF launch, as well as a good deal of the Broadwell architecture itself. The launch today is in essence a specification list with a few extra details, along with potential release dates for Broadwell-U products. The CPUs are already shipping to partners for their designs.

There will be several combinations possible throughout the Broadwell line, but the most important distinctions are:

The graphics move up to Generation 8, and a lot of architectural detail into this was given by Intel and IDF San Francisco in September 2014 of which some of the important points are highlighted here.

Without further delay, the list of the new processors is as follows:

The Core i3 15W SKUs have an odd combination involving 23 EUs rather than the 24 EUs that the die is designed with, presumably in order to keep yields higher it gives Intel a chance to still sell those with a single defect. This produces a lop-sided EU design within the configuration, which has its own implications, and we are requesting more detail from Intel as to how this is managed in the firmware.

A positive point for 6x00 series graphics SKUs is the memory compatibility on LPDDR3, with these units (having an 5 or an 8 in the 00x0 name) allowing 1866 MHz memory. As our previous Haswell desktop memory testing has shown a small bump away from 1600 MHz DRAM can give a good performance boost when it comes to graphics, especially when the memory speed between CPU and DRAM is the main bottleneck. I would be interested in exploring the difference with this for sure.

It might come across as somewhat surprising that a 15W CPU like the i7-5650U has a 2.2 GHz base frequency but then a 3.2 GHz to 3.1 GHz operating window, and yet the i7-5557U has a 3.1 GHz base with 3.4 GHz operating for almost double the TDP. Apart from the slight increase in CPU and GPU frequency, it is hard to account for such a jump without point at the i7-5650U and saying that ultimately it is the more efficient bin of the CPUs. So while the 28W models will get the glory in terms of performance, there are a number of models that can offer just under that performance but for just over half the power rating. This obviously levels battery life for the more efficient design as a significant jump, depending on how the system as a whole is used.

The Dies and Packaging 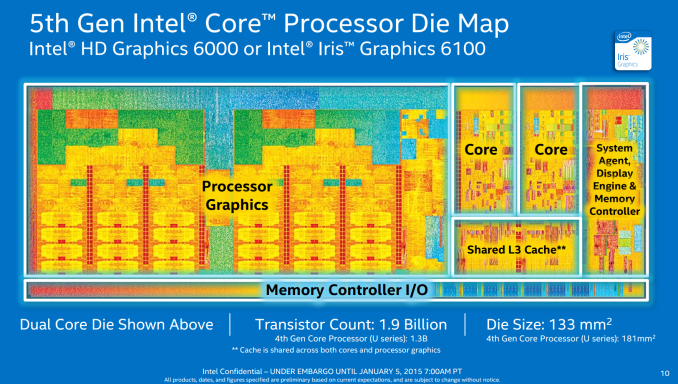 Unfortunately calculating the increases for separate parts is a little more difficult than just comparing numbers due to the different elements of the new graphics, known as Intel Gen 8.

In terms of the packaging for the dies, we also have some shots of those to share: 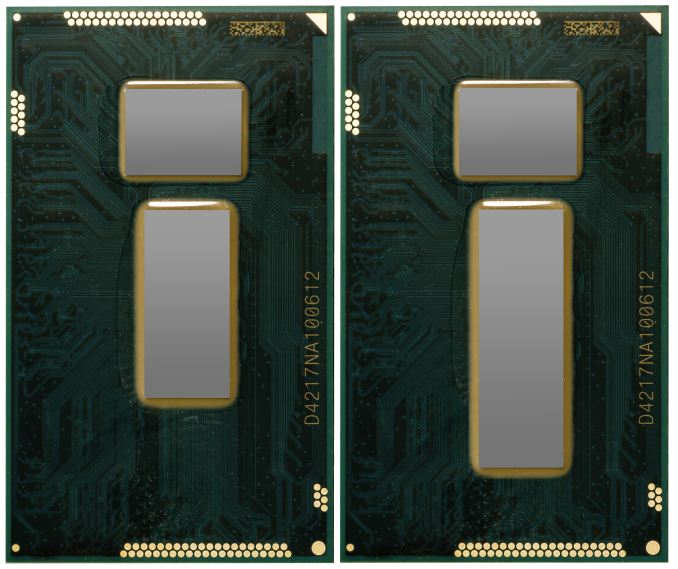 On the left is the 2+2 configuration, giving two cores and GT2 (24 EUs), while on the right is the 2+3 package. The silicon on top is the Platform Controller Hub, discussed later.