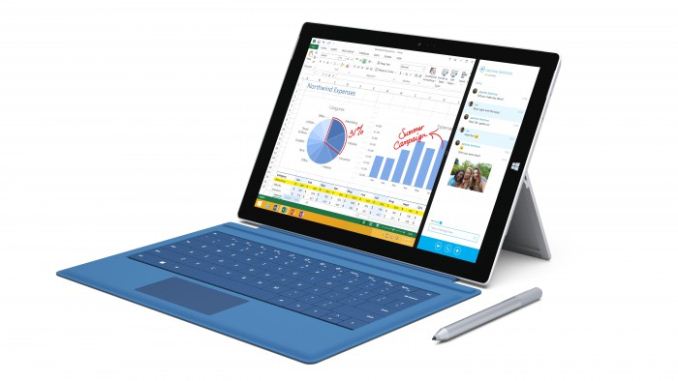 Earlier today Microsoft announced its 3rd generation Surface Pro device, aptly named the Surface Pro 3. This is the first Surface model to deviate from the 10.6" 16:9 form factor of all four previous devices (Surface Pro, Surface RT, Surface Pro 2, Surface 2) and instead standardizes on a 12" 3:2 form factor. The resulting device is also substantially thinner, now at 9.1mm (0.36"). Surface Pro 3 is now somewhere between the thickness of Surface 2 and Surface RT.

The original Surface Pro featured a kickstand that could stay open at a fixed 22-degree angle. Surface Pro 2 added another stop (40 degrees) to the kickstand to allow for more flexible, laptop-like operation. Surface Pro 3 features the same initial 22-degree stop, however it can be opened to any angle beyond that (up to 150-degrees) using a new high friction hinge. The hinge opens with little effort to its first stop, anything beyond that requires additional force. It's enough to feel secure, but not too little that the hinge loses its position. It's unclear how this new hinge will hold up over time but I suspect Microsoft put a good amount of testing into it. 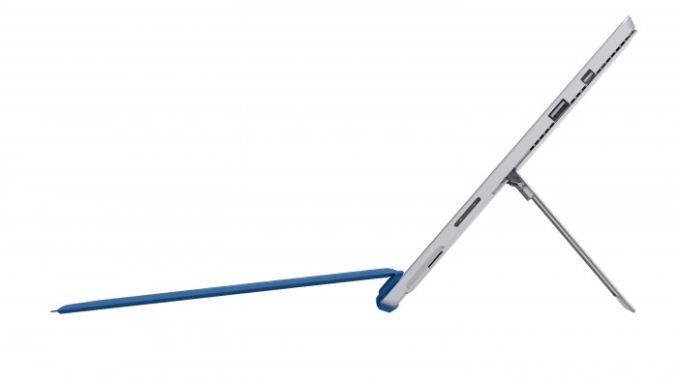 With the device width comes a new type cover with a larger trackpad and secondary magnetic strip. The second magnetic strip can provide a second attach point to the Surface Pro 3, allowing the cover to be a more stable base when used in laptop mode. In practice the new hinge with more stable type cover creates a much more laptop-like base, which definitely comes in handy when typing on your lap. In my brief time with the review unit I still found it to be less stable than a laptop, but it's a far closer approximation to the laptop experience than it ever has been before.

The new trackpad is substantially larger horizontally and features a new lower friction surface. The trackpad is actually a clickpad with left/right buttons activated by pushing down on the lower left/right corners of the clickpad itself. Using the integrated trackpad on previous Surface covers was an exercise in madness that got mildly better last generation. 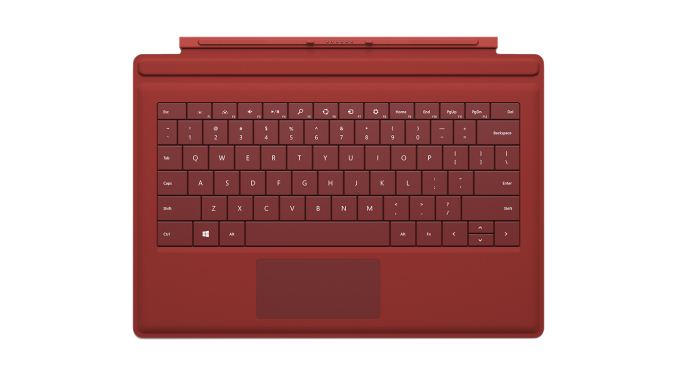 Right off the bat the new clickpad on the 3rd generation type cover is a lot better, but it's still not in laptop-territory as far as experience goes. I'll need to spend more time with it to see if it's truly past the point of being frustrating to use.

There's a new battery powered pen for Surface Pro 3. You lose some pressure sensitivity (256 levels vs 1024), but there are new features that Microsoft hopes will make up for it. I haven't spent much time with the new pen at all so I'll save commentary on it for the full review.

The new design features the same sized battery as previous Surface models. I'm guessing we'll see a reduction in battery life given the new, presumably higher power display, but I'll find out for sure over the coming days. 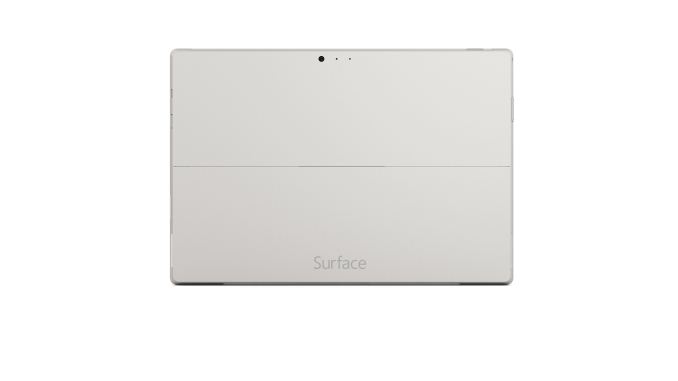 And yes, connected standby is supported. 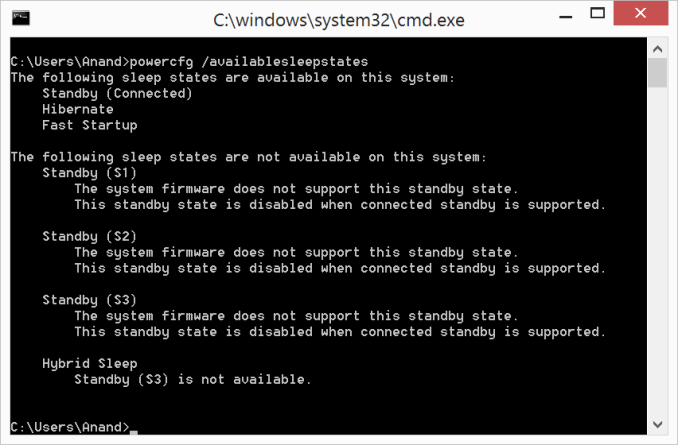 With Surface Pro 3, Microsoft finally accepts that while 16:9 may be a great aspect ratio for watching movies but it's not optimal for a multi-purpose tablet. The tablet features a 12" 2160 x 1440 display (RGB stripe, not RGBW/PenTile), which ends up being a 3:2 aspect ratio. The difference is immediately noticeable in notebook-style use. While the Surface Pro 2 was never quite all that comfortable to use as a laptop, Surface Pro 3's display makes it substantially more laptop-like. There doesn't appear to be a substantial impact to tablet use either with the larger display. Particularly with Windows 8.1's split screen mode, the larger display ends up working extremely well. I'll talk about the new hinge a bit more in the usability section but the aspect ratio alone is a huge step forward. 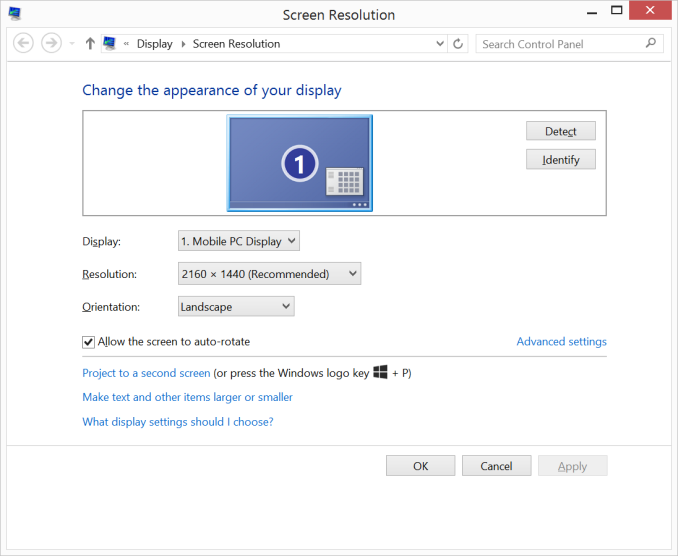 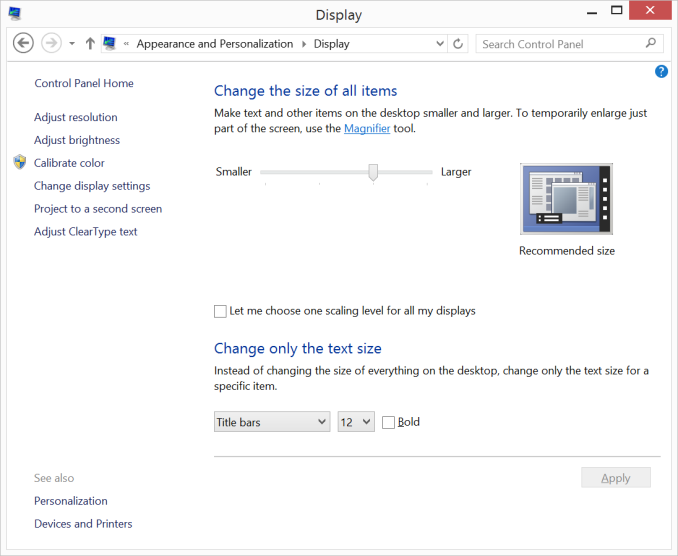 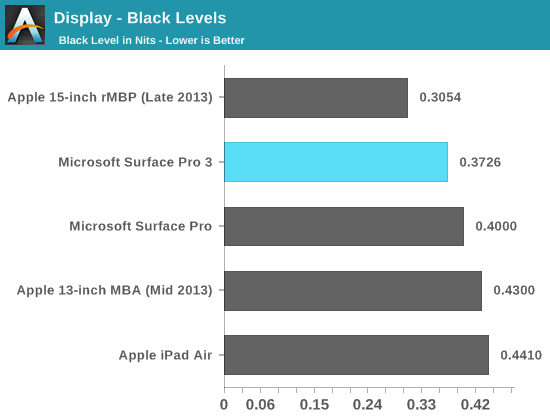 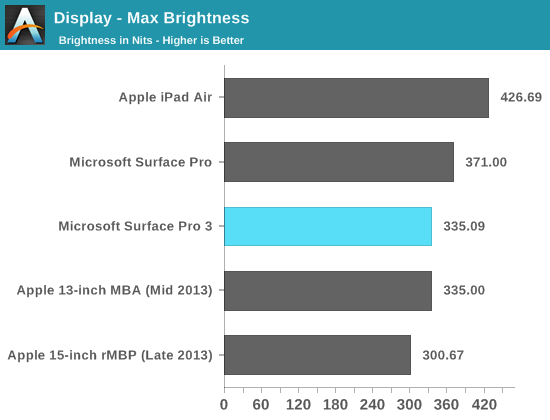 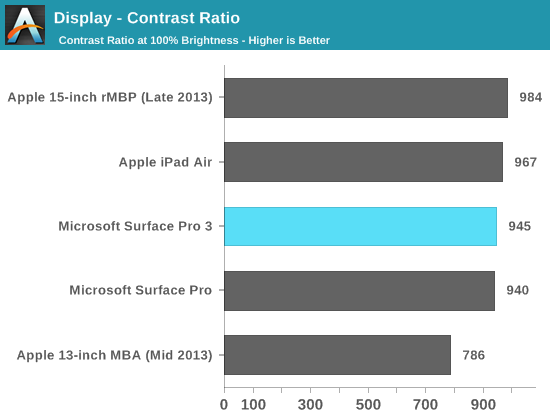 Grayscale accuracy is the biggest issue with the new display, green levels are just way too high: 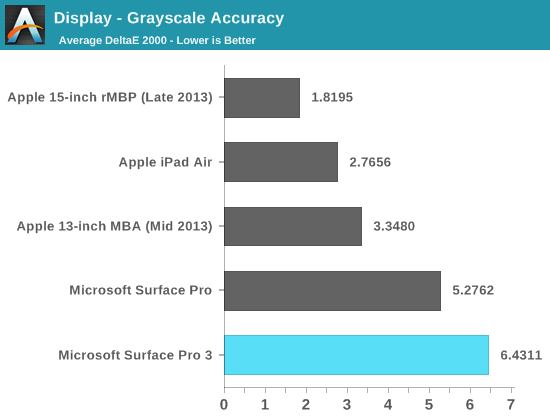 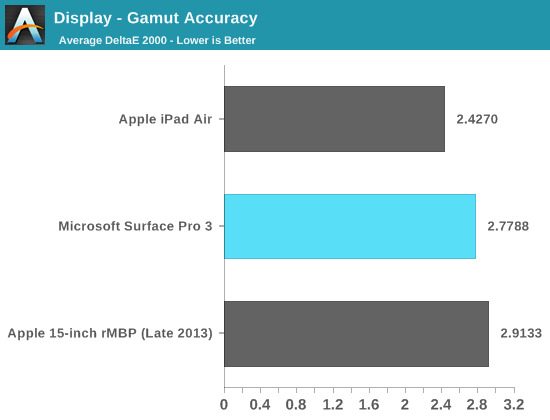 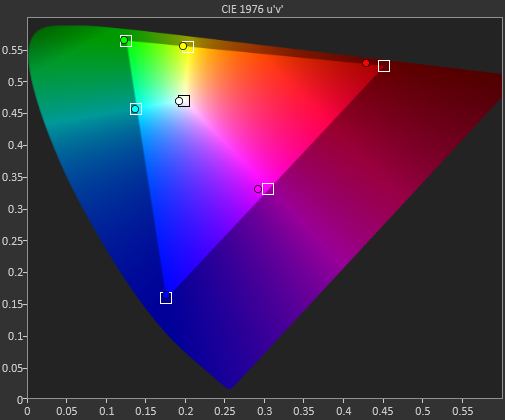 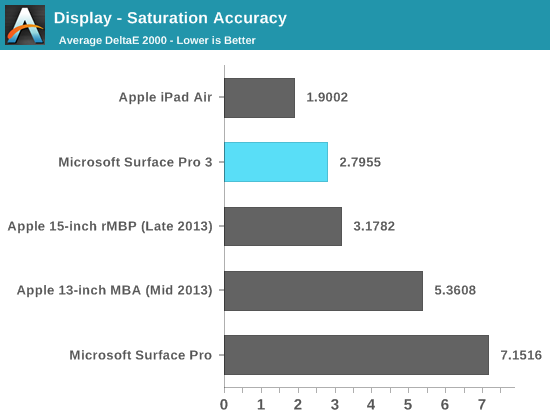 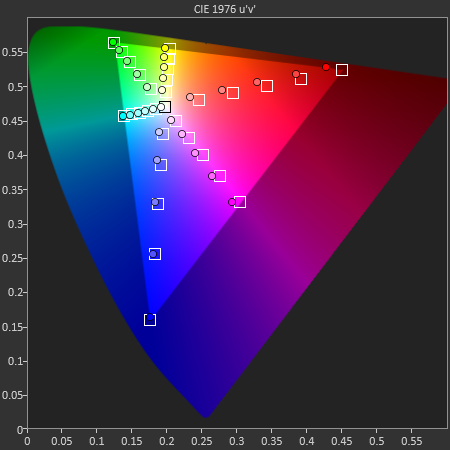 Unfortunately Surface Pro 3 doesn't do so well on our GMB color checker test. Part of the problem is its performance in the grayscale swatches included in this test: 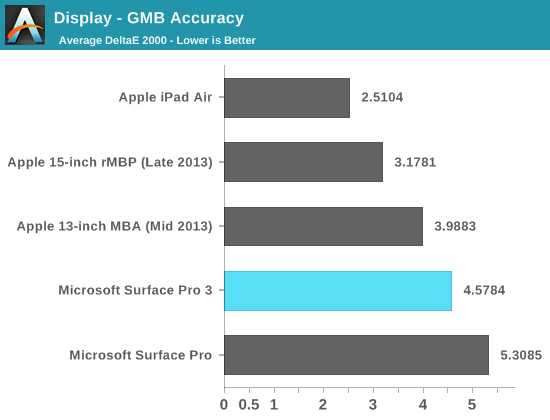 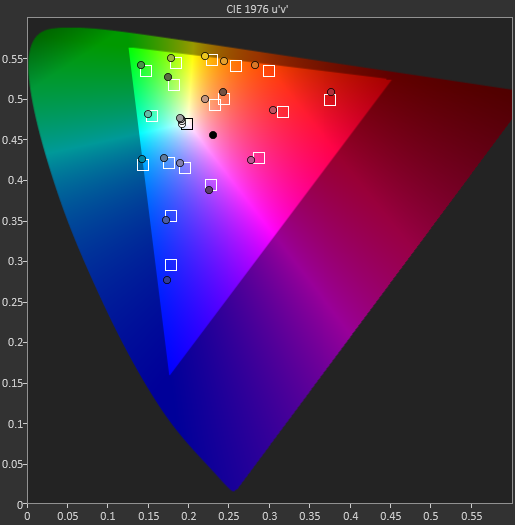 Overall the display is a big improvement over the previous Surface Pro generations, but it's still behind iPad Air territory in terms of color reproduction which is disappointing. Given Microsoft's focus on Surface Pro 3 as an image editing tool, I would've hoped for class leading performance across the board.

Surface Pro 3 still uses a 15W Haswell ULT SoC. My review sample uses a Core i5-4300U (a speed bump of SP2's original 4200U), although there are also Core i3 and i7 options as well. In the case of the i5-4300U we're talking about a dual-core/4 thread Haswell part with a 3MB L3 cache. The CPU cores run at up to a 1.9GHz base frequency and 2.9GHz max turbo. The latter is quite impressive given the incredibly thin (9.1mm) Surface Pro 3 chassis. My guess is that Intel is giving Microsoft the best binned Haswell ULT parts to ensure good performance at low thermals. There are still 4GB or 8GB memory options, although my sample came with 8GB of LPDDR3.

I saw sustained speeds of 2.6GHz while running single-threaded Cinebench 11.5: 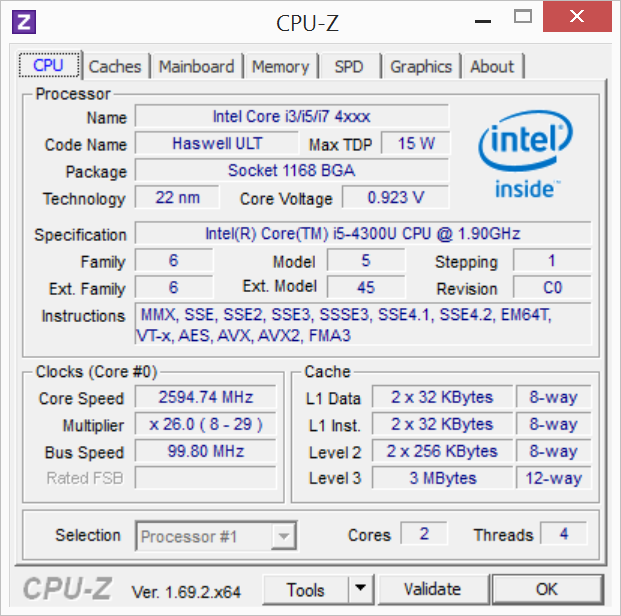 The system's internal fan was definitely audible during the Cinebench run.

On the storage front Microsoft is still using a SATA based drive. It's unfortunate that more PC makers haven't shifted to PCIe, although I suspect that'll come next year with NVMe based solutions (I hope). My review sample featured a 256GB Samsung PM851 drive, this is an OEM version of the TLC based Samsung SSD 840 EVO. 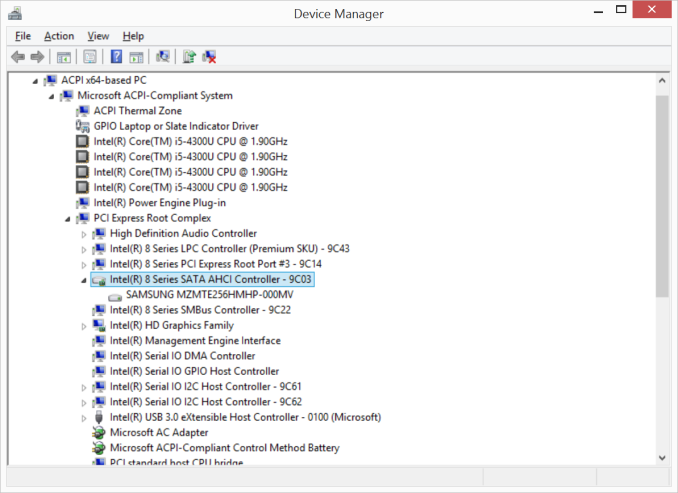 Despite featuring a thinner chassis, I measured performance improvements over both previous Surface Pros. I'll have more data in the final review but here I'm seeing a 3 - 20% increase in performance over the Surface Pro 2. 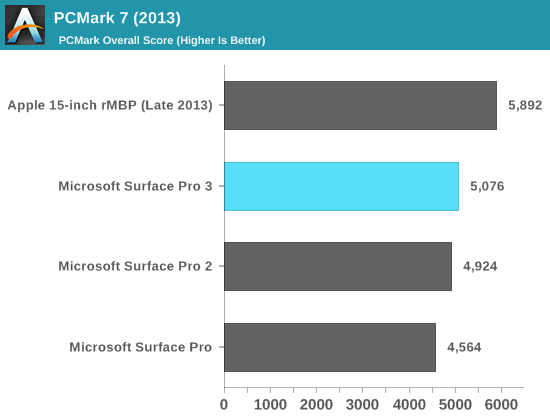 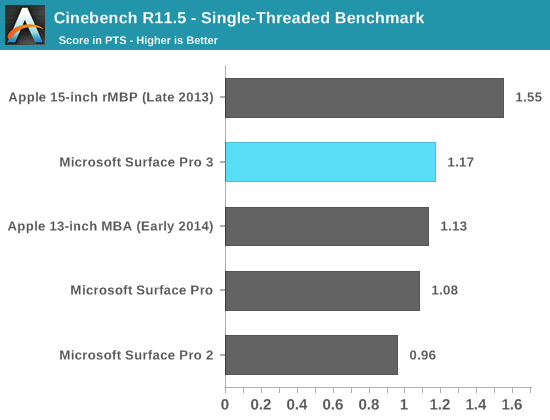 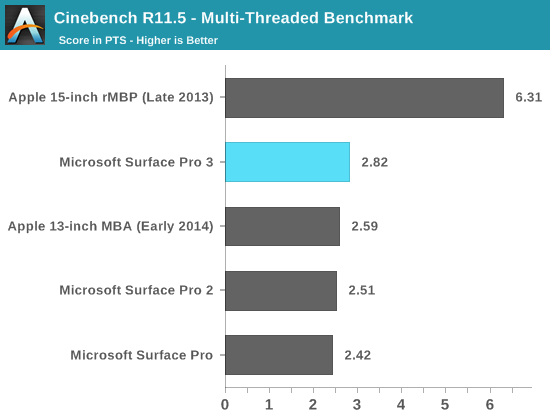 There's a lot more work to do on Surface Pro 3, including substantial battery life testing and continued usage. If there's anything in particular you guys want to see us touch on, leave it in the comments below.